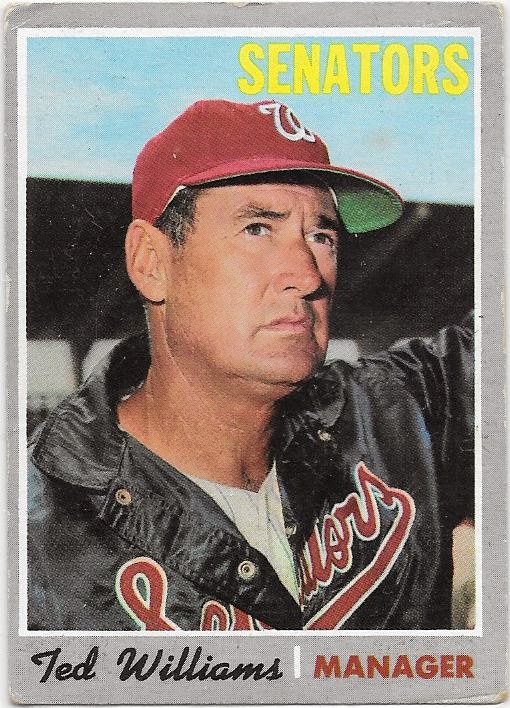 Some players just stick with you, I guess.  There was something appealing, almost mythological about Ted Williams to me.  As a young kid, interviews with the all time great seemed like a true treat.  His gruff, John Wayne persona seemed in stark juxtaposition to the aged legend who reminded me of my grandfather.  And I guess that's what s came down to.  Gruff, yet loving.  Stern and distant yet compassionate and a natural teacher.  The Splendid Splinter was linked in my mind with my maternal grandfather.  I spent most of my summers with my grandparents while my parents were at work.  While grandma taught me how to bake bread or can jam, grandpa was a tireless worker even into his mid 70s.  He was always out working on something, until the summer of 2001 when lung cancer that spread through his body.

That summer I spent more time with the man than I had in all my previous 12 years combined.  And the life lessons he taught me that summer as his life slowly drained away have greatly shaped the person I am today.  Just weeks after the Dbacks took down the Yankees in the World Series, the cancer finally won.  I cried, we mourned, and life kept moving.  Less than a year later I was sitting in my grandparents back room watching Espn when breaking news interrupted the taped Sportscenter broadcast to announce that baseball great Ted Williams had passed away.

While it didn't even seem logical at he time, I could feel the tears immediately streaming down my face. A man I had little connection to beyond my great admiration for his ability to hit a baseball had died.  But suddenly the wounds of the previous summer felt opened once again.

A few weeks later my latest copy of Beckett came in the mail, recognizing the all time great.  Included was an article ...yes, they once had articles! on affordable Williams cards, highlighting his 70s releases from his coaching days.  The idea that Ted Williams could wear any hat but the Red Sox blew my teenage mind.  But the idea that these cards, unlike the gems of the 50s, could actually someday fit my collection?  For years the cards were mainstays on my Christmas lists, but always eluded me.  Even as my budget and collecting outraced expanded, the cards remained on my want list, but always slid in behind my other collecting interests.

And then there I was the other weekend flipping through a box of $2 vintage cards when that familiar stern expression was looking back at me.  I could feel myself shaking ever so slightly, memories of those summers with my granarents seeping in for just a moment.  It took me over a decade, but finally I have a vintage Ted Williams card in my collection.  It's my most valuable, rare, or unique card.  But it will be one that will always mean far, far more to me than a piece of cardboard could ever possibly let on.