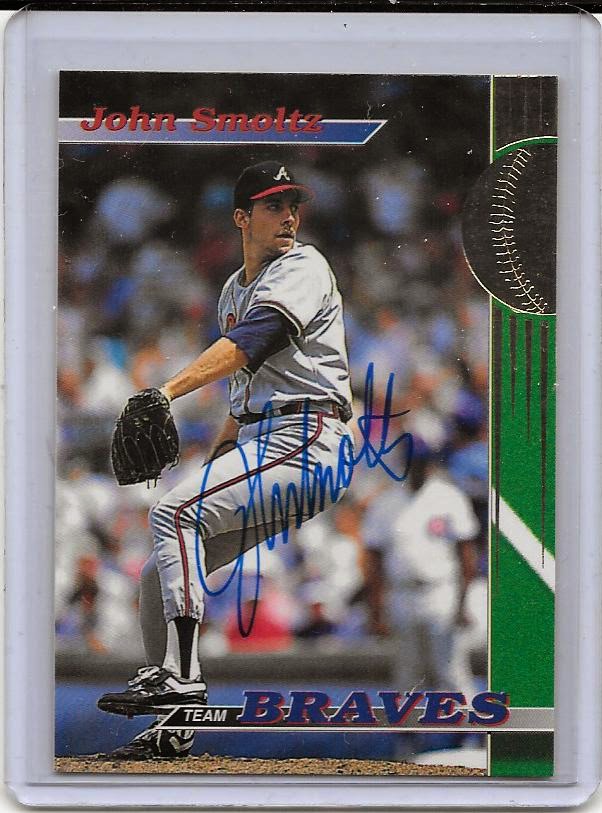 Last weekend I was up to my usual "I'm bored and searching ebay" routine.  Probably not the most effective use of my time, but I typically have a few different go-to searches that I like to check once or twice a week.  While searching for Pirate cards, I saw an auction ending that day for a poorly listed Jack Wilson card I have never seen.  But that's not the story for today.

Seeing the poorly listed title, I figured I would check the seller's other auctions to see if there were any other deals to be had.  Immediately a few nice autographs, including a Bob Feller IP auto with no bids were more than just cause to scroll through the rest of the search results.

I don't think Smoltz has many autographs out there, and the card would be a nice addition to the cornucopia of no-name players and 90's minor star autos that I've been building.  I put in a bid, went and did some other things, and thought nothing more of it.  I mean...odds are there are some Brave fans who value this card far more than I possible could, right?

Wrong, apparently.  I was the only bid, so after tacking on another $.50 for combined shipping, I have a John Smoltz auto in my collection for less than the price of a medium Frosty at Wendy's.  Not bad, if I do say so myself.