Throwing the Budget Out with the Bathwater 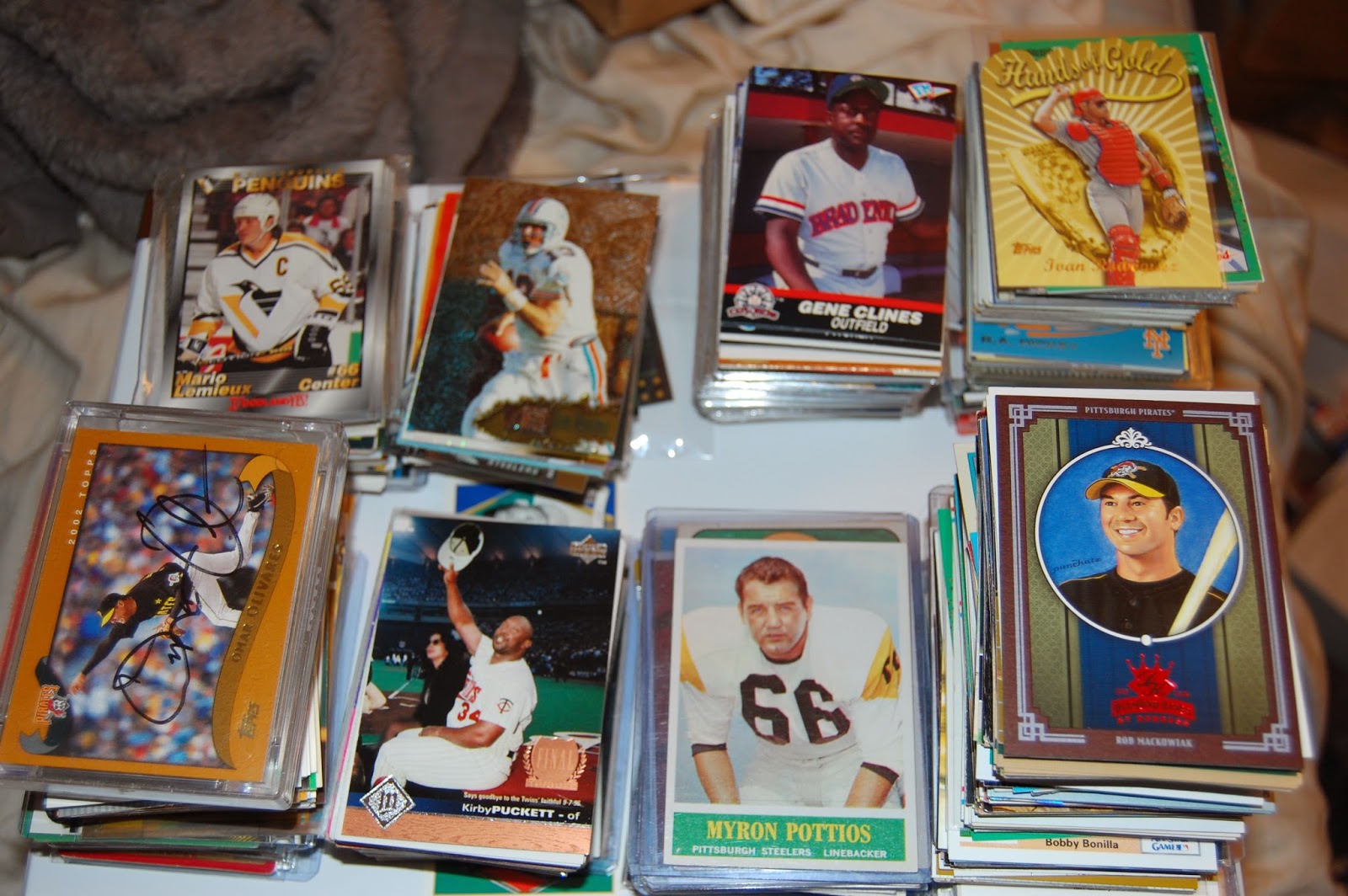 Any regular readers know that when it comes to collecting I'm a bit thrifty.  Thrifty.  Stretching the budget.  Frugal.  Fiscally responsible.  Yep, those are the terms I prefer.  Kate has a different verb: cheap.

And to be truthful, there are few things I enjoy as much as digging through dime boxes.  But sometimes life gives you a large room full of sports memorabilia.  And sometimes, just sometimes, when things fall just right you find a dealer or two who are selling mindblowingly amazing items at great prices.  And as they say "when life gives you fantastic prices on sports memorabilia, make financially questionable decisions."

I'm still trying to figure out exactly how to break up the posts of my haul from this past weekend.  Honestly, a few posts of some baseball cards won't even tell half the story.  Oddball memorabilia.  Action figures.  Bobbleheads.  And high end sports memorabilia that would be worthy of any man-cave.  My dime box finds are getting left in the dust this week. 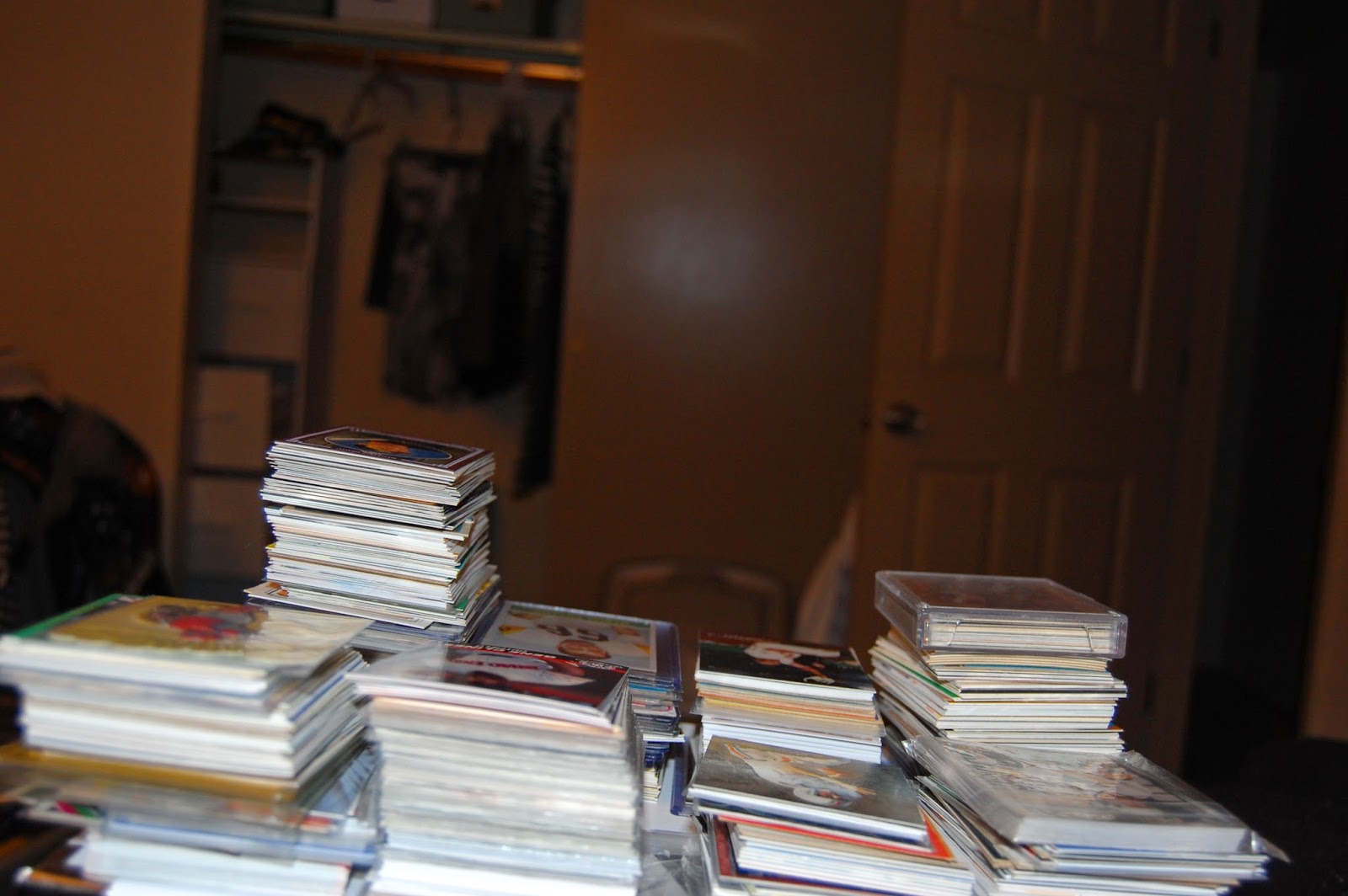 The show started pretty innocently Friday afternoon.  I got there right around the time doors opened, and immediately followed my usual show process of scoping out the room and prioritizing deeply discounted and modern tables.  It yielded early successes, including some heavily discounted vintage cards.  I'll get back to that stuff later, though.  After hitting all my "target" tables, I wandered around to see what I may have overlooked.

I noticed a dealer with two monster boxes of Pirate cards that hadn't been there when I first scanned his isle a few hours earlier.  It happens - deals are made, items are flipped, and new inventory is put out throughout the weekend.  The boxes looked like a lot of overproduction wax, but I figured I'd at least ask a price.  In a thick Bostonian accent, the dealer replied " how about .02 a cahd."

Wait.  Two cents?  You didn't get the decimal place off there, pal?  I started my dig, pulling out about 300 cards (50 or so ended up being doubles once I got home and checked my spreadsheet).  But here's where things got good.  While I was penny box digging, this dealer was wheeling and dealing with his other customers.  The guy is an excellent salesman, and I knew he'd be trying to sell me on some more stuff once I finally came up for air from penny heaven.

What I didn't realize is that he would actually have things I would want! 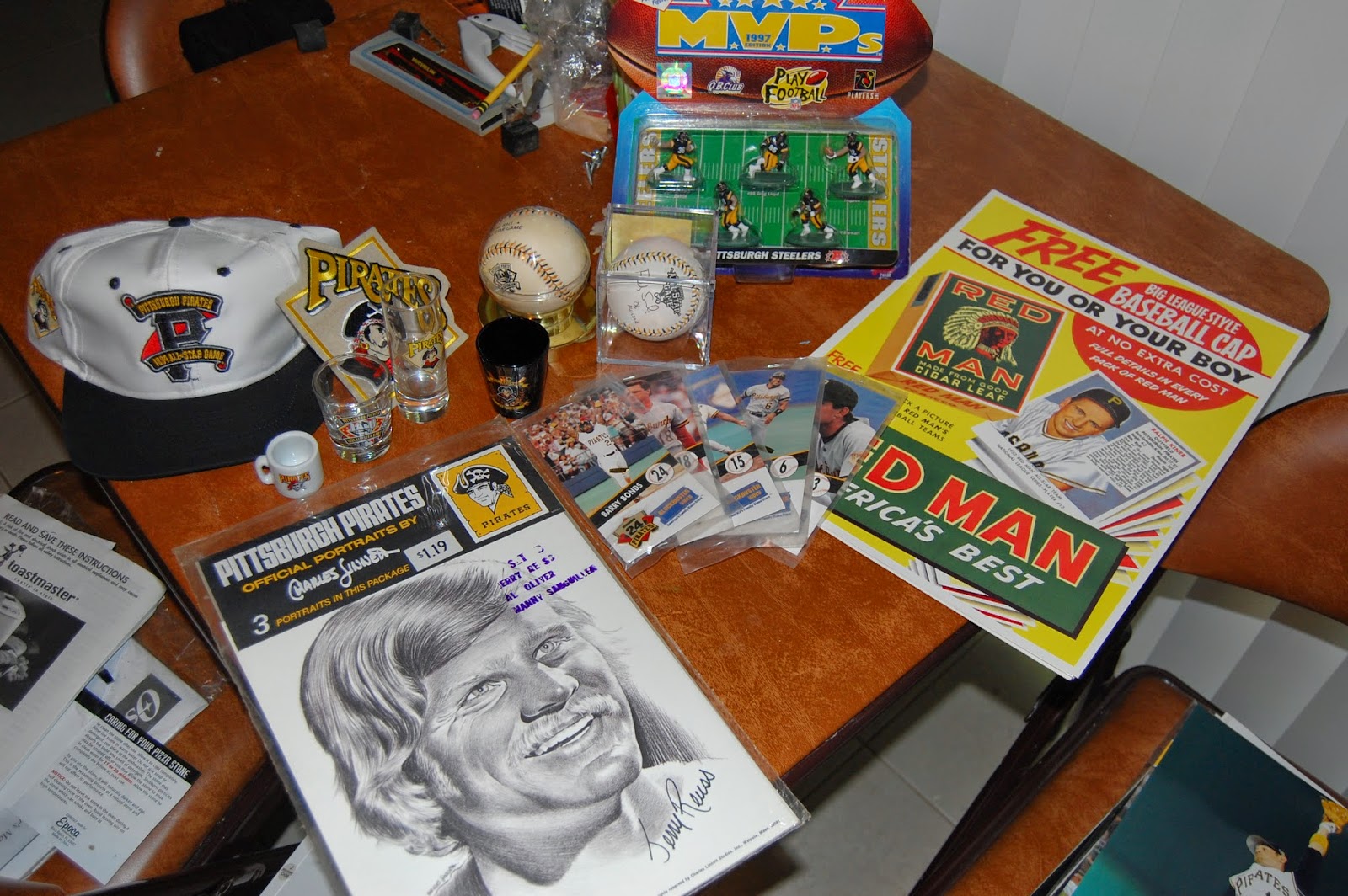 Fast forward an hour and all of that pile was coming home with me, mostly at dirt cheap prices.  The guy is a dealer from Boston who deals in wholesale oddball memorabilia.   And the prices were just too cheap to pass up.  I don't even drink more often than a casual drink a few times a year...but now I'm the proud? owner of three Pirate shot glasses, including one from the 1994 All-Star game.  At a buck each, why not?  Sure, let's throw in a 94 ASG hat.  And a commemorative pin set from the early 90's?  Never saw that before.

The Red Man tobacco ad featuring Ralph Kiner is a fairly racist piece of advertising memorabilia.  The two baseballs pictured were the real gems of the day (bonus points to anyone who can correctly guess what the balls are!), but they deserve their own post down the road.  I was ready to call it a day and head home with a decent chunk of my budget for the weekend gone.  But my new friend Jim had one more trick up his sleeve. 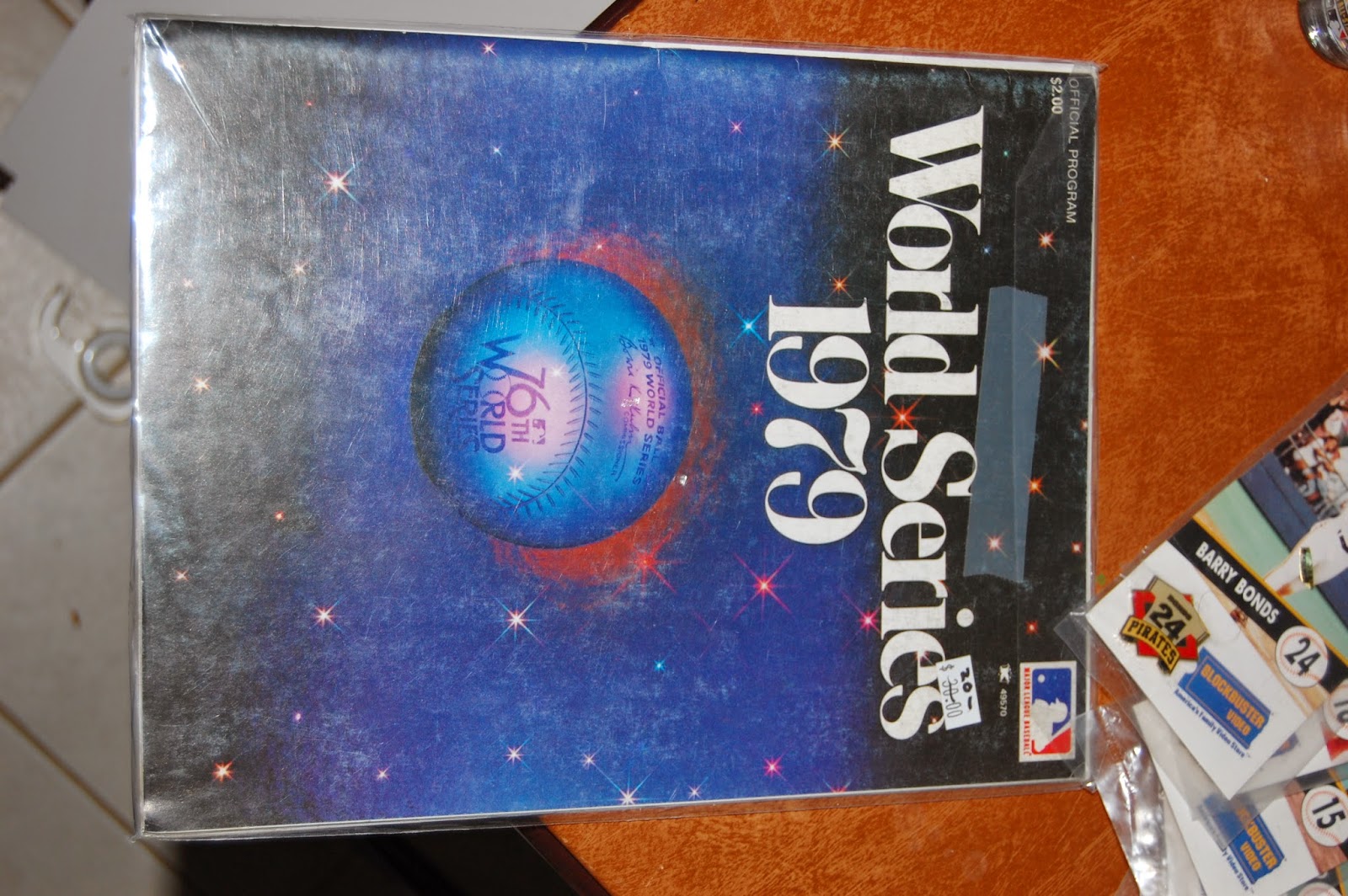 I had been looking to pick up a '79 World Series program for a while now, but most copies on ebay go for more than I was willing to spend.  But seeing a copy in person...the book is in great shape with pretty sharp corners and minimal wear along the binding.  And my bundle price?  Well, it came in much lower than the cover sticker. 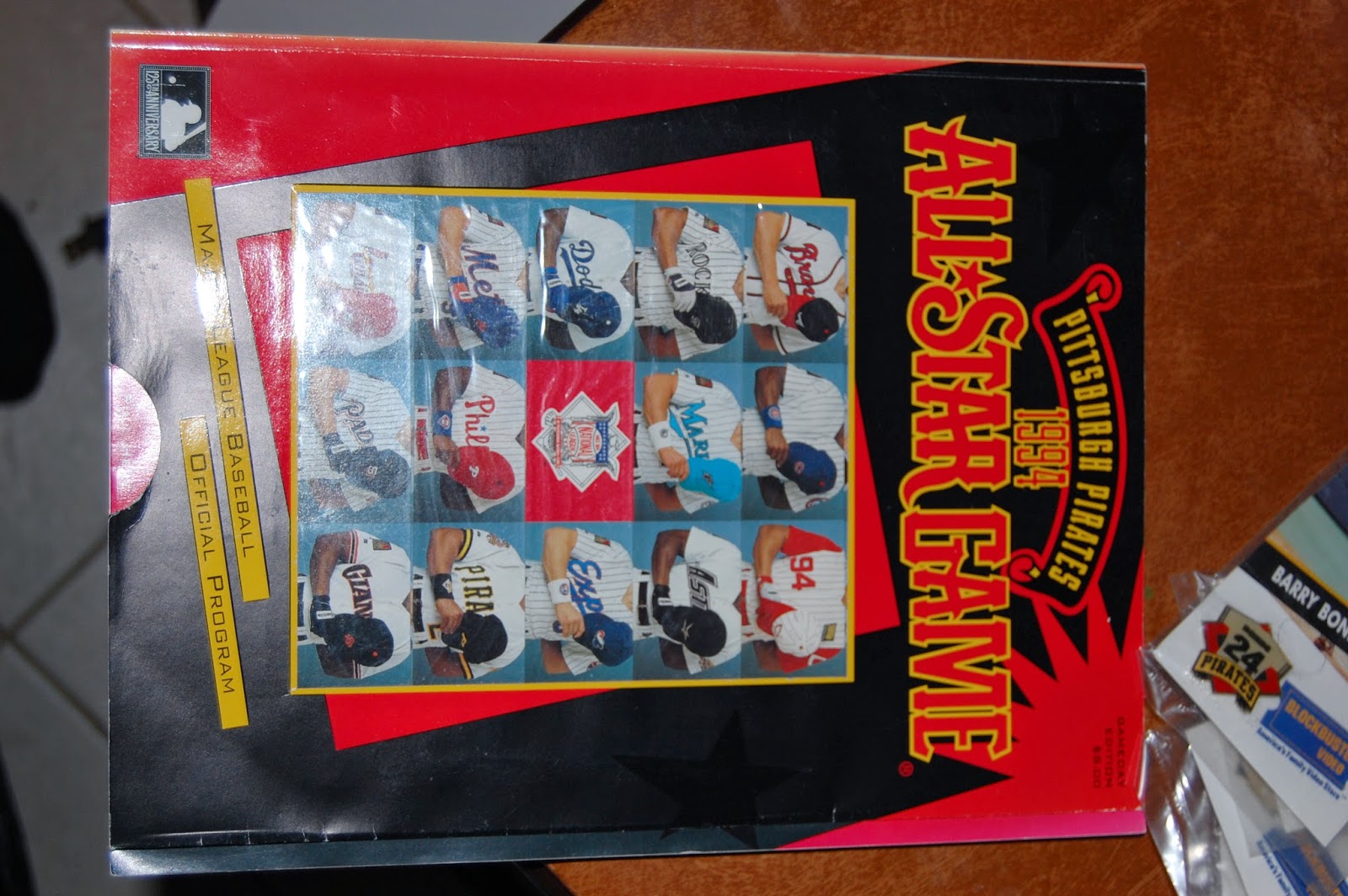 And then dropped some more when I saw these two.  The 1994 All-Star game program features a pull out tab with the league uniforms on it.  It's actually a really cool program, and I've been compiling a pretty nice collection of 2006 and '94 ASG memorabilia in recent months.

But I'm saving the best for last.  While my collecting interests continue to go all over the place, at heart I'm still a player collector.  Jack Wilson will always be "my guy," and with card additions coming in few and far between, I've turned my attention to expanding my collection a bit.  I had no idea until a few months after the game that the 2006 ASG program featured the '04 and '05 Pirate representatives, Jack Wilson and Jason Bay respectively.  It's one of those oddball pieces I love to have, but I had never seen a copy in person.  The only one I had seen until Friday was one an online friend got signed at Piratefest some years ago.  Into the bundle it went! 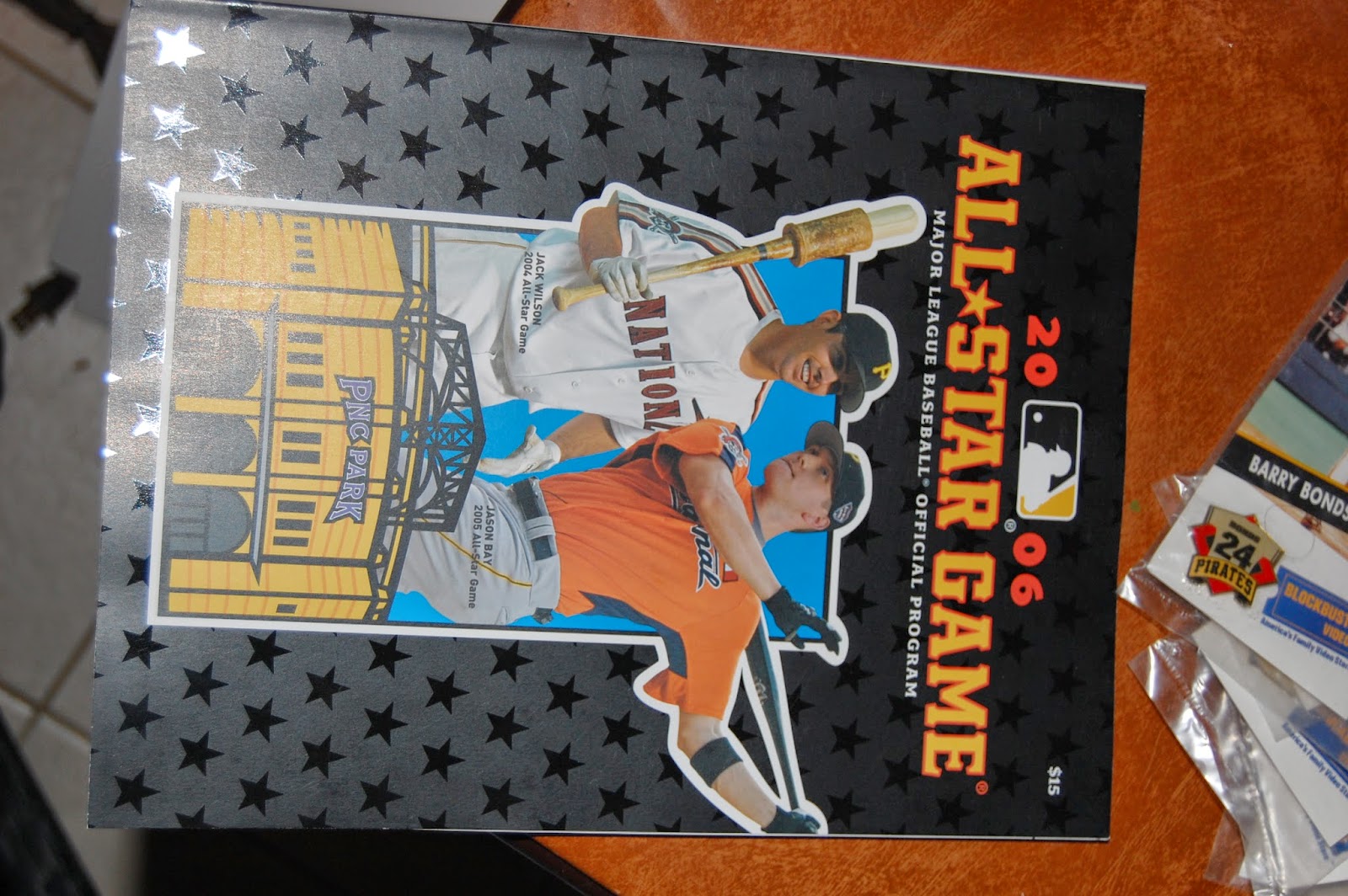 Heading out to the car Friday night I was seriously considering just calling it a show.  I spent a decent chunk of change, picked up some great new items, a few hundred new cards, and was more than content with my purchases.

But when I got home I found out Kate had made plans to spend Saturday to go outlet shopping with her mom and sister, figuring I would be spending the day at the show.  So go to the show I did.  And the results?  Well, you'll have to check back for those.  But let's just say I have a new centerpiece to my collection.