Attempting to obtain autographs of every player to play for a team is undoubtedly a challenging endeavor.  But I think anyone undertaking a similar project would tell you that it's also a journey that can take you into the forgotten nooks an crannies of a team's history.  While it's easy to get caught up on getting an autograph from your favorite player or knocking off a high dollar Hall of Famer, it can be just as exciting to knock off the journeyman utility infielder who produced 230 forgettable at bats.  And sometimes you discover a player you never even knew existed.  Ever.

I added about a dozen new Pirate autographs this week between TTM returns and a purchase from Brian at abcunlimited; but none were as interesting as Dennis Konuszewski.  When I first noticed his name on my master list of Pirate players, I had to do a double take.  This must be some minor leaguer who briefly appeared on the 40-man roster but never played in Pittsburgh.  Or perhaps a spring training invite who was cut long before camp broke.  It wasn't out of the question.  The master roster pulled directly from the Pirates site was riddled with Einar Diazs and Rudy Owens,' players who made it just close enough to Pittsburgh to be documented somewhere, somehow, but who never actually wore actually spent a day on the regular season roster.

But a quick google search confirmed that Dennis Insanelyobscureyetcomplexlastname had been a major league baseball pitcher for the Pittsburgh Baseball Club in the year nineteen hundred and ninety-five. 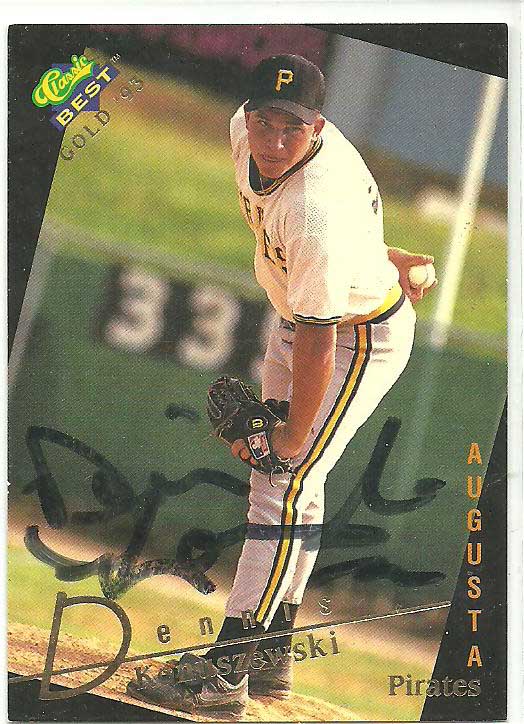 This project has been a fun aspect of my collection, but also a foray into baseball's past.  I have learned about countless players who played, and sometimes died, long before I was even born.  I have committed to memory the trades for Tommy Helms (for Pittsburgh native Art Howe) or AAA home run total of Ted Savage (24 in 1961) as if I had watched the players while growing up.  But here was a player who appeared in 1995 - when I was 7 years old - who I not only didn't remember, but had never even heard some mispronounced abomination of his last name uttered in passing.  No vague recollection of a bad pun or nickname on SportsCenter or Baseball Tonight.  Nothing.

And perhaps there's a reason for that.

On August 4th, 1995, Dennis Konuszewski pitched one third of an inning in the Major Leagues.  He recorded exactly one out, on fifteen pitches, while facing five batters.  Of those five, four reached base, scoring two runs.  One out, three hits, one walk, two earned runs.  Add in a pinch of rosin, and bake at 350 degrees, and you come up with a 54.00 ERA.

Konuszewski had been been called up directly from AA after a solid, yet underwhelming season.  A 7th round selection, he pitched to 3.65 ERA for the Carolina Mudcats in his second go-round in AA, with a 48/26 K/BB ration in 61 2/3 innings.

The details of what exactly brought the righty to Pittsburgh seem lost to the vastness of the internet, and perhaps the Pittsburgh Post-Gazette's paywall.  Presumably, he was little more than a spare bullpen arm.  The Pirates played a double header that day, blowing a 5 run lead in the first game, but using only two relievers.  The bullpen had seen little action in the days leading up the the double header, so presumably there were fresh arms available.

Still, when starter Steve Parris was lifted after 6 innings trailing 3-2, Jim Leyland turned to the AA callup as the first reliever out of the pen.  Perhaps he wanted the rookie to get his first taste of big league action.  Maybe he thought he could minimize the Konuszewski's exposure against the 8-9-1 hitters, turning to more experienced arms to close out the game.

Regardless, he walked the first hitter, and then gave up a single the pinch hitter.  Leadoff man Brian Hunter advanced the runners on a sacrifice bunt.  Back to back singles to the left side of the infield by ex-Bucco John Cangelosi and HoF'er Craig Biggio brought in two runs, knocking Konuszewski out of the game and out of the majors.  He would pitch only 3 games in AAA in 1996, and would retire from baseball after a 4th stint in AA to begin the 1997 season.

This very well may be the longest writeup on Dennis Konuszewski's baseball career.  But however brief his time in the majors, it may in fact make his accomplishments and the circumstances surrounding them all the more unique and interesting.  Each franchise has scattered occurrences of such players throughout their history - some, like Archibald "Moonlight" Graham or Adam Greenberg take on a life of their own in the telling and retelling of baseball lore.  Others, like Konuszewski, fade into a vast and complex tapestry of baseball history; by no means integral to the history of their team, but yet central to the narrative of that team's history

Email ThisBlogThis!Share to TwitterShare to FacebookShare to Pinterest
Labels: autographs