I somehow managed to blow through sorting my new box of Pirates in record (for me, at least) time, with an assist from Netflix, getting everything sorted and entered in about 3 days.  I'll post the best of the box later this afternoon.  But I wanted to hit the pause button for a moment to highlight one special card in the box.

Well, maybe not all that special.  But certainly a cool milestone. 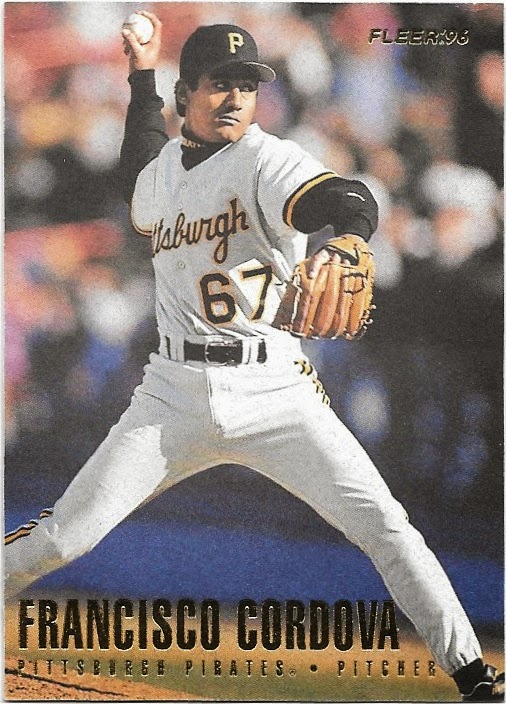 1996 Fleer Update Francisco Cordova.  Also known as the 14,000th Pirate card in my collection.  Granted, the title is a little arbitrary.  Had I started cataloging a different stack first, it simply would have been another of the 404 new cards I added from the monster box.

It's kind of crazy how much my collection has grown in recent years.  A few years ago, I remember being blown away that I hit 6,000 cards.  I make no bones about the fact that I enjoy quantity over quality to some extent.  I'd rather see my 1988 binder full of complete sets from all the manufacturers for that year than pick up a patch auto booklet.  I love the simplicity and uniqueness of base cards.  I love the fact that I can have over 100 different cards of Francisco Cordova, a guy who literally came out of nowhere (well, technically Mexico) in 1996, was perhaps the Pirates best pitcher through the late 90's, was part of a memorable combined no-hitter, and was out of baseball after 2000.

Guys like Cordova make collecting fun for me.  The sheer number of sets he appeared in.  The subtle differences in design and photo selections between companies that you notice when you've stared intently at the entire team set in a 9 pocket page together.

There are days I certainly wonder if it would have been easier to just stick to single, mid-high end cards that I liked.  That's how this all started, after all.  As new Jack Wilson cards slowed down, I wanted to collect a certified auto of every player pictured as a Pirate.  At the time, I think there were something like 125 players, including minor leaguers.  Pretty quickly I shrunk that list down to the last 10 or 15 players, who were much tougher to track down.  So I started adding some inserts or parallels here and there.  Refractors, numbered cards...just rounding out the collection a bit.

I had a decent number of Pirates base cards from my childhood, stuff people had sent me, etc.  But they were just haphazardly in boxes, and nothing that I gave much time or attention to.  Somewhere around 2007 I decided to start entering all those Pirate cards into file and creating a website for my full Pirates collection.  I was a college student with too much time on my hands, apparently.

I think I had about 4,000 cards at the time, the bulk of which were either Jack Wilson cards or came from a massive 3,000 card gift from a message board member.  In the next 8 years, I sorted and resorted the collection far too many times, added cards through shows, bulk lots, trades, and a great group of team collectors.  I went from a shabbily organized Excel file to a comprehensive tabulation of my collection.  From scattered boxes to (nearly) organized binders.

So Francisco Codrova, pitching in his rookie season probably during a cool September game on the road, printed on some really flimsy card stock.  Maybe it doesn't mean all that much.  But it's a reminder of how far my collection has come, the fun of each new pickup, and how much fun you can have with 2.5X3.5 pieces of paper.
Posted by Mark at 10:03 AM