The card show this past weekend included an unexpected purchase, which resulted in my carrying an entire 3 row box of Pirates out to the car, and wondering if it's time for me to join Collector's Anonymous.

But it was well worth the $20 investment.  When the dust settled and cards were sorted, I landed 404 new Pirate cards for my collection, and have almost an entire box full of some really nice doubles.

But enough chit chat.  Let's see some of what the box had to offer.

Since I've been (largely) trying to avoid wax since 2007, it can be tough to track down the cards I need to finish off base sets.  The hobby has changed a lot during that time, as have the hobby avenues.  One of my favorite things was, and still is, digging through a dime box for Pirate commons I don't have.  In the early 2000's, a combination of having a LCS that was always full of dime boxes and some great local card shows always made it easy to find a stack of 100 new cards to add.  Add in my wax buying tendencies, and I was usually able to keep up with the major releases. 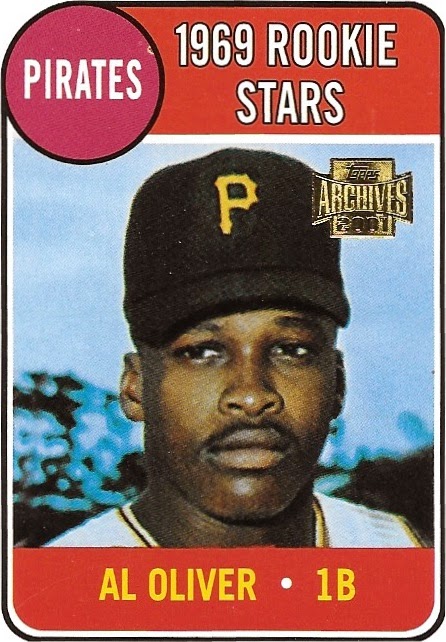 But major is the key word there.  Do you remember the early 2000's?  There were sets galore.  And some of the flops like Fleer Hardball or Double Header meant that very little of that product ever trickled out into those commons boxes.  Heck, to this day the only cards I have from either of those sets are the 3 or 4 cards I have from packs I busted when the product released.  Could I probably pick up the other cards for $.50 or $.60 on Sportlots or COMC?  Sure.  But that's just not my style. 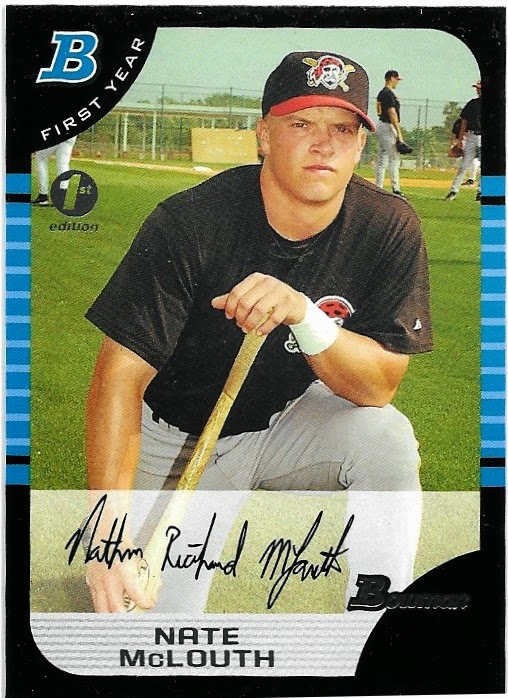 But the thing is that I'd gladly have the days of not being able to keep up with all the sets releasing.  Walking into the LCS was always a treat - it seemed like each week the shelves would be stocked with at least one or two new products.  And like a wine tasting, I'd try a pack or two of this, another 3 of that.  If I found something I really liked, I'd grab a box.

But some stuff just slipped through the cracks.  Like the Bowman 1st Edition card above.  The set was a HTA (hobby shop, basically) exclusive.  No inserts, no hits, no parallels.  Just a little 1st Edition stamp.  But boxes were still around $50, if I recall correctly.  Apparently Topps thought they could find the same winning formula as Pokemon cards, and add a stamp to magically see value skyrocket.  Needless to say, I imagine a lot of this stuff is sitting...somewhere. 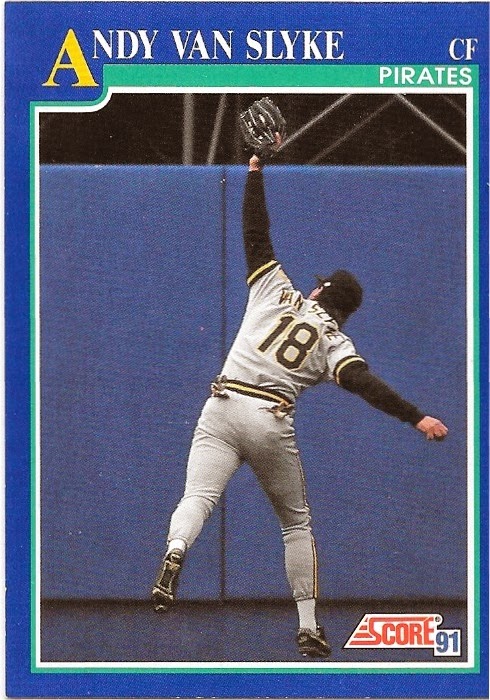 Having an entire fresh dime box to pluck through was a pretty exciting experience.  I knew I would find new cards.  And of course there were thousands of familiar designs and photos.  Maybe it just says something about the incompleteness of my own collection, even with 14,000+ cards...but I find something cool about the fact that I can come across a card as common as 1991 Score that I need to finish off my team set.  Somehow Mr. Van Slyke's acrobatic sprawl to catch the ball had eluded my collection in my countless dime box adventures, 2,000 card lot purchases, and thousands of junk era wax doubles. 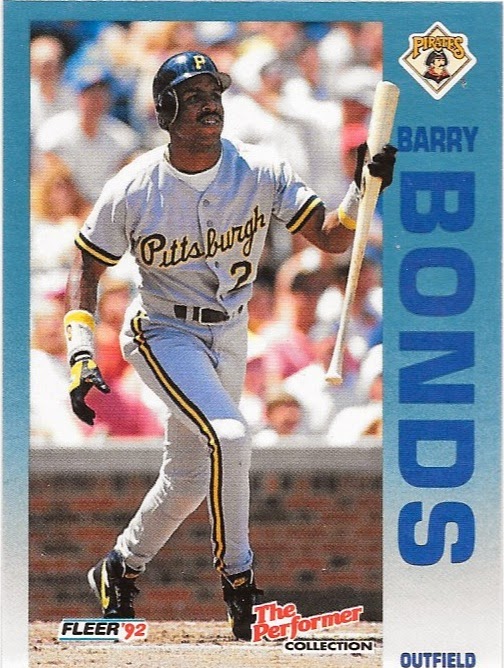 But hands down the highlight of the box was the number of oddball early 90's cards I found, mostly of Barry Bonds.  Bonds cards are just flat out tough to find, and many of my 90's needs are his cards.  One of the new additions was a 1988 Donruss Bonds common.  I have at least 10 copies of every Pirate from '88, but again...no Barry.  I assume in the early 2000's every single copy of his card was gathered and packaged in lots.  Any Pirates stuff meant early career, which presumably resulted in some grandmother looking for a "old and valuable investment" for her grandson paid $2 for a common that has another 9,999,9999 copies just like it out there. 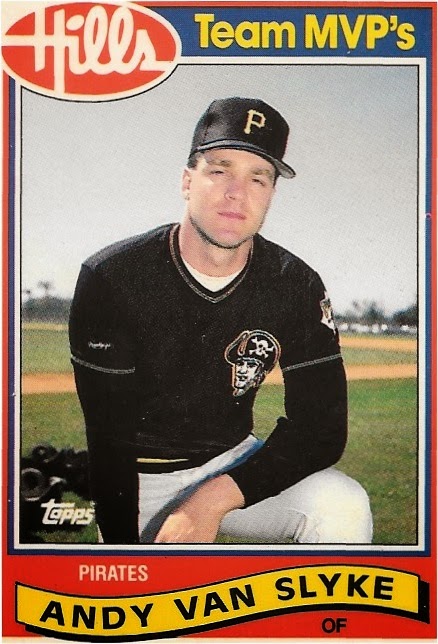 But the gem of the box was unquestionably this Hills Van Slyke card.  For the uninitiated, Hills was a department store chain that was largely anchored in the PA/OH/WV area.  They eventually got gobbled up by Ames in the late 90's, breaking my heart and opening up real estate for the soulless Wal Mart empire that I pass every 4 miles today.  But I digress...

Hills was my childhood Mecca.  When you walked in the door, you were met with the smell of popcorn and hotdogs at the small food stand right inside the entrance.  Any trip absolutely had to include a hot dog and popcorn, and maybe a Slushie if mom was feeling overly generous.  The store always had a well stocked selection of WWF action figures and Starting Lineups.  And I vividly remember how large their clearance toy section was, having the full back wall.  I know I added a lot of less desirable SLU's (Rob Dibble, Ramon Martinez, Dean Palmer) from that clearance wall - 1991 and '92 figures that I know I couldn't have purchased any earlier than late 1994 or early 1995.

It was a magical place as a kid, and from the best I can gather a pretty good department store for the folks who desired things beyond hot dogs and toys.  I learned a couple months ago that Hills exclusive sets existed, and finally crossing this card off my want list had me as giddy as a 6 year old.  Now if I can just find a store that has a huge section of SLU's... 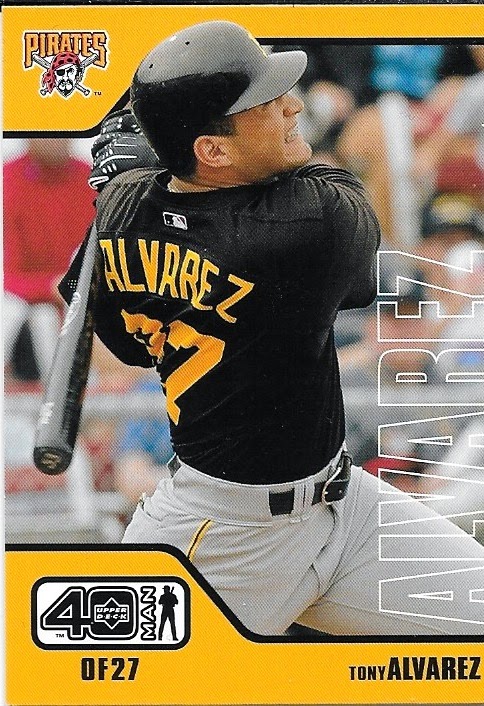 While less magical, the rest of the box had equally exciting finds.  My binder pages for the insanely massive 2002 UD 40-Man set were pathetically empty.  The stack of 20+ cards I found will help me make a dent in the set.  But just a dent.  Ugh. 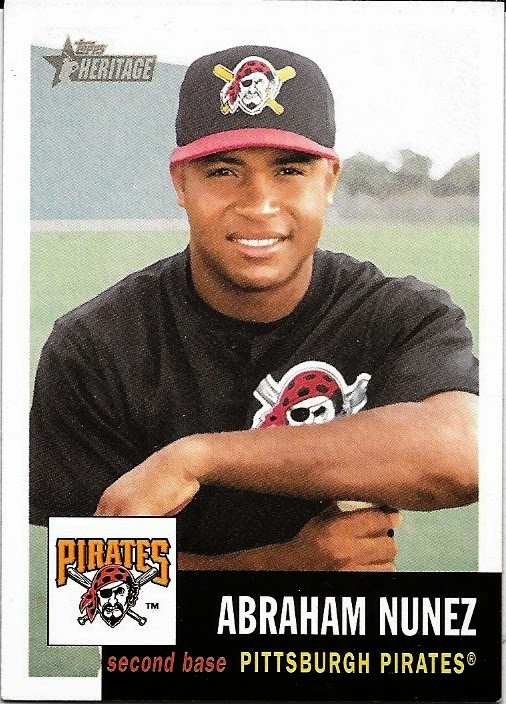 While the cards in the box spanned from 1982-2011, the bulk of the cards were concentrated in the 1991-2009 range.  While those should theoretically be the years that I have best covered, I was surprised how many new cards I came up with. 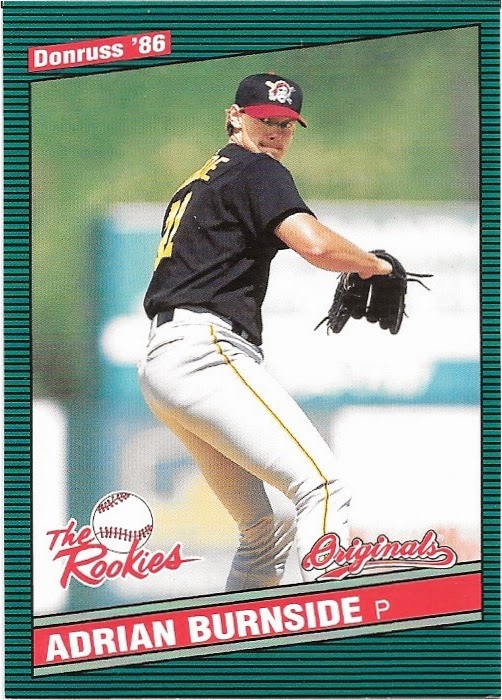 The real fun in digging through a box this size is just seeing how many different card designs and styles there were.  The hobby has changed a lot since Topps got an exclusive license.  I know I end up sounding like a broken record, but the move away from baseball cards has nearly extinguished my interest in modern cards.  It's not my irritation with a hit-driven hobby.  It's not my inherent cheapness.  It's not the fact that I hate monopolies.  All those things are in play.  But I miss the fact that you could line up all the cards for a player - let's say Barry Bonds - for a given year. 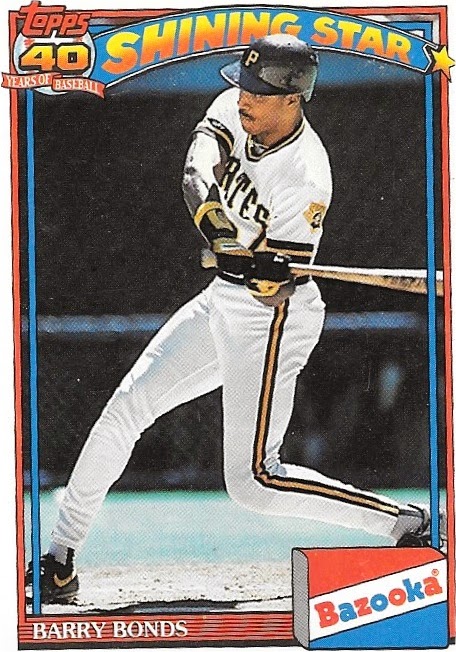 Across the manufacturers you'd see home photos, away photos, fielding shots, running shots, batting shots.  It's a snapshot of the season, captured frame by frame.  Today Topps uses Getty images for current players, and frequently recycles the images.  You'll see the same photo, cropped 5 different ways, with another 10 different photo effects applied over the course of the year.  Or better yet, for the next 4 years.  Should it bother me as much as it does?  No.  But it sure does. 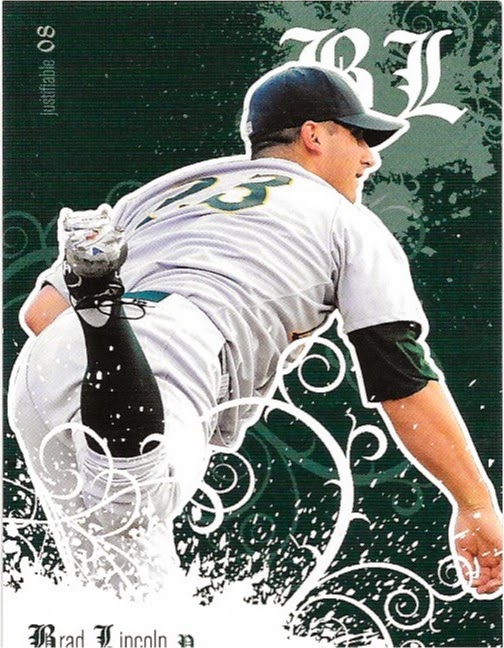 Speaking of photoshop central...anybody else remember thinking how hideous these cards looked when they came out?  Anybody see vague design similarities to Bowman cards from the past 3 years? 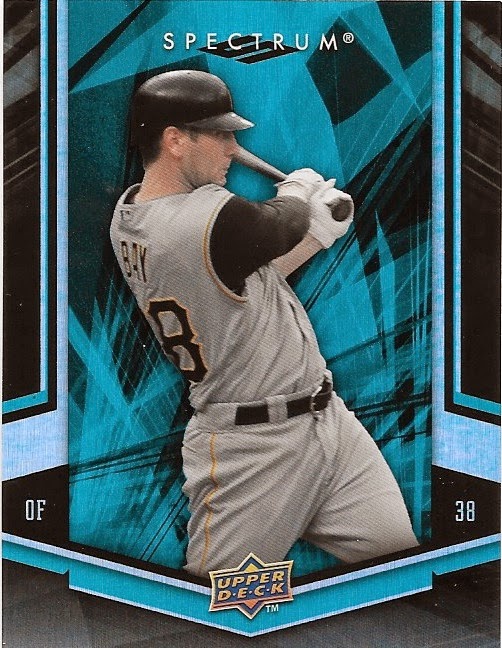 At the end of the day, it's the uniqueness and variety that make me a collector.  Not value.  Not scarcity.  This probably puts me in the minority, and it definitely puts me at odds with the direction of the hobby. 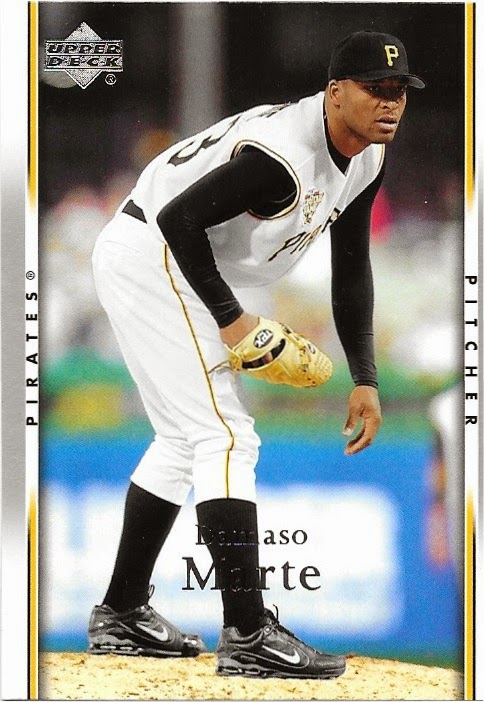 I read recently online that when folks buy into the big case breaks, they typically only have hits shipped to them.  The breakers hang onto the base cards, and then bundle them in lots online to make some more profit.  A voice inside me was screaming "But the base cards are the best part!" 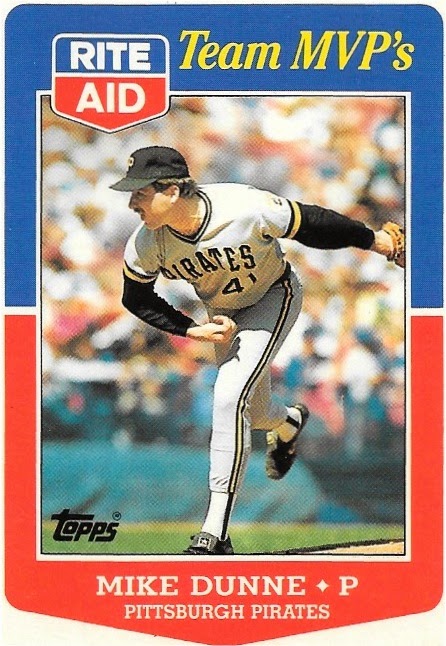 Maybe that's why I bought an entire box of base cards. 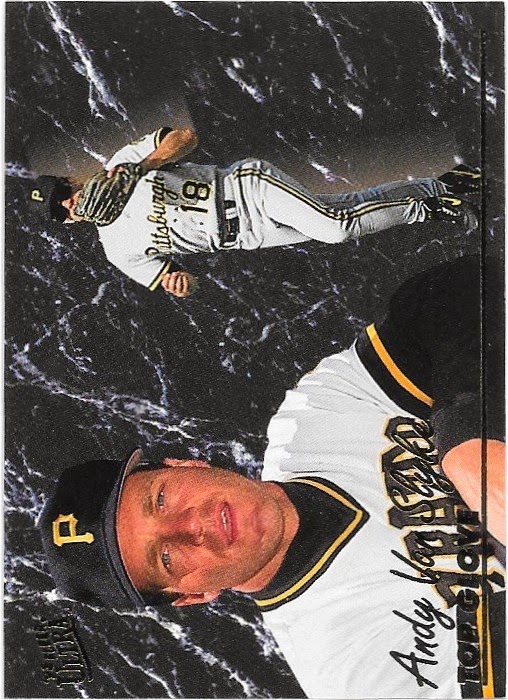 A team collector I know recently posted his Cecil Fielder collection.  He collected as a kid, before letting the collection lapse in 1996.  He decided to pick it up a few months ago, and added over 500 cards in the past few months.  It probably wasn't cheap.  But the sheer variety of cards that were and are available, to me, makes collecting fun.  It's the chase, whether in a dime box or online store.  Card show or LCS. 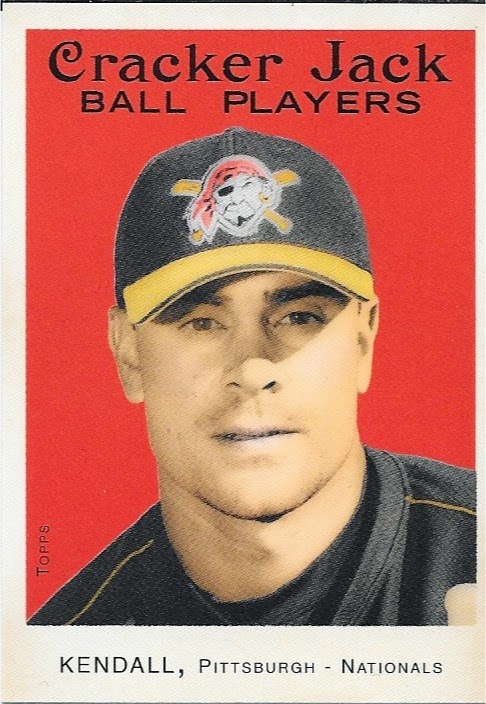 It's that cat and mouse game.  Cross one off the list, knowing there are thousands more to chase.  There's an excitement to tracking down a card you've seen on checklists a dozen times, but never held in your hands.  I busted an entire box of Cracker Jack when it came out, and didn't pull a single Pirate card.  Which happened a lot in the mid 2000's, when there were maybe 2 or 3 Pirates even in a set. 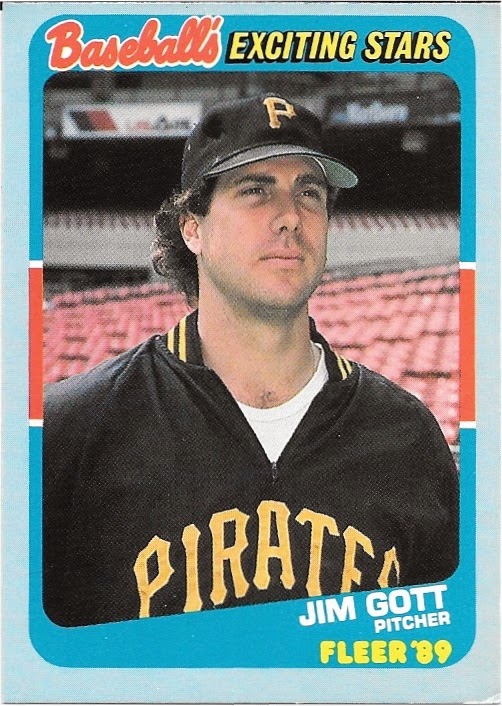 Having the chance to sort through a few thousand new additions, never really knowing whether the next card you flip to would be a brand new addition or simply another double.  It was like a gigantic pack of cards, in the days when simply pulling a card of a Pirate was enough to make the pack worth while. 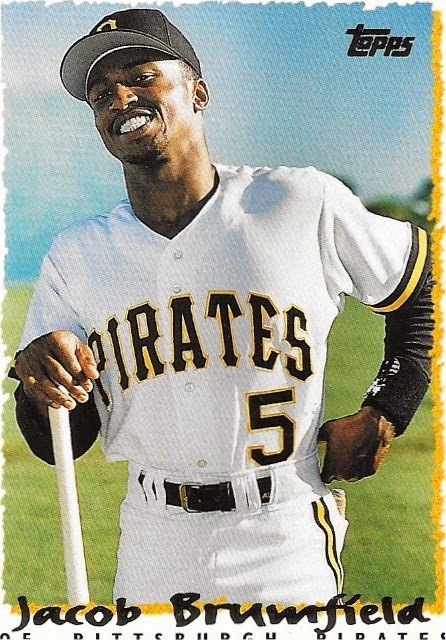 So yes, it's about more than just filling empty binder pages.  More than just finding complete team sets of 1994 Fleer Traded, or getting that last Jacob Brumfield 1995 Topps Traded card to complete the whopping 3 card team set.  It's about enjoying baseball cards in their most basic form, and all the twists and turns, quirks and oddities, that the hobby has had to offer over the last 30 years.  I may not be crazy about its current iteration.  But there are certainly plenty of reasons to be crazy about cards.  I found 404 new reasons.  And that was worth a lot more than $20.
Posted by Mark at 10:38 AM