I'm still catching up on the backlog of flea market trips.  And I'll be the first to admit that this one wasn't the most exciting of the lot.  But...bobbles!

I stopped up at the flea market up the street before leaving for Baltimore to meet up with some of my team collecting buddies.  I had hopes of finding a few extra cards to take for them, but ended up striking out pretty bad on that front.

It has been probably a month or two since I've been to the flea market to visit my buddy Ken, and he had majorly rearranged the space in the time between. 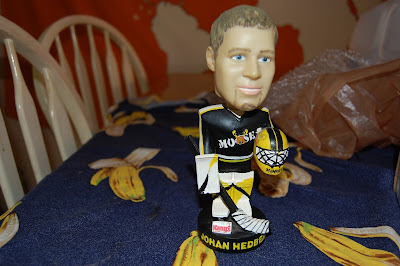 There was a large display of bobbleheads that he had apparently bought off someone.  Most were Pirates SGA's I already had, but there were a couple interesting Pens bobbleheads.

I'm not a big hockey guy, but at the right price I have been slowly adding Penguins bobbleheads for my future man cave.  The Johan Hdeberg bobble really caught my eye, since I hadn't seen it before.  Without logos, I figured it wasn't an SGA, but when I asked Ken for a price the $2 price tag was too good to pass up on.  After a little digging, I discovered it was a promo from local restaurant chain King's (an all night diner kind of place...think Denny's, but usually with worse food).  I'm assuming the bobble came during the pinnacle of Hedberg-love in Pittsburgh, which ultimately was short lived.   Goalies always confuse me as a casual hockey observer.  Some guys seem to stick around forever, while others get incredibly hot seemingly out of nowhere, and fade into obscurity just as fast. 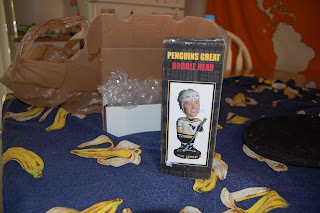 Ken also had a Mario Lemieux SGA bobble.  I seen them pretty regularly, but never want to fork out the $15-20 they're usually priced at.  But Ken always cuts me a great deal, and charged me $10 for the Lemieux, which I gladly paid.  I grabbed a couple of Pirate dime cards as well, but nothing overly exciting.

I'm not sure if this weekend will have any flea market trips in store, but regardless this summer has been a great flea market season for my collection.  Now I just need space to display everything...