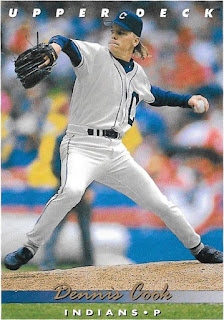 I had big plans for Friday.  Sleep in, do nothing, and enjoy a day off.  Those plans went out the window pretty fast when my mother in law sent me a text around 8:30 saying she was at a yard sale with a ton of Pirates stuff.  I called her for the address and hopped in the car.

It was only about 20 minutes away, and after all...I didn't really have anything better to be doing on my day off.  Adding a little icing on the cake, she sent me as a text as I was driving saying to just stop by her house after and she would reimburse me for whatever I found and save it as a Christmas gift, since she never has any idea what to get me.

As I pulled up to the house, she was right.  There was a lot of stuff.  Lots of SLU's and bobbleheads, some boxes of cards at the back of the driveway.  And the prices were fair.  But the guy, who was pretty friendly, was a small time dealer in the 90's who just couldn't stand parting with the stuff for much less than he paid for it. 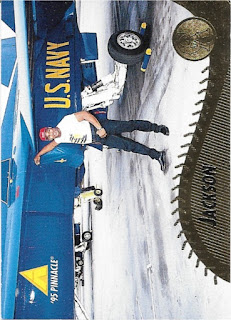 I dug through the boxes and found some nice quarter cards of 90's inserts and a few other goodies.  Nothing major, though I will have a box of 1995 Topps S2 and 1996 Pinnacle football waiting for me on Christmas, assuming my MiL doesn't misplace them in the mean time.  But those goodies will have to wait a few months before I can show them off.

But I didn't go home empty handed.  When I stopped over my in-laws to drop off my haul, my mother in law handed me a big bag full of cards that she said he had sold her for $2.  Now I'm not the biggest fan of junk wax.  And it was a safe guess this was mostly junk - almost all the cards I could see in the big comforter zip bag of cards were 1989 Topps - I figured I could at least pluck out some cards for TTM autographs. 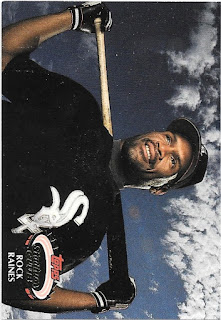 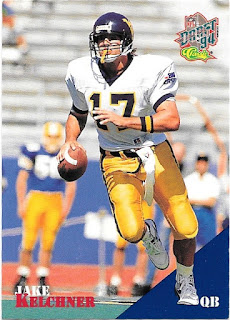 But all those cards were well worth the $2, even if it does mean I have a small box full of beat up junk wax I have no use for, but don't have the heart to throw out.  I even found a WVU card of a quarter back I had never heard of.  Apparently Kelchner transferred to WVU from Notre Dame after being blocked at QB by Rick Mirer.  And I think we can safely say 1990 was the last time the phrase "blocked by Rick Mirer" was used that wasn't in reference to seating arrangements or pickup basketball. 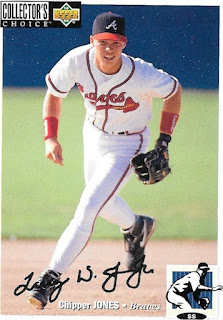 The bag 'o fun wasn't without some star power, even if all the 1989 Greg Jefferies had been picked out. 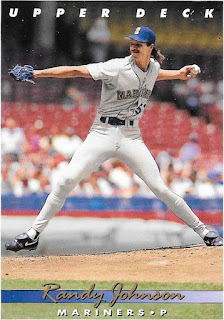 I really wish RJ had stuck with the colored glove for the rest of his career.  But alas, the greatness is captured on cardboard. 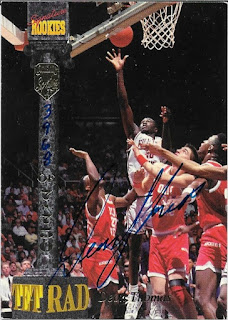 I even found an autographed card in the bag.  Apparently Deon Thomas was a college standout before being picked 28th overall in the 1994 draft, but decided to play internationally and never suited up in the NBA.  His playing career lasted until 2008, and he was one of the most decorated American players in European basketball.  Not bad. 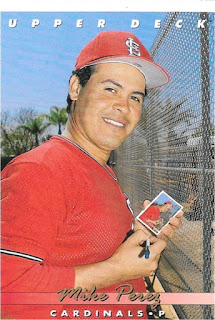 I don't need to even go into whatever kind of voodoo witchcraft greatness created this gem.  This one has been on my want list for quite a while. 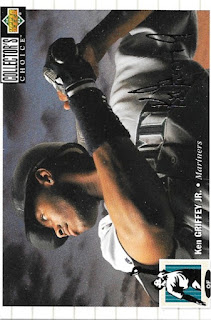 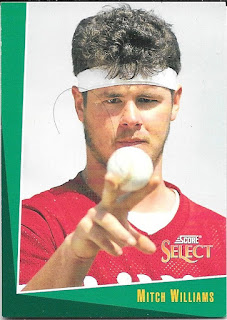 And how can you not love the striped stirrups on Fernando!  I think that may also be a throwback uni, though I'm not totally sure. 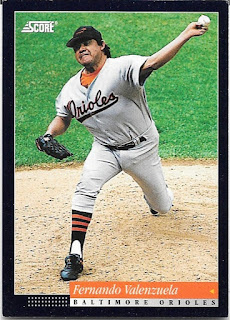 And I found a few new Marlins to add to my newfound hoarding.  Just look at all that teal!  How can you not love it? 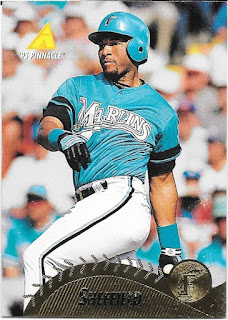 There were even a few cards from the Action Packed minor league set bringing back all kind of 3-d goodness.  Kevin Millar was the only player of note though. 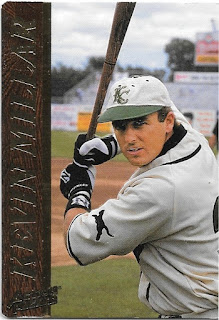 The only real down side was that I ended up spending hours sorting out the bulk of a 1989 Topps set.  I'll probably go through this coming weekend and see what cards I'm missing, if anyone has some 89T clogging up their closet.