I posted a little while back about some flea market finds I came across a couple weeks ago.  As always, getting around to posting part two took a good while longer than expected.  But hopefully it's well worth the wait.  This flea market has a good number of regular vendors.  There are probably half a dozen "sports guys" who, more or less, are impossible to deal with.  Their prices are ebay+200%, and just seem to be waiting on a sucker to come along.  I was talking with a vendor Kate bought a couple of metal street signs off of, and he said a lot of the vendors at this flea market basically try to use the flea market as their full time job.  And hey, if you can find people willing to overpay so that you only have to work two days a week, more power to ya I guess.  But for me, it just means that I walk by a lot of tables without even needing to stop and look.

So after my first couple pickups went pretty slow, I made a b-line over to Bob, a regular who always some pretty nice inventory.  His prices are a little higher than I'd like, basically in line with ebay+shipping, but he's usually willing to drop the price when I bundle a few things. 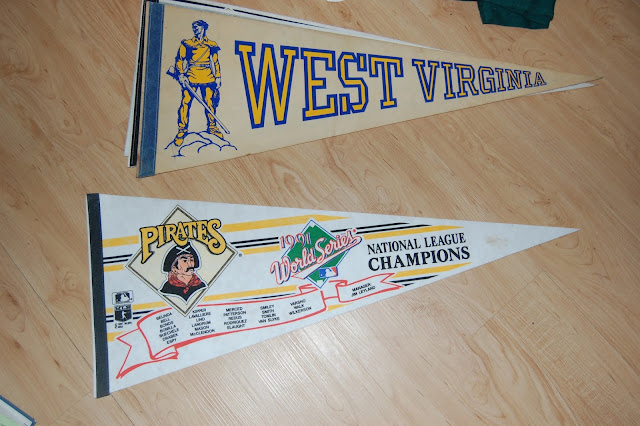 As I was going through some pennants, one immediately jumped out at me.  See that one on the bottom?  The one with the 1991 World Series logo?  In case your history is a little rusty, the Pirates didn't play in the 1991 World Series.  Or in fact any Fall Classic since 1979.

Now the story isn't really a head scratcher.  Every year various commemorative gear gets printed up for the teams that get close to the big dance in each sport.  After all, printing thousands of pieces of merchandise takes time, and then needs to be shipped all over the place.  But I'd imagine most of that stuff ends up in a landfill or shipped off to some developing country.  I've never seen this before, and absolutely had to have it.

It's funny how the world works.  A few different breaks, maybe a few swings of a piece of wood 2 or 3 inches lower over the course of a week, and these pennants could be everywhere.  Maybe some Braves World Series pennant becomes the cast off that wasn't supposed to leave the factory.  And beyond just being a cool and unique conversation piece, this pennant is a little reminder of how strange the world can be.

The $20 price tag seemed a little steep, but when I added in a vintage WVU pennant I was able to get the price to $25 for the pair. 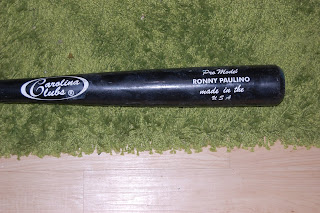 But I can never leave a good bundle go.  Bob had a Ronny Paulino game used bat that had been sitting around for quite a while.  I had debated between the Paulino and a Gary Redus gamer that I ended up buying months and months ago. 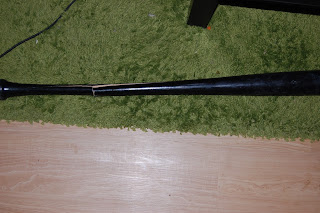 I figured it was time to do a little price check.  And as luck would have it, the bat that had been $35 was now $30.  With a little haggling and packaged in with the pennants, I got the bat for an additional $20.  I actually had to call in reinforcements to have Kate bring me a little more cash, which ended up with me getting the "what are you doing now?" look as she unquestioningly handed me more cash.

I can't be more appreciative of how easy going she is about my collecting habits.  Even though we have very, very different collecting tastes and she really has zero interest in sports memorabilia, I couldn't ask for someone more supportive of my addiction  collection. 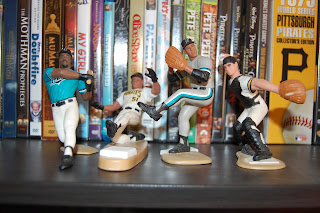 But I wasn't done yet.

I snagged a few SLU's for a dollar each.  The late 90's Pirate Starting Lineups are tough to find.  They were short packed, since...Pirates.  And I have a soft spot for the 90's Marlins that I'll be discussing in an upcoming post.  It's the teal that does it.