There's nothing wrong with the occasional impulse purchase, right? 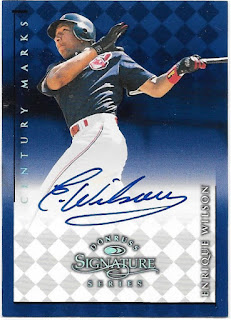 I sure hope not, because when it comes to cards I'm a sucker.  I can resist eating out for weeks at a time.  Squeeze that last drop out of the toothpaste tube.  Make a meal from those random food items that always get pushed to the back of the pantry like I'm a contestant on Chopped.

But all that self restraint and thriftiness goes out the window when I see a shiny baseball card.

I'm a sucker for the 1998 Donruss Signature set.  It is, in my eyes, the greatest looking autographed set ever made.  And the crown jewel is the Century parallel /100.  The dark royal blue just makes the cards pop in a way I love.  Except that they're an autographed 90's insert /100.

The opposite of thriftiness.  I have a couple Pirates, and a couple more unnumbered replacement cards that came onto the market in the Donruss bankruptcy sale.  But when a few true, numbered, copies were listed last week I knew I had to at least take a crack.

Most I ended up handily outbid on.  But I was able to snag one.  For the tune of about $2.  Wilson even has a vague Pirates connection, spending some unmemorable time with the Bucs, which was a far fall from the Indians powerhouse teams he had been on previously.

Did I mention I landed an autographed rare 90's insert for $2?  Yep, no complaints over my impulse buys here.