I've been sparse around these parts lately.  Call it the post-break lull.  I ripped a few boxes over Christmas, and the experience is always enough to make me swear off wax for a while.  Perhaps just as importantly, the mountain of cardboard that piles up makes me want to take a break from cards.

But that's not all bad.  We've made a few recent trips to thrift stores in the area that have yielded some real gems.  What can I say?  It doesn't take much to amuse me. 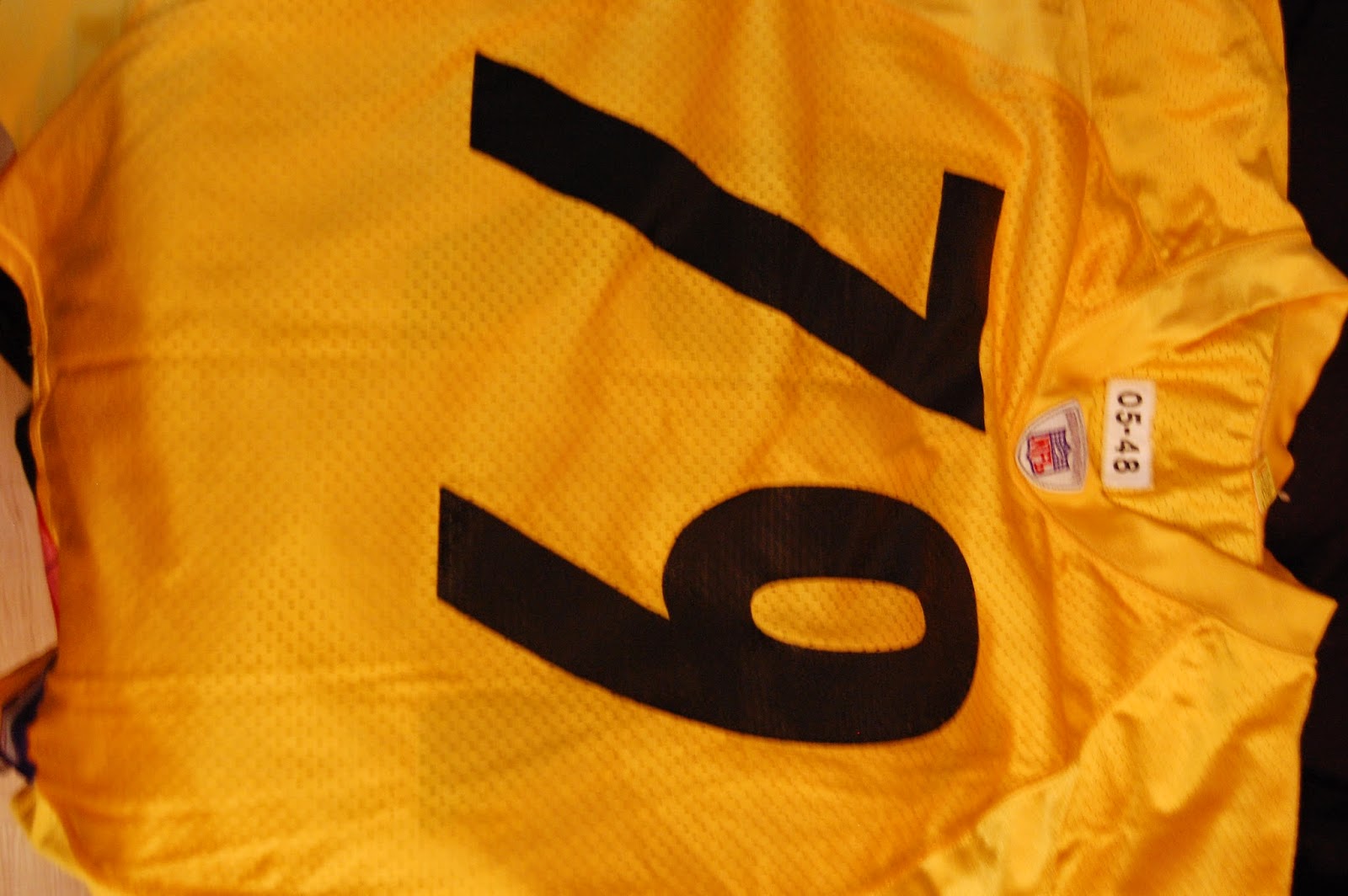 A couple weeks ago Kate took some clothes to one of those hipster-y clothing retail places in the city.  She had a box of clothes she was going to get rid of, and it's always worth checking to see if they'll take anything before donating the rest to Goodwill.  The prices aren't great, and it's 80% women's clothes.  But I have found a few cool finds, like an Andrew McCutchen rookie jersey, and a couple mid 90's Pirates pullovers.  But while I was waiting on her, nothing caught my eye.

And then I kept waiting.  And waiting.  With nothing to do except flip through the same two racks of mens clothing.  And somewhere along the line, after flipping past a dozen high school band jackets and some Steelers sweatshirts for $15 that I had bought at a flea market for $3, I noticed a jersey that stood out.  A gold Steelers jersey?  I don't remember seeing gold jerseys at retail those are usually only at...training camp. 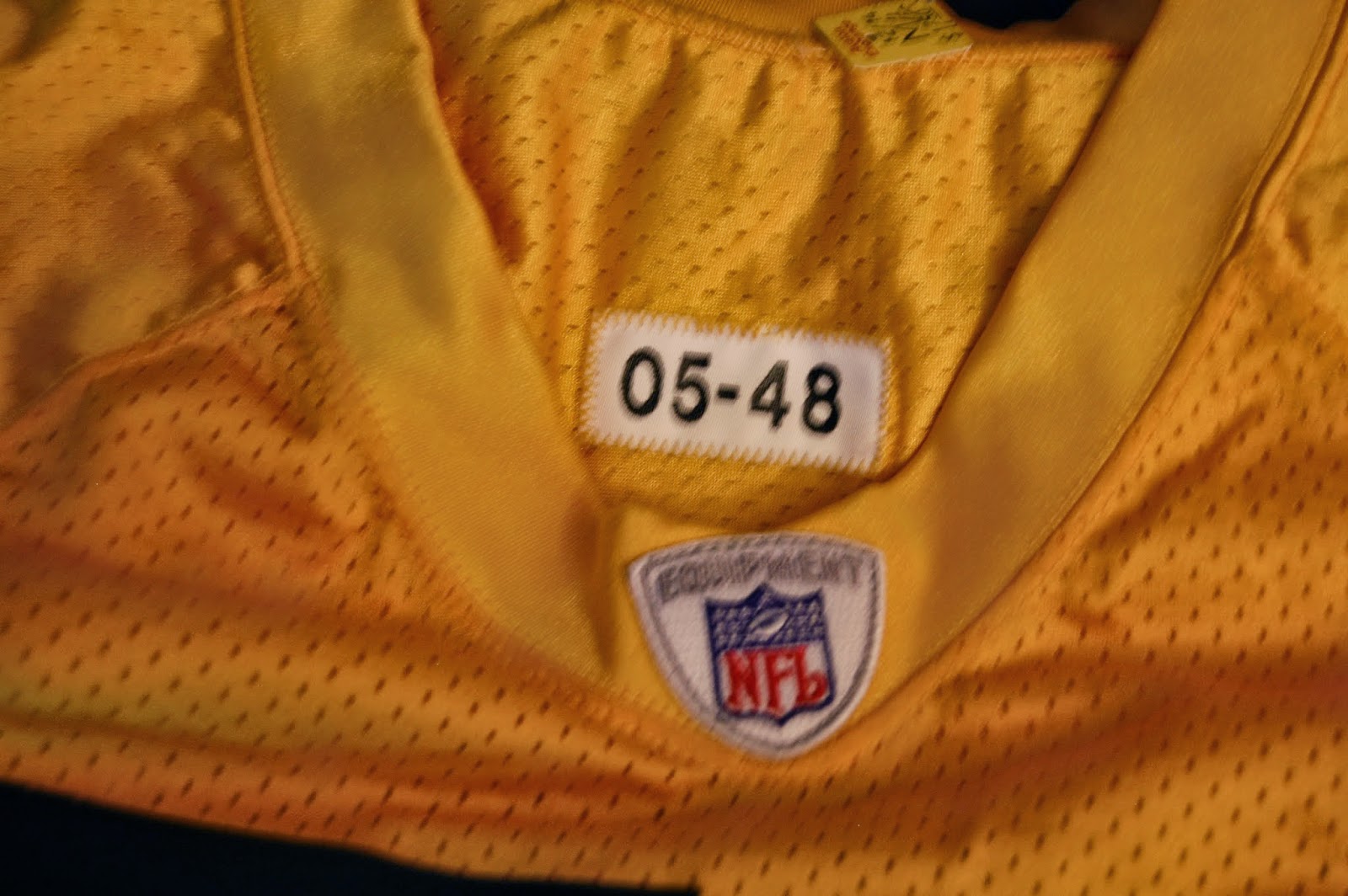 I pulled the jersey off the rack and took a closer look.  Stitched year and size tag?  NFL wash tags?  Hmm.  I don't know much about NFL jerseys, but the cut and tagging made me think I might just have a training camp jersey on my hands.

Better yet?  They offered us $40 store credit for the clothes (which were otherwise headed to Goodwill anyway).  The Steelers jersey was marked at only $15, but was free with the store credit.  And you can't beat free.

I started doing a little digging when I got home.  A little digging turned into a lot of digging.  After 2 hours of combing newspaper archives, I finally found the training camp roster for 2005.  And that's where I hit a dead end - number 79 was issues to Trai Essex, an offensive lineman.  The gold jerseys in camp are worn by the defense, and the size 48 would probably fit either a defensive back.  So I can't say with any real certainty if it saw use, or who it belonged to.  But still, I picked up my first football team-issued jersey.  For free.  From their Super Bowl season.  I'm a bit thrifty after all. 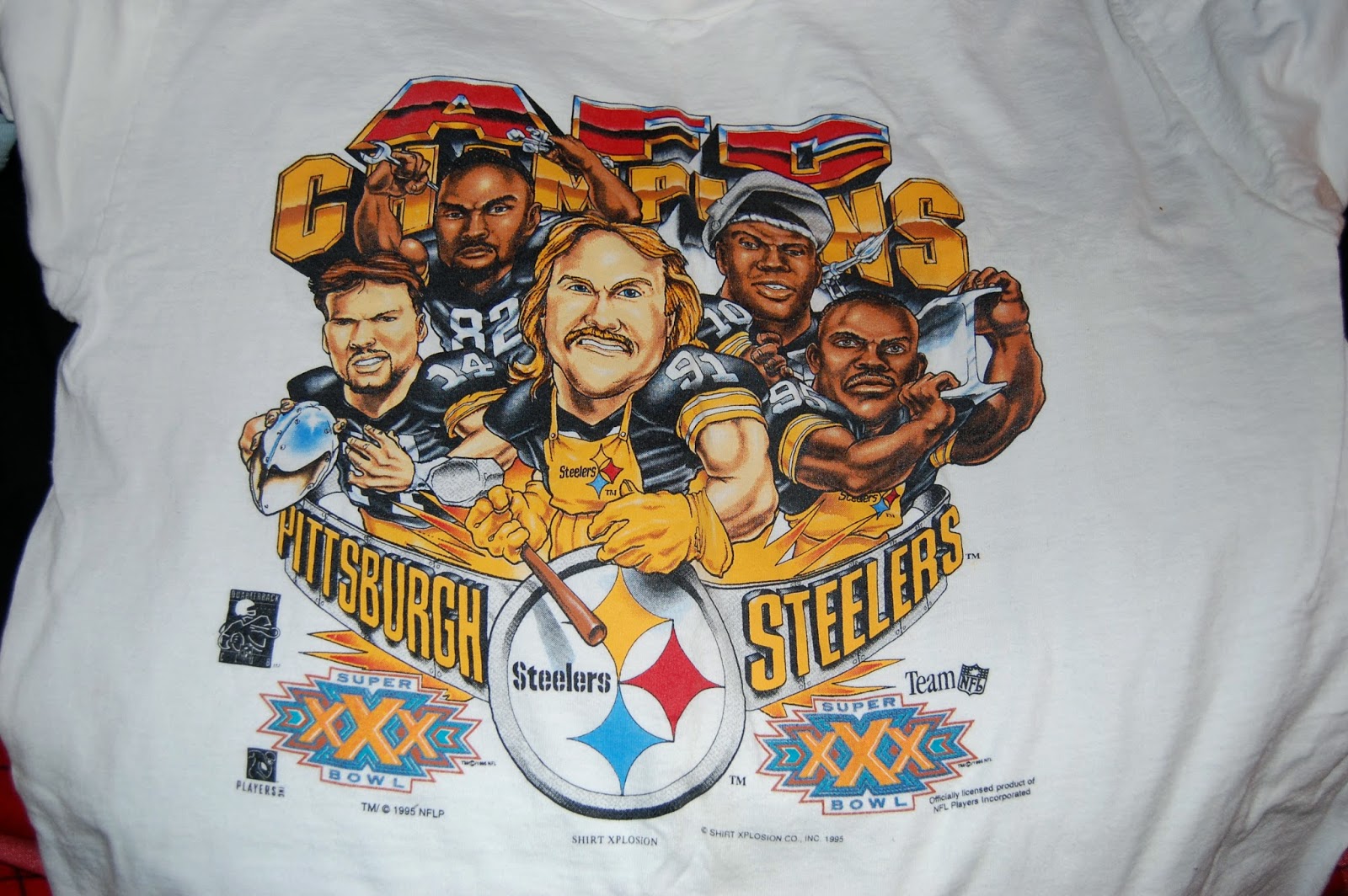 And while I don't know that any find will top that for me, I picked up some cool stuff in recent weeks.  This Steelers Super Bowl tshirt came from a Goodwill outlet center that sells everything by the pound.  We left shortly after spotting this tshirt (because people were getting into a fistfight when a new bin of shoes was put out) with this tshirt and a couple 3 inch binders that cost me a grand total of $1.40.  I'm a big fan of the cartoony 90's team tshirts.  This image alone should make Kevin Greene worthy of the Hall of Fame. 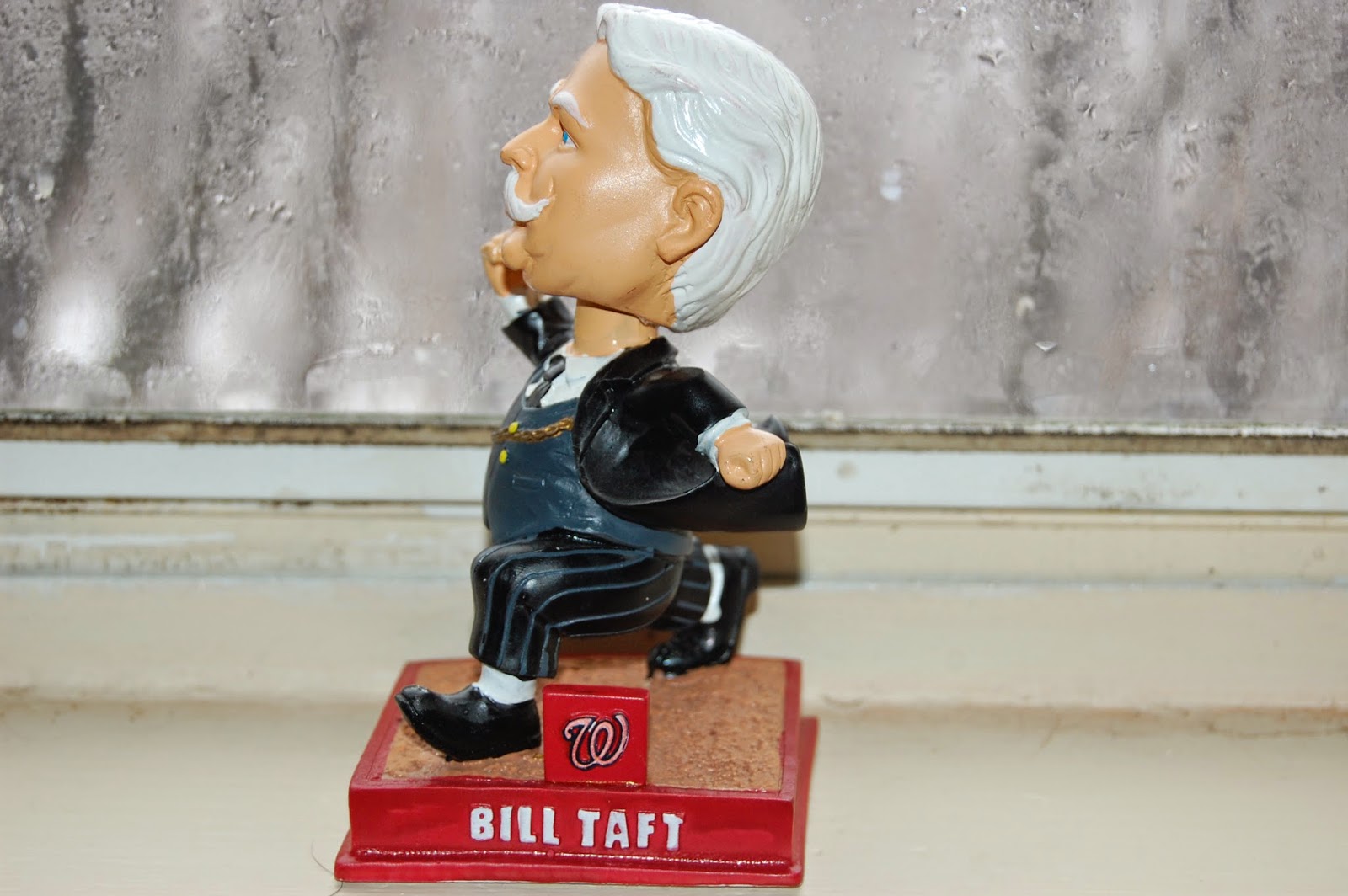 And last but not least, the oddest bobblehead in my collection.  Kate spotted this one at a local thrift store because it looked like the Monopoly man.  But without the Nats logo, I never would have assumed a William Howard Taft bobblehead would have any connection to baseball.  I've been a big fan of the Nationals' racing presidents, but had no idea they had expanded the lineup in 2013 to include Big Bill Taft.  Let's say he's a little out of his league with his presidential competition. 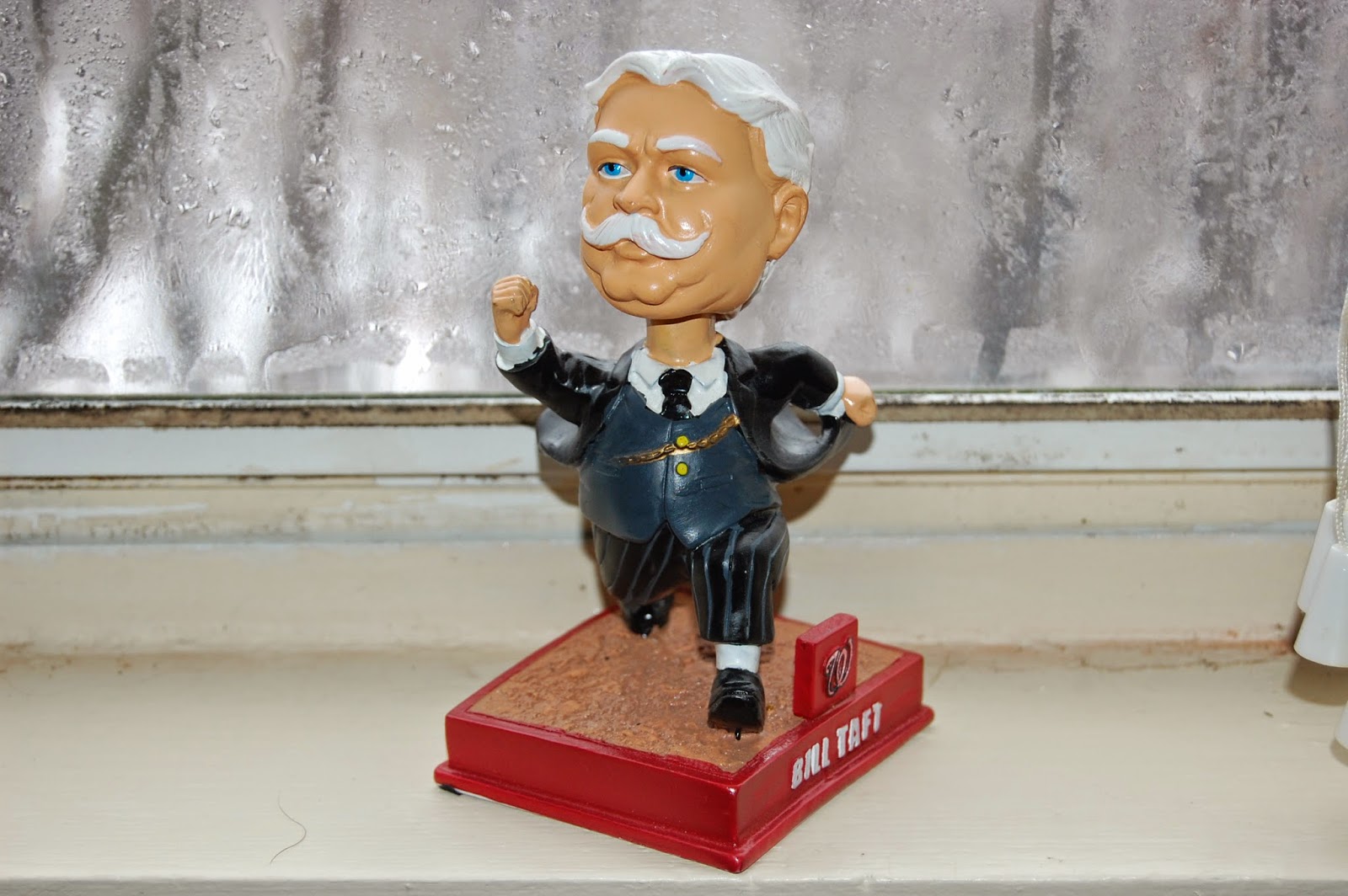 I've tried to scale back on the impulse bobble purchases, but for $1.99...  Better yet, doing a little digging when I got home revealed this was a stadium giveaway during a Pirate/Nats game.  So thanks for the intrepid adventuring Pirates fan who was kind enough to drive to DC for a baseball game and not even keep their souvenir.

I'll hopefully be back to posting regularly and showing off some of the new cards that came in over the end of the year.  But until then, Bill Taft says keep on runnin'.