I Can See Clearly Now

I'm still a little conflicted over how to feel about last year's Topps Tek release.  On one hand, the product offered some great 90's nostalgia and probably one of the better products of the year.  On the other hand, little about the set held true to the original sets, and the Pirates were largely overlooked in the set.

The only Pirate in the base and autographed sets was Gregory Polanco, who commanded decent prices as a highly touted rookie.  While I have a few of his cards, I haven't made nearly the progress I'd have hoped for. 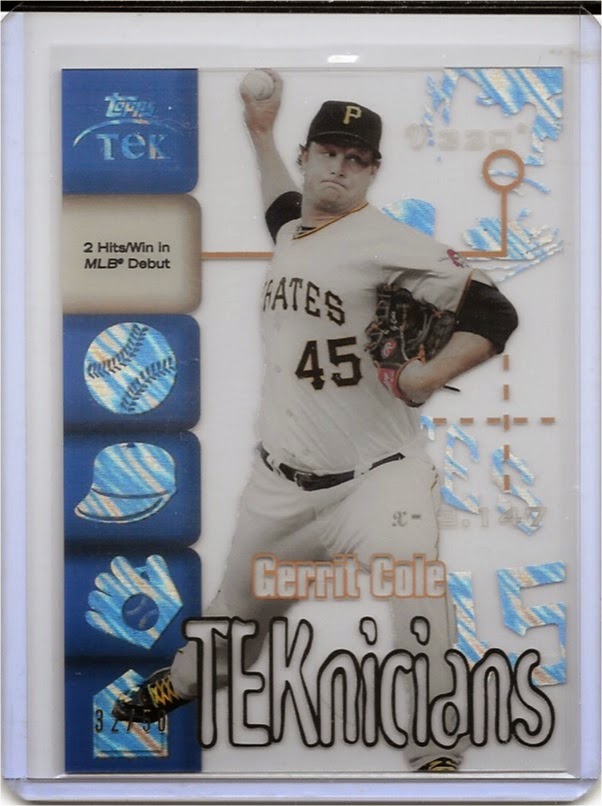 And the same can be said for the pair of Pirates inserts.  I got outbid on a few of these TEKnicians inserts near release, and then sort of forgot about them.  I was able to snag this Gerrit Cole with the lone bid, since I'm sure other collectors have moved on to newer and shinier sets.  It's a great looking card, and scans well.  But I'm still a little irked Topps calls it a Diffractor, since it actually just has some sparkly rainbow pattern applied, rather than the process applied to actually 1998 Diffractors, which I'm assuming they couldn't figure out how to replicate.
Posted by Mark at 4:11 PM

Email ThisBlogThis!Share to TwitterShare to FacebookShare to Pinterest
Labels: Gerrit Cole, I love the 90's