I made a stop yesterday morning at the flea market up the road.  I've had a card on hold since the week before Easter, and I've been itching to pick it up since, but last week just about all the vendors were MIA when we got there around 10:30.

But here is it - my big impulse buy.  Or at least big for me.  The Pens are about 4th on my team collection depth chart behind the Pirates, Steelers, and WVU.  I keep trying to develop an interest in the game, but honestly pretty much just watch during the playoffs. 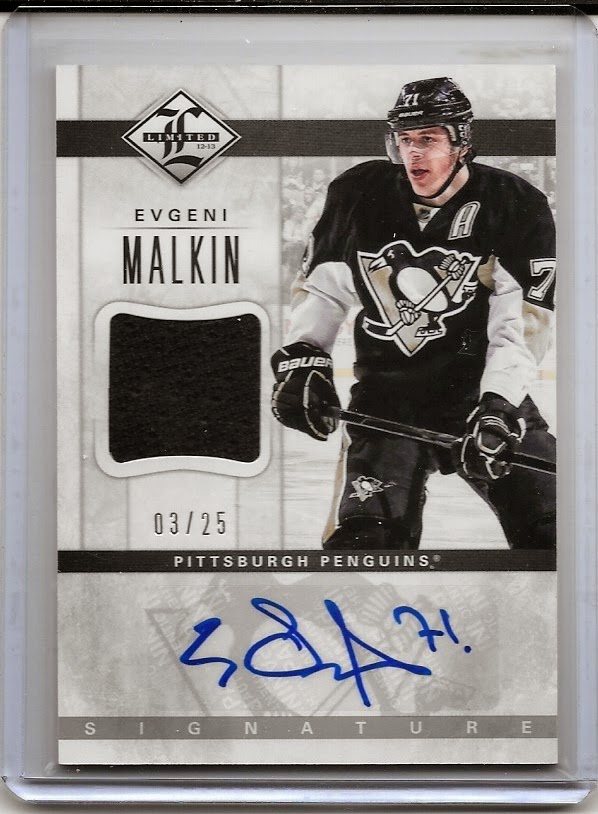 Still, I've been trying to pick up some nicer Pens cards for my collection.  When I was going through the stack of Pens/Steelers/Pirates autos the vendor had a few weeks back, I figured the Malkin would be out of my price range.  After all - hometown markup, superstar player, flea market, hometown markup.  Did I mention hometown markup?

But there's a reason I keep going back.  When I asked Ken for a price just out of curiosity, he said $15.  I'm a cheapskate, and I know it.  The stack of cards I paid $15 or more for in my collection would be a very small one, and just about every one would involve the words Jack and Wilson.  But the price seemed more than fair.  A recent copy of this card went for $26 on ebay, and even if Malkin cards aren't as hot as they once were it's a great addition to my (growing) Pens collection.

I'm thrilled to finally have this beauty in hand, along with some other cards I grabbed yesterday that I'll show off later in the week.  Better yet, the Pens were finally able to get some offense going and win a game last night.  It's still an uphill battle to keep advancing in these playoffs, but it should be entertaining to watch.
Posted by Mark at 9:56 AM

Email ThisBlogThis!Share to TwitterShare to FacebookShare to Pinterest
Labels: Penguins