It was 90's Day at the Flea Market 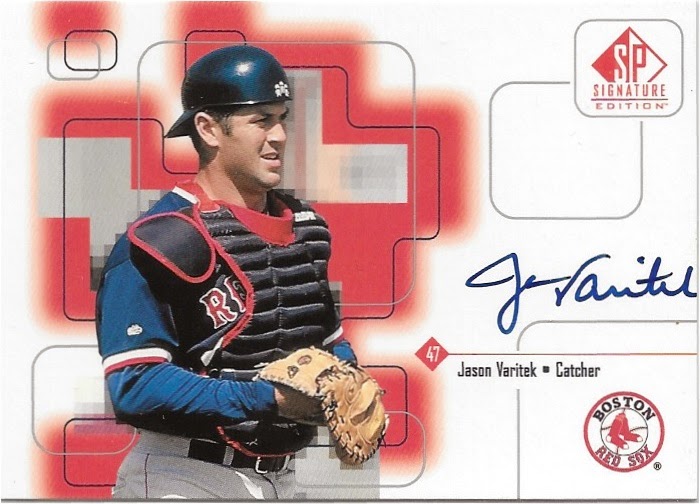 I'm going to set aside the set of Deep Hobby Thoughts that have made up the last few blog posts, and just kick back and enjoy some cardboard.

Before the oft-mentioned Show of Doom, Kate and I stopped at our favorite flea market.  It was along the way to my parent's, and the flea market and mall are only about 4 miles apart.  It should have been the perfect pairing of cardboard.

One of the permanent vendors inside the flea market always has freshly stocked dime boxes of Pens, Pirates, and Steelers, and it usually isn't tough for me to walk out with 150 new cards or so.

I was trying to make the flea market trip a quick one, since I still wanted to drag Kate to the card show and get over my parents by early afternoon.

And it looked like it would be mission accomplished.  I only found about 30 dime cards worth picking up, which may be an all-time low for me.  The owner even made a joke about it, since I'm probably one of his better dime box customers.

I called Kate, and she said she still wanted a few more minutes, since she was looking at some clothes in another part of the flea market.  I wandered over to the other card stand down a different hallway.  I occasionally buy from the guy, but usually he doesn't have much that interests me.  If I had to put him in a category, I would have labeled him more towards the out of price "old school" dealers.  The $10-25 Starting Lineup figures lining the walls of his area would seem to reinforce that.
I started flipping through some boxes labeled $.50.  There were some decent cards, and a lot of star base cards.  Decent, but nothing I was willing to pay $.50 for.

After a couple minutes, he said, "Hey buddy, everything in that $.50 box is $.25."  Now, a sign indicating that would have been grand. 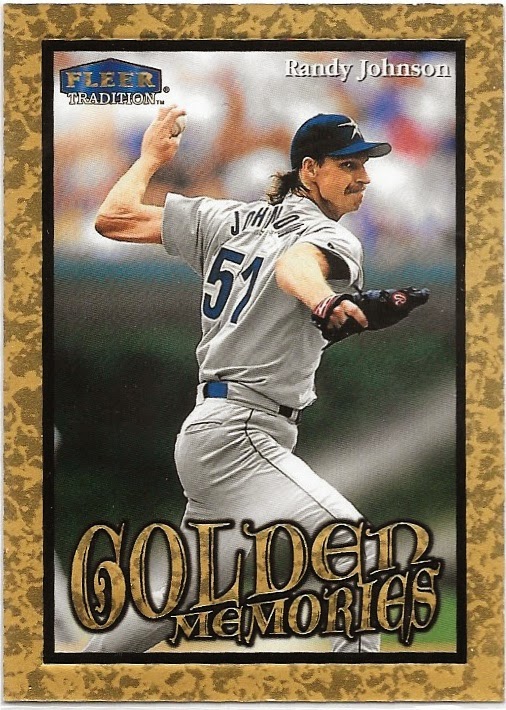 Maybe it was one of those special "for me only, because I'm flipping through the box, haven't actually picked any cards out, and he hasn't sold anything all day" sales.  Either way, for half the price, some of the cards were worth bringing home. 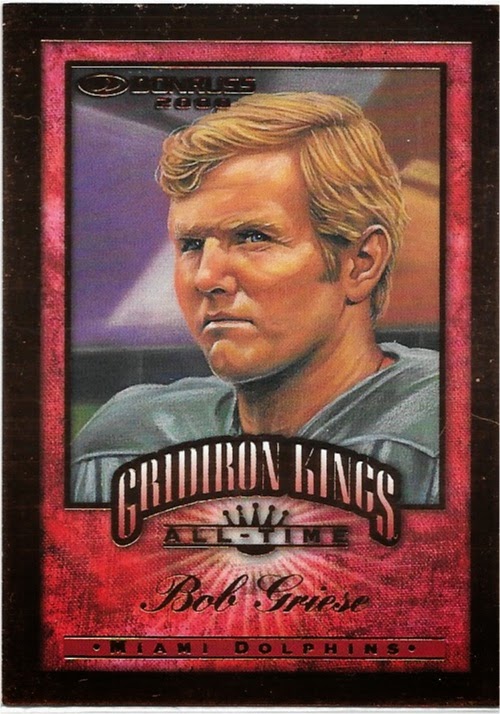 The dealer said he had another box of quarter cards behind the counter, if I wanted to look through them. 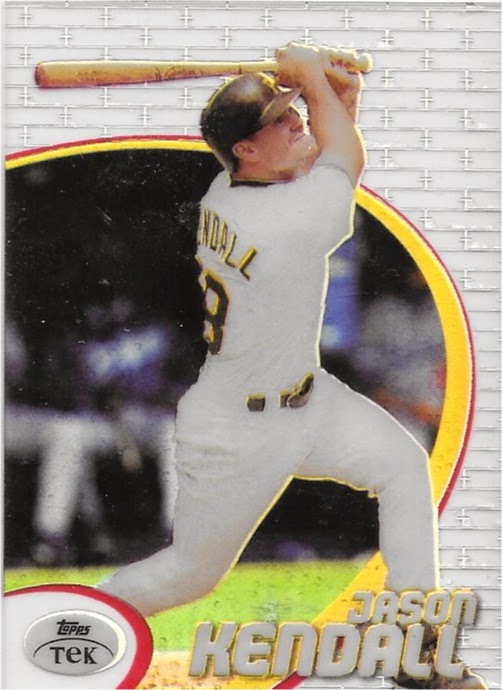 And nothing beats looking through a fresh box.  Who knows how long the box sitting at the front of the store had been there.  I found some nice cards, but I'm sure there had been some gems already plucked. 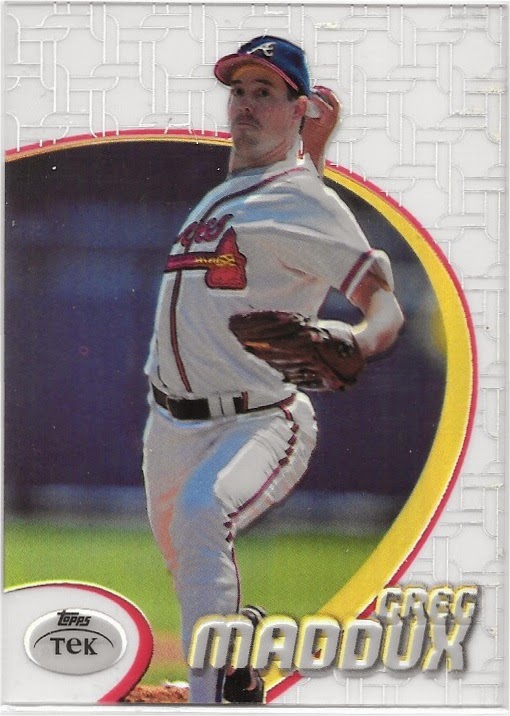 The chance to dive into a box that was more or less untouched?  Who knows what kind of gems it might contain. 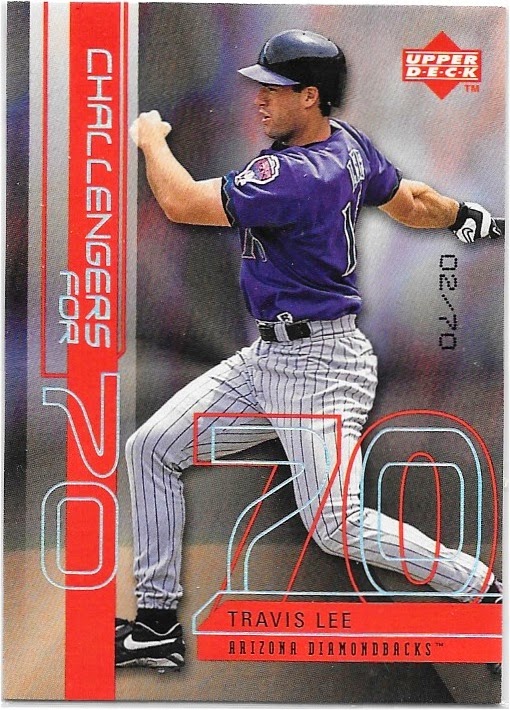 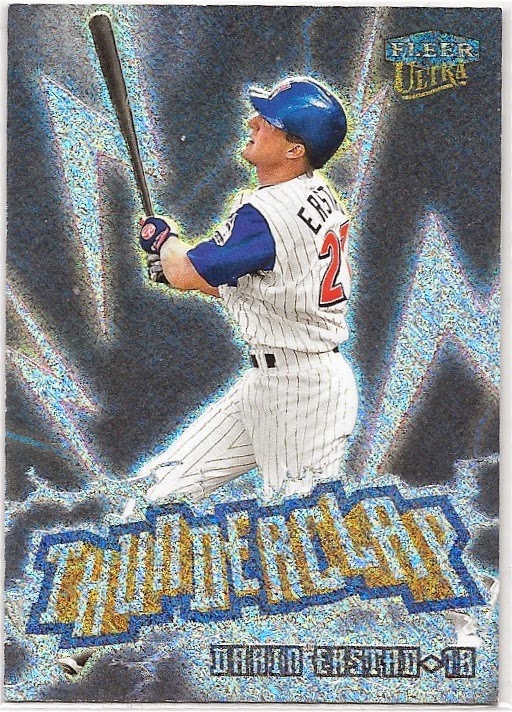 There was what looked to be an entire box worth of stat base and inserts from 1999 Ultra, including this insanely 90's Thunderclap insert. 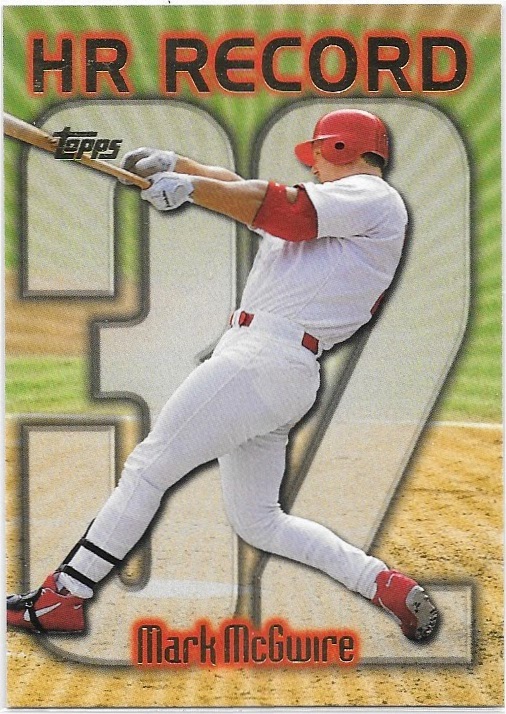 I remember these McGwire HR cards booking at like $20 at one point. 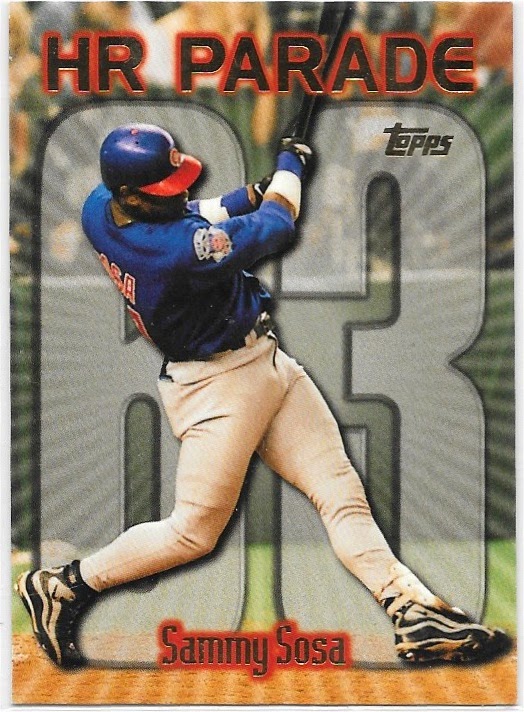 These were the first copies I had seen in person, and gladly added them to my pile for $.25.  Crazily enough, I found another half dozen or so from the set the next day at the flea market up the street. 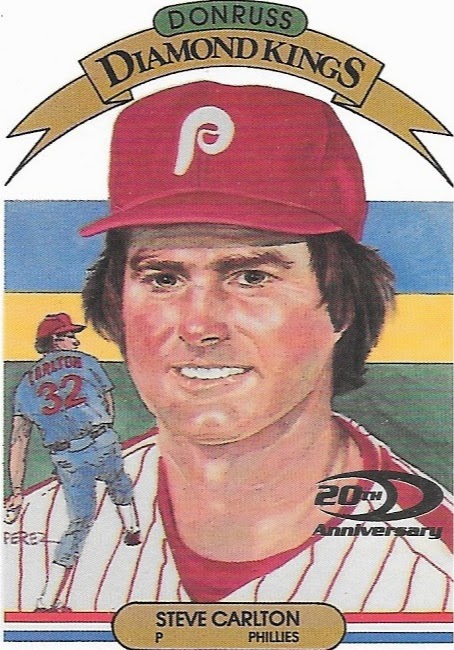 I came across a couple cards I need for my 2001 Donruss master set, which has been coming along even slower than I had hoped. 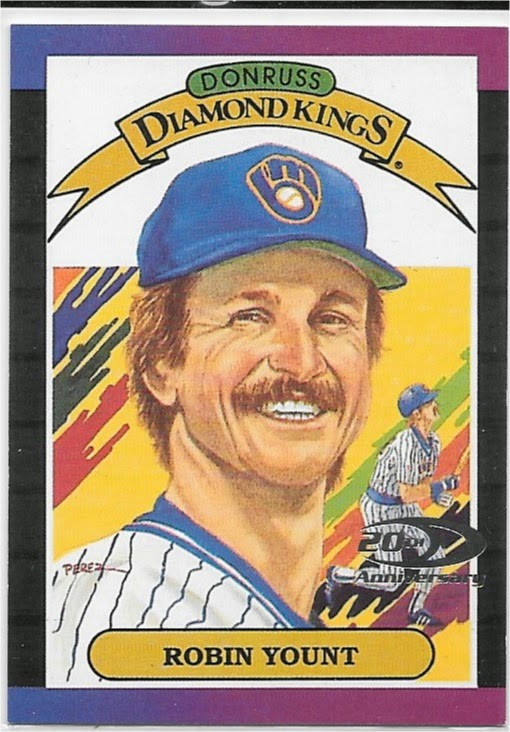 Other cards I just picked up because they looked cool. I have absolutely no emotional attachment to Alex Smith.  But the red on red with the xfractor design?  This is one sweeet card. 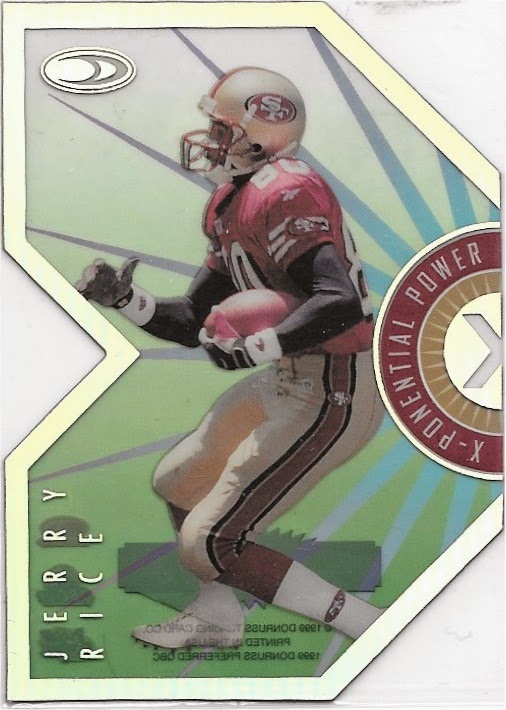 Seeing he clearly had a hooked customer, the dealer was smart enough to come out all guns blazing.  When I said I was into 90's inserts, he pulled out a binder from behind the counter.

He said he wanted to sell these as a set.  I glanced up from the $.25 box to see that staring at me was a set of 1991 Fleer inserts.  I did my best not to laugh, and kindly explained to him I like to stick to later 90's stuff. 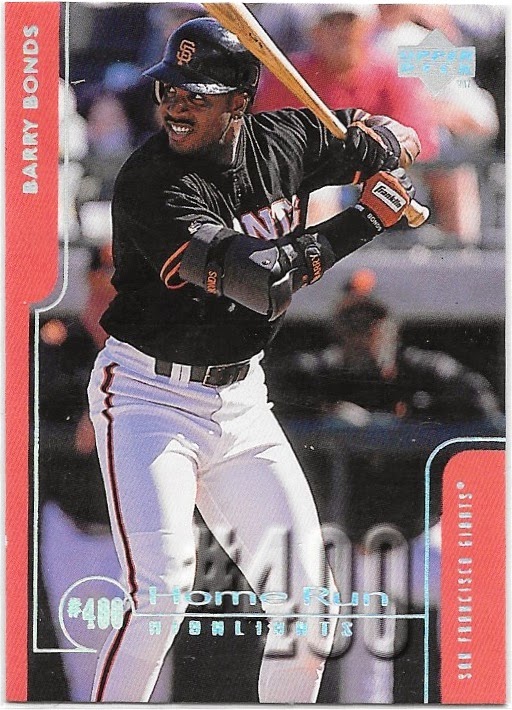 As I was ending the second box, he said he had some $1 autographs, if I'd like to look through those as well.  Bring. it. on. 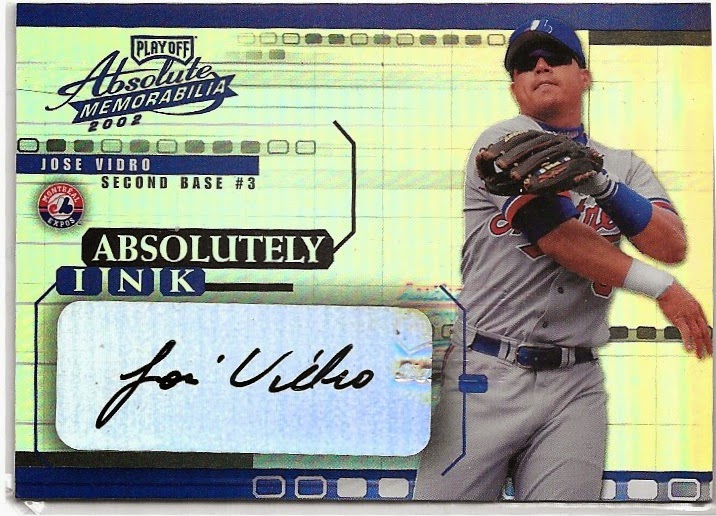 The auto box blew the quarters out of the water.  I love the Absolutely Ink set.  The cards look great, the stickers aren't overly noticeable, and the set has a great autograph checklist.  Jose Vidro never got the love he deserved playing in Montreal and behind the shadow of Vlad Guerrero. 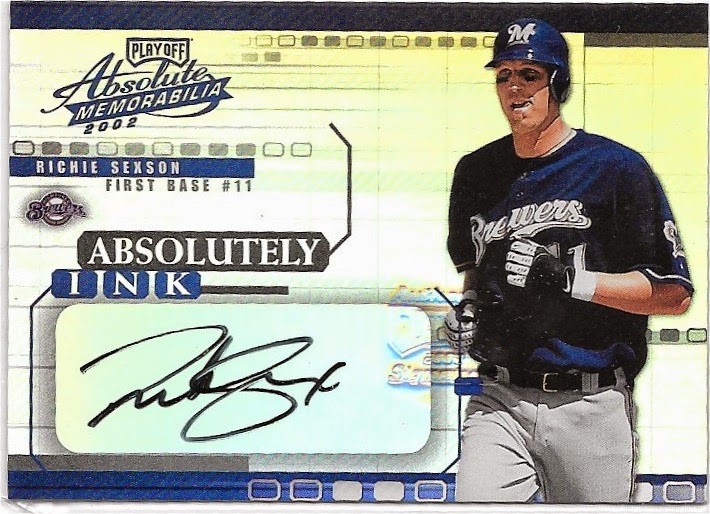 And there was a time where Richie Sexson looked more likely to be in the 500 HR club than a $1 auto box.  He was never a perfectly balanced player, but the dude does have 300 career homers. 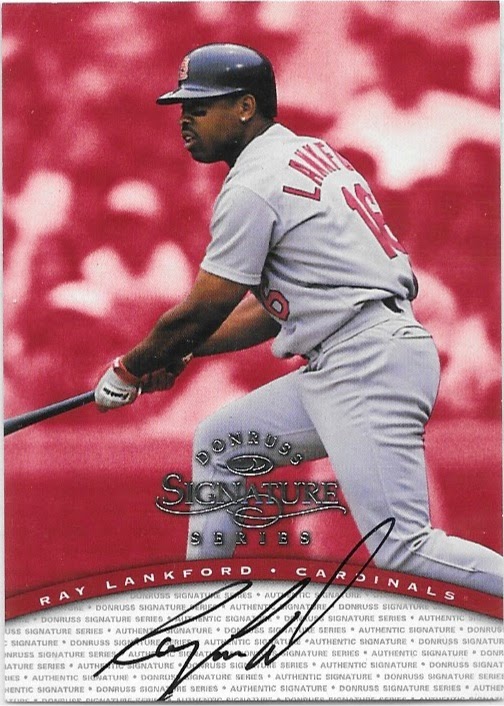 Ray Lankford has been near the top of my autograph want list for quite some time.  He doesn't have many certified autos out there.  I have been working on getting an autograph for every player whose Starting Lineup figure I had as a kid, and Lankford was one of my favorites.  For $1, this was an absolute steal. 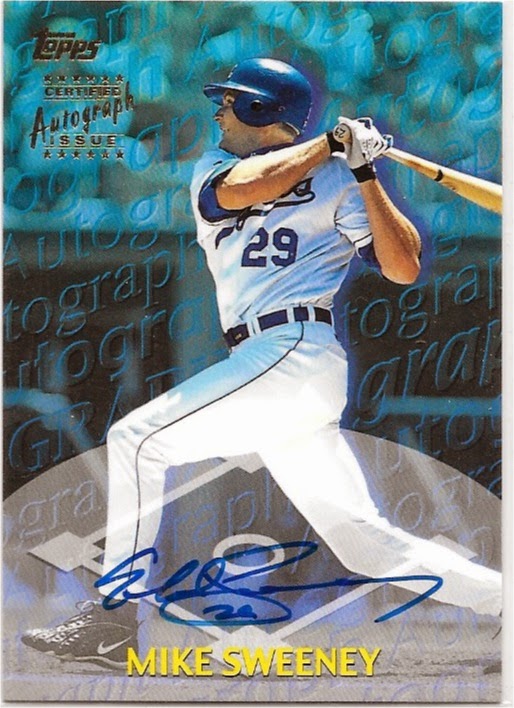 2000 Topps was, and still is, my favorite set for a bunch of sentimental reasons.  This is actually my first autograph from the main set, though I do have a few of the junk rookie autos from the Traded set, 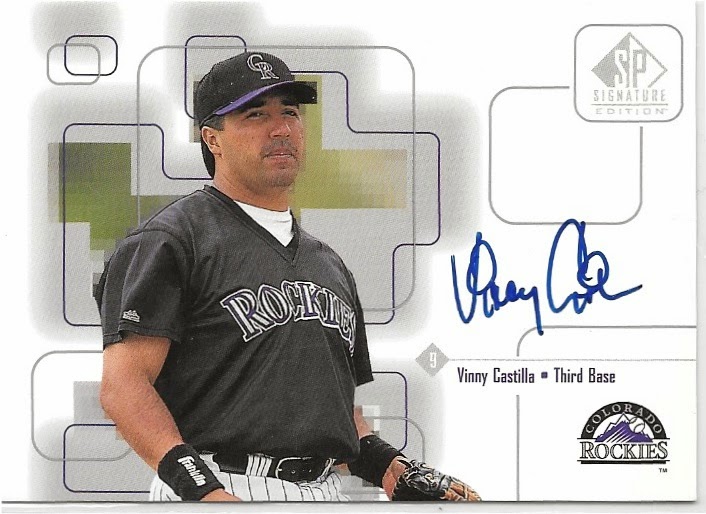 But the best cards were at the end of the box.  Maybe it was just the Coors effect, but boy was it fun to watch the 90's Rockies blast homers.  I picked up an IP auto of Castilla at the National for $2.  I usually try not to have doubles of autographs from non team collection guys, but this was one that was worth having a double of.

And I was even more shocked when I saw the Varitek auto at the top of the post.  I knew he doesn't have many certified autographs, so it seemed like a nice addition to the collection.  I was even more shocked when I got home and saw that the only copy I could find for sale online had sold for $35.  Not that it will be leaving my collection any time soon.

The grand total?  $15.  So having these great cards to add to my collection more than made up for the lame card show that would follow ten minutes later.

The weather is starting to warm up around here, but it seems like the cold days have been falling on the weekends.  Hopefully after Easter the weather will stay on the nice side and the outdoor flea market vendors will be out in full force.

If my winter flea market pickups are any indication, I think I'm in for some great finds this year.  With flea markets like this, who needs card shows?

Email ThisBlogThis!Share to TwitterShare to FacebookShare to Pinterest
Labels: autographs, flea market, I love the 90's