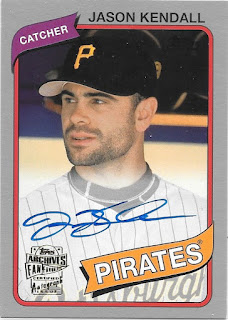 As summer kicks into full swing, I've realized I've become terribly out of touch with the world of cardboard.  Prizm and Stadium Club, two of my favorite products, went live and I was blissfully unaware.  It will probably be a while before I start to tackle the cards from either of those sets, but I did spend some time checking ebay to see what I missed.

And boy was I excited to see the Pirates in Archives this year.  Sid Bream and Kent Tekulve are two of the easier Pirates alumni to get autographs from, even if they don't have a ton of certified issues.  But I was downright giddy to see Jason Kendall in the autograph checklist.

I've soured on Kendall a lot over the years.  He was a fantastic player during some of the darkest years in team history.  But from a purely personal standpoint, Kendall was a jerk to just about everybody he encountered in Pittsburgh from fans to teammates.

Still...nostalgia and all that jazz.  I usually hesitate to pony up for Archives autos, since they often sell for more than similar products, and Kendall does have quite a few autographs from his playing days.  Still, I decided to pull the trigger when I was able to land this silver parallel for $7.  That's actually less than most of the base autographs are selling for, and I like the colored border.  So while I'm not exactly back into the swing of things, I'm getting there.  I have a COMC shipment from the Spring Cleaning promo the past week that is scheduled to be delivered today, so maybe that will get me back into a more regular posting routine.

Hope everyone has a great holiday weekend!

Email ThisBlogThis!Share to TwitterShare to FacebookShare to Pinterest
Labels: I love the 90's, Jason Kendall