No Number, No Cry

Unissued cards aren't exactly anything new.  For as long as companies have been producing cards, I'd bet that things have been slipping out the back door or getting sold off when the company folds.  But over the last few years, there have been quite a few cards popping up on ebay that are virtually identical to the pack issued counterparts, but missing the serial number.  Test sheets, replacements, and whenever else comes off of the printer.

I know some have mixed feelings on these cards.  After all, if they weren't pack issued, I can see why some people would consider them unofficial.  But to me, if the card came out as part of the original print run, it's all the same to me. 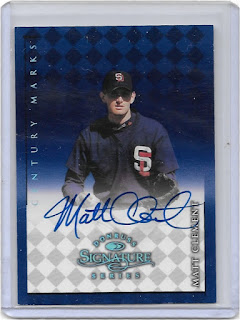 And also a great way to save a pretty penny for my collection. 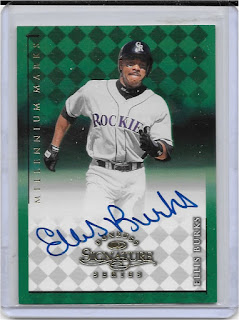 One of my new projects has been picking up 1998 Donruss Signature autographs whenever I can.  Most of the base red autos are pretty cheap.  The green autos are limited to 1000 copies, and lesser players can be had for a buck or two.  But the rarest are the blue autographs, at just 100 copies. 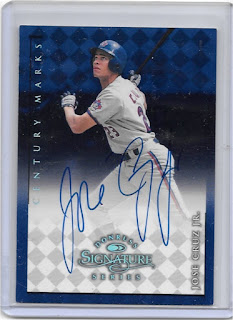 But I've found some sellers who have unnumbered versions of some of the autographs in the set available.  Sure, they aren't pack issued.  But if I can pay a couple dollars, versus $10 or $20 for the numbered version....sign me up.  After all, these blue autos just look amazing in my eyes.  And to be able to add a few players from the checklist, even if they aren't quite big name stars, makes me a happy collector.
Posted by Mark at 11:03 AM