I've been waiting to post these for about a week.  Over this past weekend, Kate and I drove down to Baltimore for the annual Team Collectors Convention.  No, it's not quite the National.  But the group of team collectors I'm a part of try to have a get together each summer for anyone who can make it.  And at a little over four hours away, it wasn't too far of a drive for us to go check out a city that neither Kate or I had been to since our middle school days.

Better yet, it meant a chance to clean out boxes and dump a bunch of cards on their respective team collectors.  But I wanted to go a little farther.  After all, my customs have opened up a lot of new possibilities when it comes to card giving. 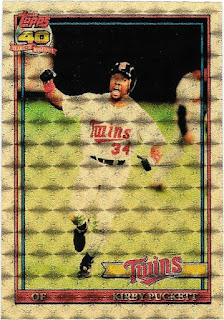 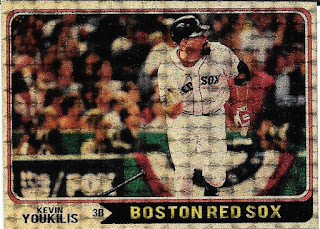 I held off on posting these cards until after the convention in case any of my team collector buddies read the blog.  It was fun making these customs, and experimenting with what designs and color combinations would look best with the Superfractor paper. 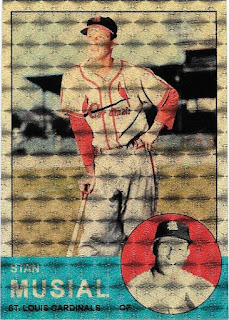 As I mentioned in my last post, I tried a whiteout technique to make the image stand out that totally backfired.  And with all the packing, card pulling, and planning that needed done for the trip I decided to just go with a more basic look for the cards.  Still, I think they came out pretty well and I hope everybody enjoyed them.  Our Red Sox collector, who has a big Youk collection, even asked what set the card was from, and said he hadn't seen it before.  Then it hit him that it was a custom. 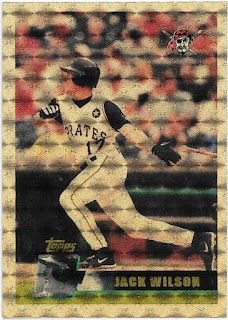 It was fun to put together a unique gift for my collecting buddies.  But let's be honest - the real reason I do these customs is to entertain myself.  And what fun would it be if I only used my newfound custom powers to do good in the world? (*insert evil laugh here*)  I had to make a few for myself as well.  This Jack Wilson is the second of what will probably be an entire run of Jumpin Jack Flash Supers.  Not that I'm compensating for the fact that I don't own a Jack Superfractor or anything... 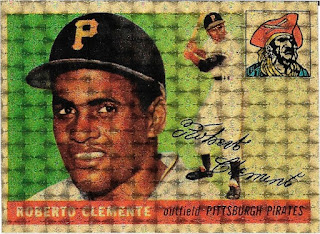 And by far my favorite of the bunch, I absolutely love how this Clemente RC turned out.  Topps actually produced one in a reprint set last year, but from the scan I saw online I'm honestly partial to my version.  I think eventually I plan to have a full run of rookie cards for all the Pirate HoF'ers done in the Superfractor style.

I'll have a longer writeup on the TC Con later this week.  We broke a mountain of boxes, including a couple of monster pulls, and it was a great weekend just hanging around and bs'ing with a group of collectors with similar interests.