A long, long time ago, basketball was my game.  I mean if there was one sport above all others where I knew every player, knew the result of every game, it was the NBA.  And the mid 90's were a pretty good time to be a young basketball fan.  MJ had returned to the sport where he belonged, and there were plenty of exciting players to at least make a challenge to his greatness. 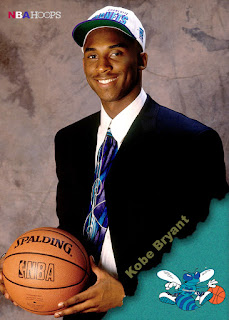 But the first year I really remember going crazy over a group of rookies was the 1996-97 season.  AI and my personal favorite Marcus Camby fronted the rookie class, but 8 year old me had high expectations for Kerry Kittles and Shareef Abdur-Rahim.

And there was that kid with the Lakers.

I distinctly remember being at the neighborhood garage sale that summer, and wanting a Kobe Bryant card.  Out of a full 9 pocket page of options, I went with a nice looking insert from Stadium Club - which may be the lowest valued of his rookie year cards.  But it's still one of my favorite basketball cards.

By the late 90's, my relationship with Kobe was more hate than love.  So much about the Laker teams just rubbed me the wrong way.  And my interest in the game dropped off a cliff when Jordan retired.

But it's been a pretty jarring realization that the last few of the guys I watched as a kid and teen are leaving the game.  It's a reminder of my own age, as is the newfound heartburn when I grab a slice of pizza at midnight.  And it's a reminder to appreciate those memories, even if it does make 27 feel more like 57.