With 3 weeks until the wedding, things have been a little crazy at Battlin' Bucs headquarters, and weekends still consist of running all over the city to finalize this, that, and the other.  This weekend was no exception. 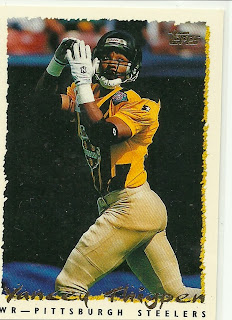 Saturday's headaches included dropping off my friend at the Magabus station for a 7pm bus (aka leaving the house at 6:30...not fun!) and then heading toward my parents house so Kate could take care of her final dress fitting, and then meeting up with her after to get our wedding rings (there goes the card budget for the next few months!).

But luckily for me right smack dab in the middle of Pittsburgh and my parents' is a flea market.  So 7:40, and there were were.  I had been to this flea market for the first time a few weeks back, and I was fully expecting some cardboard goodness.

And I was right.  Sort of.  A few weeks ago, one dealer had a nice array of boxes full of 90's goodies.  Well, more like mostly star commons, and some sweet numbered cards sprinkled in.  But for a dime box, that's pure gold.

This week the results were less spectacular.  The same seller had scaled back their card space to just two shoe boxes worth - one Pirates and one Steelers.  I was initially disappointed, but still managed to find some gems.

Things started off pretty slow.  After a hundred late 80's Topps cards, I came across a couple fun 90's cards.  At that point digging through the rest of the boxes seemed worth it. 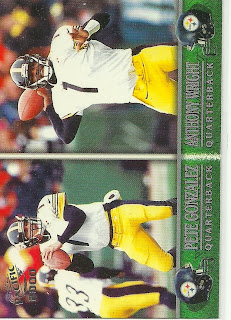 Pete Gonzalez was a standout qb at Pitt, and latched on to the Steelers as an undrafted free agent.  Pistol Pete didn't really see much action in the NFL, but he's still one of my favorite Steelers. 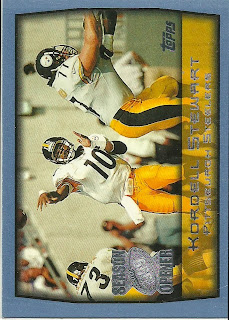 And the Opening Day (or whatever they call them in the other sports) releases are always nice finds.  A great addition to my slowly re-growing Kordell collection. 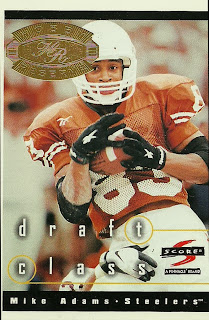 And then things got good.  Score Hobby Reserve - one of the many semi-tough to find base sets from the 90's.

And then it got even better. 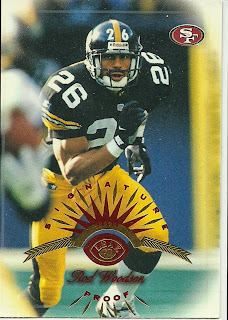 I was quickly flipping through the cards, so noticed a proof.  Into the stack it went.  When I got home I decided to dig a little deeper - Donruss Signature Proof /200.  I believe that officially counts as some 90's gold, all for a dime.

And to cap off the football box, I picked up a cool Hines Ward insert and a Canton 97 Topps parallel.  Not sure how tough those were to pull, but I'd imagine they were similar to the 98 Minted in Cooperstown parallels that fell 2 per box on the baseball side. 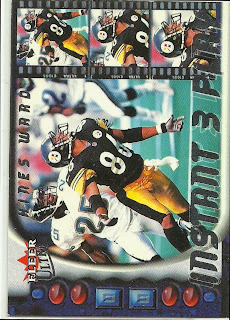 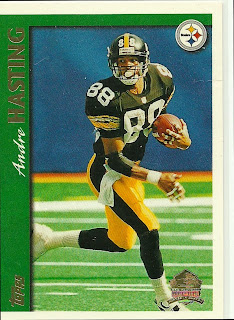 Speaking of which, I'll be back later today with what came out of the baseball box.
Posted by Mark at 12:00 PM