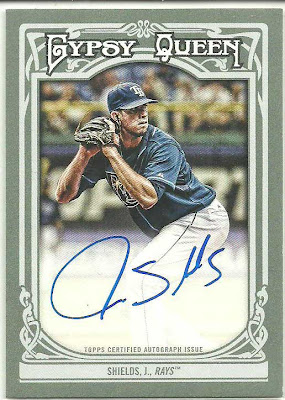 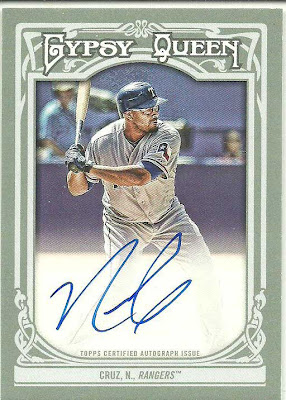 I guess I've always been pretty lucky.  Since my early teens, I've always had regular access to card shows.  Some big, some small, some certainly better than others.  But whether it was a mall show every few months or a large show attracting dozens of dealers, I've always been able to count on a show to get my fix.

Maybe that's why I never really caught on to the whole blaster craze.  I stopped ripping wax for good around 2005.  There was a slight relapse in 2007 over a box of SPx, but I quickly got back on the wagon after an Alay Soler auto as my big hit.

It just never made financial sense to me.  I'm frugal.  Or as my fiancee likes to say, "cheap."  And I'm ok with that.  I've built what I think is a pretty nice collection without ever feeling buyer's remorse over a purchase.  That's something I could never say during my wax breaking days.

Part of me avoids the blaster aisle at Target because I'm desperately trying to avoid a wax relapse some 8 years later.  But part of me knows it just isn't worth it.  For that $20, I can fill some holes in my Pirate collection.  Or grab some nostalgic 90's Steeler cards.  Or, for the days when my collecting interests stray a bit too broad, pick up some odds and ends autos.

And at the monthly show this past weekend, that's just what I did.  The Pirates cards were slim pickings - I came home with around 100 new cards, but almost all were commons.  Same for Steelers and Pens.  But while digging through a box of $.10 Gypsy Queen commons to fill out my 2013 team set, I decided to flip through the small box of unmarked cards.

At a show, this usually means one of two things: junk cards in toploaders, or overpriced hits.  The seller usually has pretty fair prices, and a wide selection of new product, so I figured at worst it would be the latter...and it never hurts to look.

Much to my surprise, the second card in the stack was a James Shields auto.  With a $2 price tag.  Two dollars?  This must be a mistake.  There was a Brock Holt auto sitting out on the table tempting me at an inflated $8.  How could James Shields possible be $2?  A throw-in to the Joel Hanrahan trade for 4X the price of the player who the Royals sold the farm for?

As I kept flipping through the stack, I noticed about half a dozen Gypsy Queen autos at the same $2 price tag.  I passed on most, since it looked to be the standard array of middling "rookie" autos.  But these two beauties came home with me...at the total price of a pack.

Another table had your typical gu/auto blowout sale, mostly consisting of no-name Press Pass autos and relic cards.  But for another $2, this Brian Roberts jumped out at me. 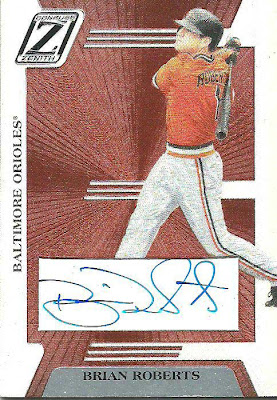 Roberts is an auto I have been after for a couple years.  I loved the O's as a kid, and have shared a tortured fan bond with the team for most of the 00's (the same love can not be said of the Ravens).

The last couple years I have been doing an autograph exchange with an autograph collector in Maryland - I get stuff signed for him at Piratefest, and he gets my stuff signed at O's Fest.  But each year Roberts has eluded me, probably due to his popularity in O's country.

Just getting a Roberts auto - and he sure does have a nice signature - would have made me thrilled for $2.  Add in a throwback jersey?  AND from 2005 Zenith, one of my top 3 favorite sets of all time?