I think I need a little break from my black and gold posting routine.  The last two games were tough losses to take.  But what better time to start showing off some other cards. 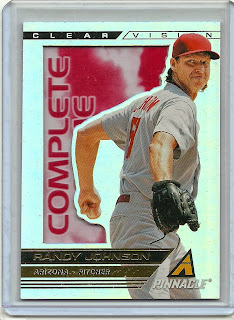 All these cards came from my recent flea market trip, and with the exception of the Elite Murray, which set me back a whopping $1, all these were dime box finds.  Sure, most of the cards would have looked a lot more impressive in 1998.  But I do love me some 90's goodness.

This Randy Johnson Clear Vision insert from the recently released Pinnacle set was a pleasant surprise.  I don't know how I feel about the tail end of his career Big Unit photo, and I have never been a fan of the Dbacks new color scheme.  But the red does look nice with the card background.

Panini seems to have mixed reviews on most of their recent products, but I flat out love them.  I may try to snag a box of Pinnacle at some point for an X-Mas break once this wedding craziness calms down. 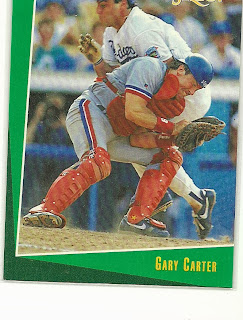 This play at the plate card (though the scanner did a terrible job of cropping it) is just flat out awesome.  And I somehow completely missed the memo that Gary Carter ended up back with the Expos in the 90's, 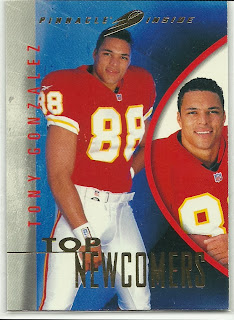 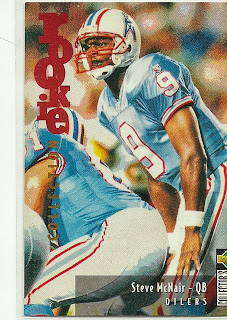 Moving to the football side of things, I scored a couple of sweet 90's RC's.  Since I've become exclusively a baseball collector (around 2000-2001), it has been easy to forget how awesome it is to have simple, straightforward logic with RC designations.  Don't give me this crap about a rookie logo - if it's a guy's first card then it's the one I want.  But I do like the excitement of pulling a hot rookie from a pack, rather than pulling an airbrushed photo of an 18 or 21 year old in a pack full of similarly airbrushed 18-21 year olds, the rest of which will probably be out of baseball in two years.  End rant. 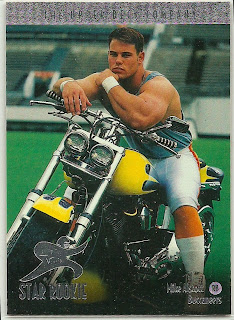 Speaking of awesome, check out this Mike Alstott rookie.  I'm not sure if he thinks he's posing for Esquire or a bike magazine.  Either way, it just screams 90's.  And I will forever love the Bucs creamsickle uniforms, even if it's just the pants in this photo. 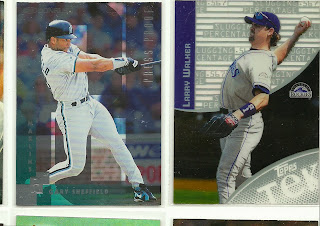 I loved the Marlins uniforms during the team's early years that featured teal heavily.  And the quirks of Joe Robbie Stadium made for a fun park, at least in terms of field layout.  The team is pretty much dead to me once they changed the colors, name, swindled taxpayers out of millions, and decided to revive art deco.  And most of my friends from Florida agree.

Topps Tek was an insane set, and I still need the vast majority of the patterns from the Bucs.  *hinthint if you have any Aramis Ramirez or Jason Kendall Tek cards, email me* 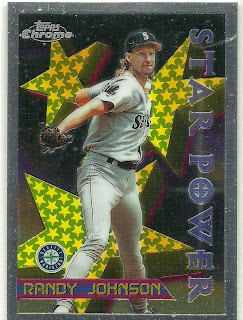 Speaking of things that are no more, this card is one of the most visually appealing cards I've seen in a while.  The scan doesn't do it justice, but one word: etching.  The card is etched to hell and back, including the stars and text.  Take note Topps.  Just having a card that's kind of silvery and curls to much that it almost folds in on itself is not the same, no matter what those jackasses willing to shell out $40 for a Harper base card may think. 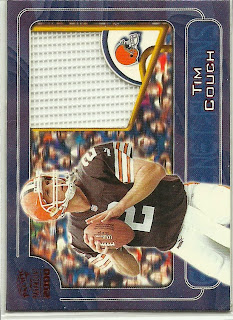 I hope I don't get my Pittsburgh card revoked for this one, but this Tim Couch insert is just flat out awesome, with some kind of weird mesh netting in the card.  Tim Couch's career?  Less awesome. 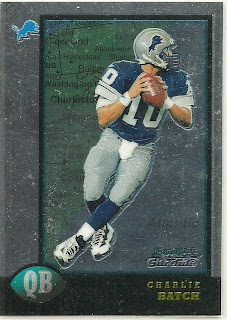 But this guy's career worked out a little better.  Before becoming the Steelers permanent backup QB, Charlie Batch was the latest, greatest hope in Detroit before Barry Sanders finally took the ball and went home.  Again, the Chrome scan didn't take so well, but this International parallel looks awesome, and highlights his Pittsburgh roots.  All around super pickup for just a dime. 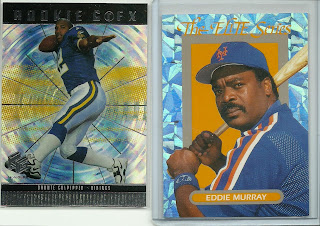 And last but not least the big haul.  No, not Daunte Culpepper.  These Elite Series cards were an insane pull in the early 90's, and still bring a decent chunk of change.  I snagged this one for a mere $1.  I would have been 1000 times happier if it were Van Slyke or Doug Drabek, but I'll take it.  This one may become trade bait (are there even any Mets bloggers?) or hit ebay at some point.  But it's not exactly going to set my bank account on fire, so it may just stay in the collection for a little while.  Or at least until I'm able to get one of the Bucs from the set.  But geeze...I love the 90's.  And thankfully quite a few card dealers do not share that opinion.

The black and gold goodies will be back in a couple days, now that the offseason is officially underway for the Bucs.  I have a couple cool features in mind, as well as getting back to the Topps team set countdown.  But until then, I hope you guys enjoy my menagerie of oddball pickups.