I Went to a Card Show, But Came Home With More Than Cards

Editor's Note:  This post got a little out of control.  I think the word count on this post more than makes up for not posting for a month straight.  If you just want to see what I bought, scroll to the end.  If you decide to read all the way through the post, thank you - I hope it's worth the read.

When I was 5 years old, my parents decided that it would be a good idea to hold a surprise birthday for me at Chucky Cheese.  Let's just say that was the first and last time they surprised me.  In general, I'm just not a fan of surprises.  But on occasion I'm willing to make the odd exception.

And this past weekend's card show was full of surprises.  The good kind.  As I mentioned yesterday, the show held some surprises.  But there were some surprises from me as well.  I'm usually pretty good about adhering to a strict budget when it comes to collecting.  And while Kate is more tolerant of my idiosyncrasies and collecting habits than I could possible hope for, I think she does occasionally have nightmares of me trying to create an entirely Pirates themed house, complete with Bucco kitchen and bathroom (for the record, I plan to keep my collection nestled into my man cave.  I actually enjoy interior design, and we have some completely non-sports themed plans for our future house).  But when I found myself wavering on a big purchase, I was a bit surprised to see her actually pushing me to treat myself and spend over budget rather than the other way around.

Judging by some of the comments, many of you are probably wondering just what it was that I came home with.  A Clemente cut signature?  Three Rivers Stadium seats?  A signed Barry Bonds game used bat?  I actually saw all three of those items at the show this weekend.  But no.  I'll need to save for a few more years (read: decades) for some of those items.

I'm going to spread my big finds out in chronological order over the next few days.  And don't worry, I'll sprinkle in some cardboard adventures as well, though they admittedly pale in comparison.  I'll get into exactly how I found myself in this situation in the next installment.

For today, some back story.

I have what I think would be safe to say is a pretty impressive sports collection for a 26 year old.  About a dozen game used jerseys.  A few game used bats.  Nearly 13,000 different Pirate cards.  Nearly 2,000 Pirate autographed items.  Enough bobbleheads to fill an entire book case.  I hope it doesn't come off as big headed.  I've been a sports collector and fan for as long as I can remember.  But my collecting has always been done on the cheap.  Flea markets.  Garage sales.  Dime boxes.  I've never put purchases on the credit card or snuck hid my expenses from my significant other.  Just about everybody in this hobby has overheard a story at a local card store, show, or online forum of guys who have done so - and it never ends well.  Hell, I imagine Kate and my parents are probably sick of hearing about how excited I am because I finally found a copy of a Jack Wilson 2003 sticker that was only available from Japan, and the ensuing 3 minute explanation of how the set was distributed, and why this is a huge find.

See, the thing is that most of, whether we have incredibly supportive friends/significant others/pets or live alone, rarely get the chance to connect with other collectors.  That's part of the reason why we write and read blogs about sportscards.  And attend shows.  And spend time on online forums.  To meet those people with similar interests, passions, and maybe learn a thing or two.

I met Dan a few years ago at the very same Robert Morris card show, when he was selling off his doubles at blowout prices.  Except the thing was that his doubles were so nice - autographs, gu cards, low numbered inserts - that I thought he was selling off his actual collection.  Dan's a great guy.  Middle age, friendly, pretty good job, and a love of the Bucs.  We see each other a few times a year at signings, shows, and the occasional game.  You see, Dan has the collection that I wish I could afford.

I ran into Dan around 1:00 Saturday.  We were just chatting, discussing our purchases while I gave him crap for paying for Jim Rooker's autograph when he asked if I had seen his buddy Todd's table.  It was on the back row, where most of the grading companies, auction houses, and other things I have little interest in are always set up.  Once I said no, he said come with me and I'll introduce you.  This guy has some great stuff.

Great was an understatement.  But I'll get into that later in the week.  Todd was downsizing his collection as he and his wife were moving into a smaller space.  It was a once in a lifetime opportunity to have a chance to buy some insanely limited pieces.  But more importantly, there's the human element.  As we were walking over, Dan told me Todd has the collection he wishes he could afford.  I was no math whiz, but I think by the transitive property that makes Todd my collecting dream squared.  And while I spent more than a few hours eyeing up all the pieces available, all the items I could possibly take home, the best part were the conversations we had.  Three dedicated collectors just talking about our collections, our love of the Pirates, and the ways that we materialize those memories into our collections. 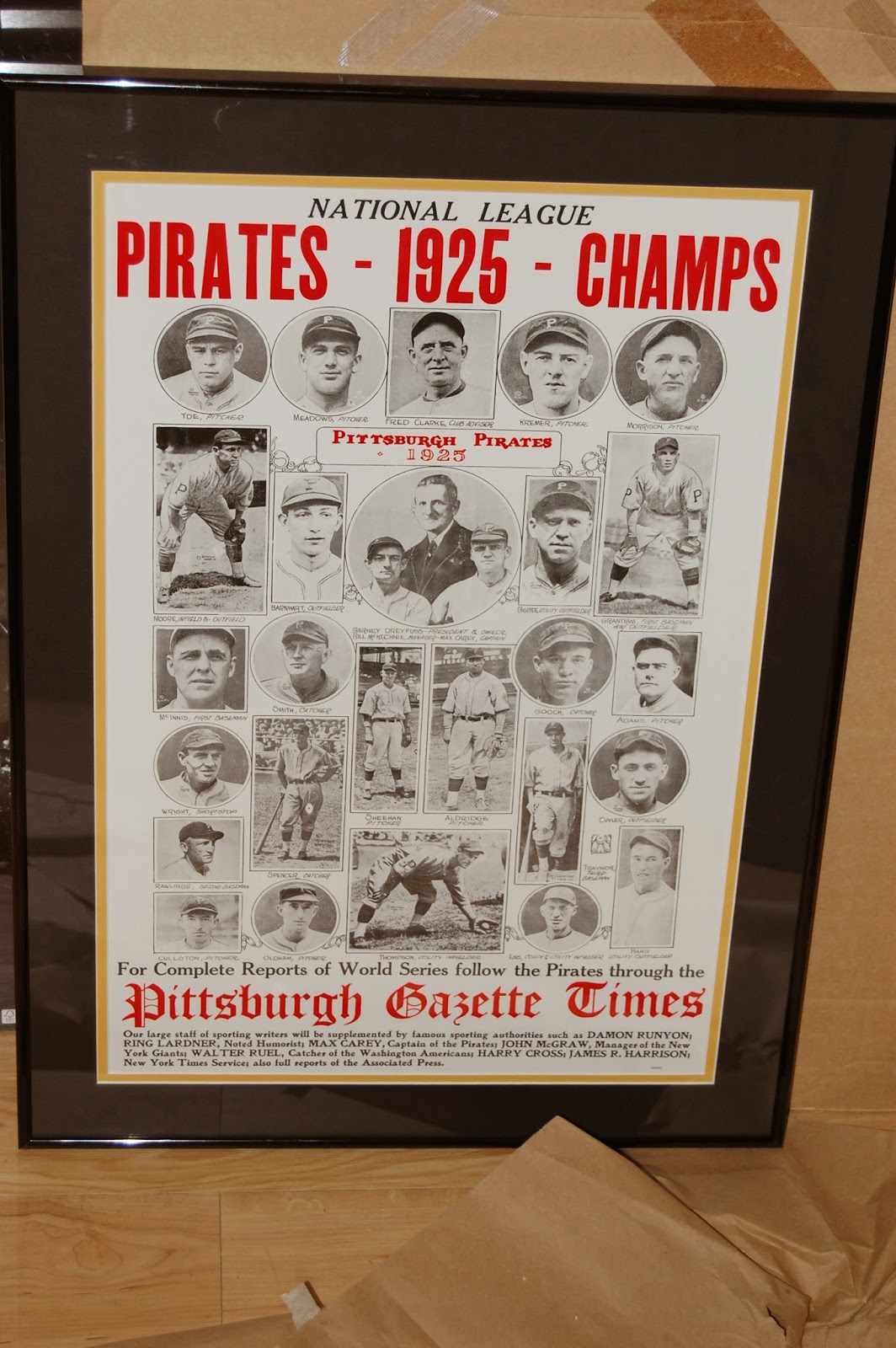 That, more than anything else, is why I collect.  To take the love I have for the history and identity of the sports team of the city I will always call home, and those thousands and thousands of hours I have spent inside a baseball stadium watching a game - memories with my dad, with my wife, with friends and ex-girlfriends long gone from my life - and turn those memories into tangible reminders around me.  So with that said, my purchases had two goals in mind: 1) add some unique high end pieces to a collection that has a lot of little stuff, but few things that make you go "wow"  2) Add unique items that recognize the rich history of the team, without being too dominant in my collection

This was the oldest piece I bought chronologically, but also the last one I picked out.  This poster is absolutely amazing.  It's a reprint, which from what I've read online is from approximately 1980, of an original newsstand poster following the 1925 World Series.  The Pirates won the series in 7 games, defeating the Washington Senators.

I love the old-timey feel of the poster, and and the '25 team features some Pirates all-time greats in Kiki Cuyler, Max Carey, and Pie Traynor.  Only 4 reported copies of the original poster exist, but even the reprinted version I have appears to be pretty rare.  And how often do you find something commemorating the 1925 World Series?

You'll see the World Series theme pop back up as I get around to showing off the rest of the memorabilia.