Nooooo Doubt About It: A Future Arts and Crafts Project

There are probably a dozen games that really stand out to me as being special.  Of the hundreds of game I've attended and the countless more I have watched on tv, only a few really stick with me.  Special moments that define my fandom.  I've posted before about some of the great memories Brian Giles created for Pirate fans, even if he was kind of a dick.

I've been really focused on adding some cool memorabilia from the late 90's/early 2000's sweet spot of my baseball years.  The years between 1999-2009 were just really special years for me as a baseball fan and as a kid growing into semi-adulthood.  The only problem?  Not much for the Bucs going on in those seasons.  The final year of Three Rivers.  The 2006 All-Star game.  Jason Kendall, Brian Giles, Jason Bay, Jack Wilson, and Freddy Sanchez.  Some of my all-time favorites, but not exactly anybody that will go down in history.  There were some amazing moments, but I've had a tough time finding memorabilia that would do them justice.

And the weekend looked like no exception.  Todd had dozens of beautiful pieces, but as you have seen they are largely centered around the sweet spot of Bucs history - 1960, the 70's, Hall of Fame players.  Not much love for the 100 loss cellar dwellers of the 00's. 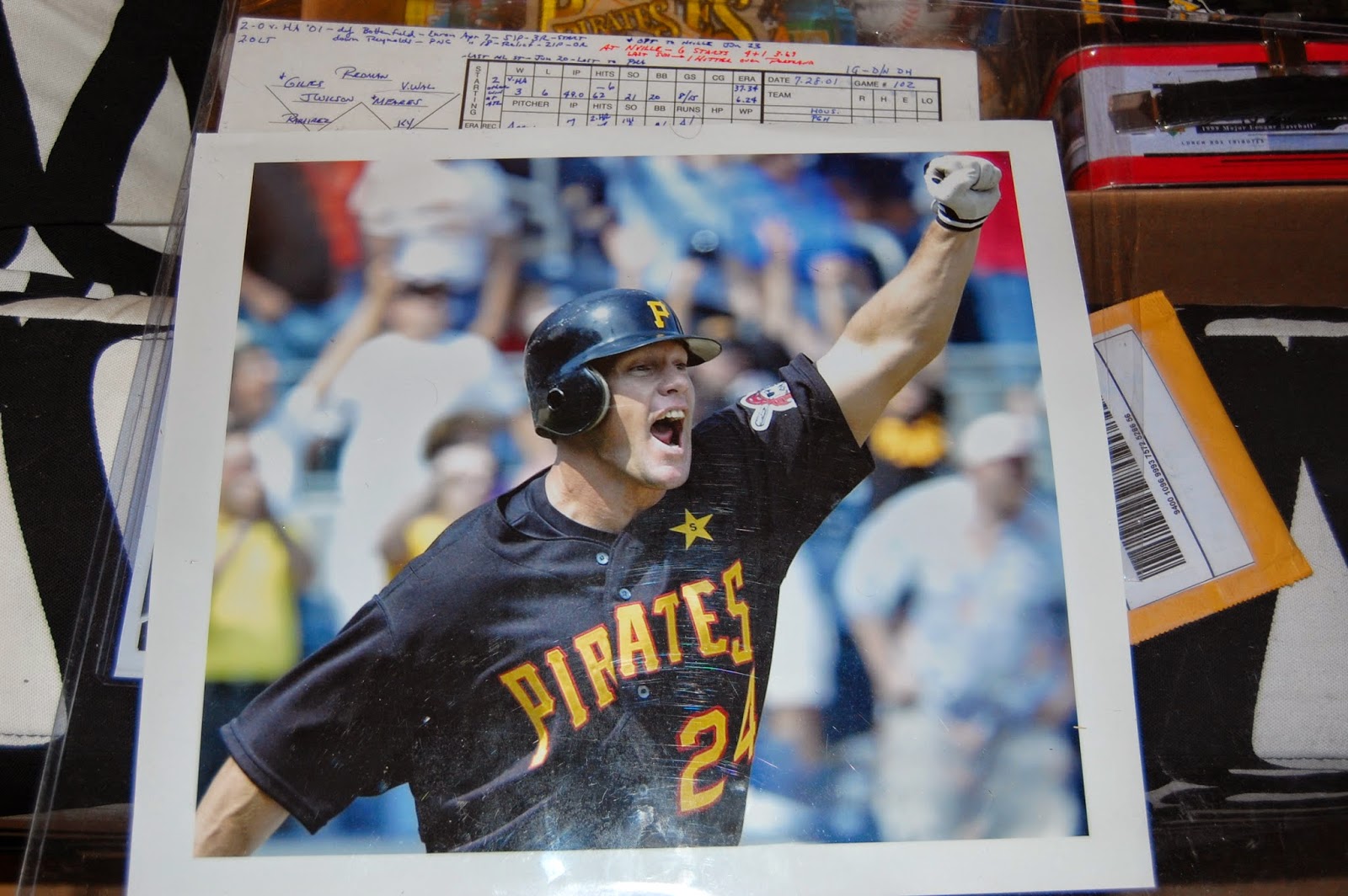 But flipping through a stack of odd posters and photos, I saw this photo.  Probably doesn't mean much to anyone.  Except for this little historical tidbit.

With two outs in the 9th, the were down 2-8 to the Astros.  About 20 mins later, they would walk off the field with a 9-8 win, capped off by a Brian Giles walk-off grand slam.  It was the magic moment of the 2001 season.

I asked Todd for a price, thinking for $5 or so I would love to frame the photo.  Until he said, "wait, did you see what else there is?" and flipped the oversized toploader over. 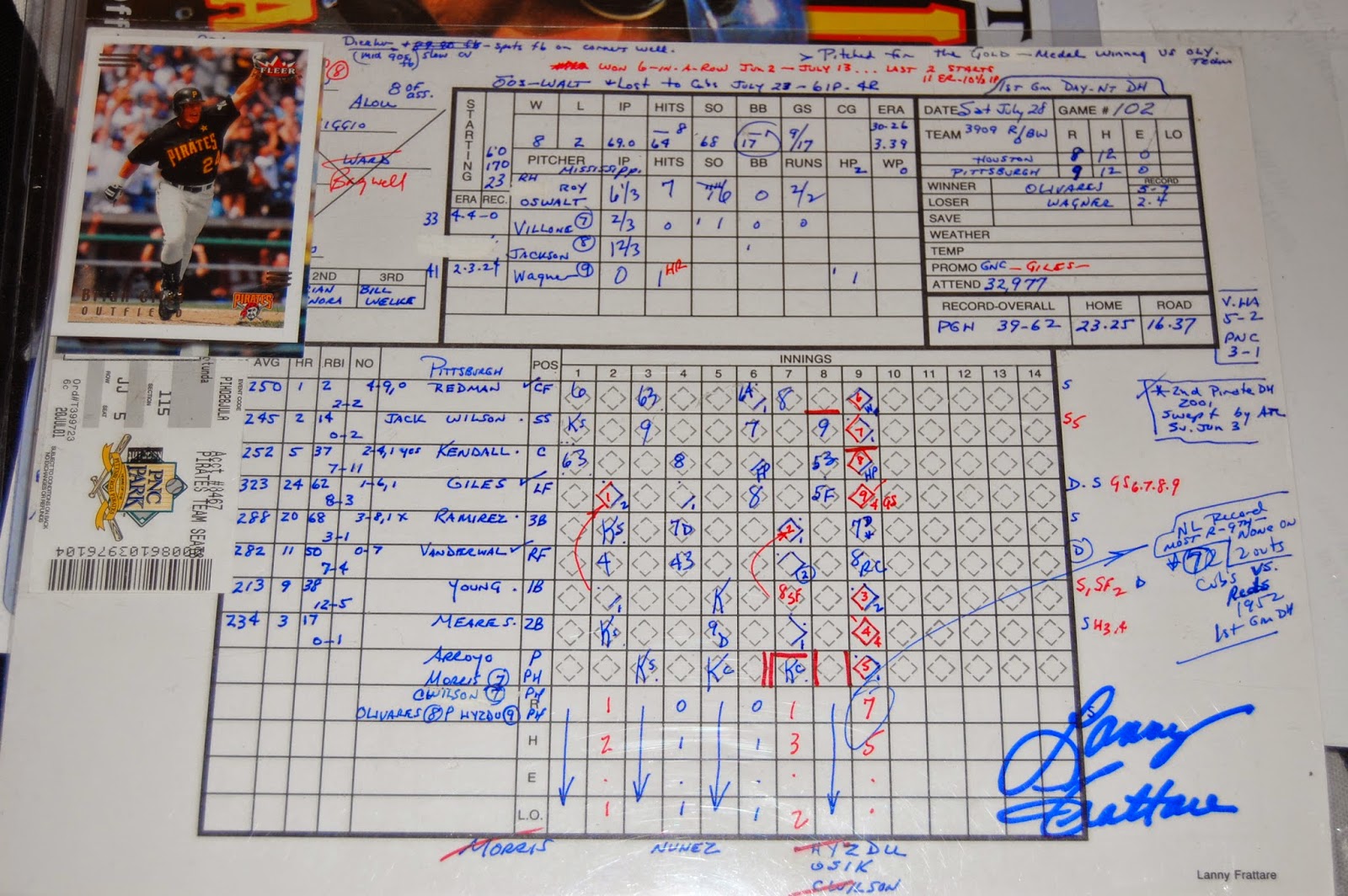 Tucked behind the photo was an array of related memorabilia that he had hoped to turn into a framed display piece, but never got around to it.  The gem is the original scorecard kept by Bucs lead broadcaster Lanny Frattare, the voice of the Bucs for over 25 years (who can be heard in calling the play by play in the video above).  The scorecard also has some really cool notes on the margins, presumably stats, facts, and tidbits he wanted to work in throughout the broadcast. 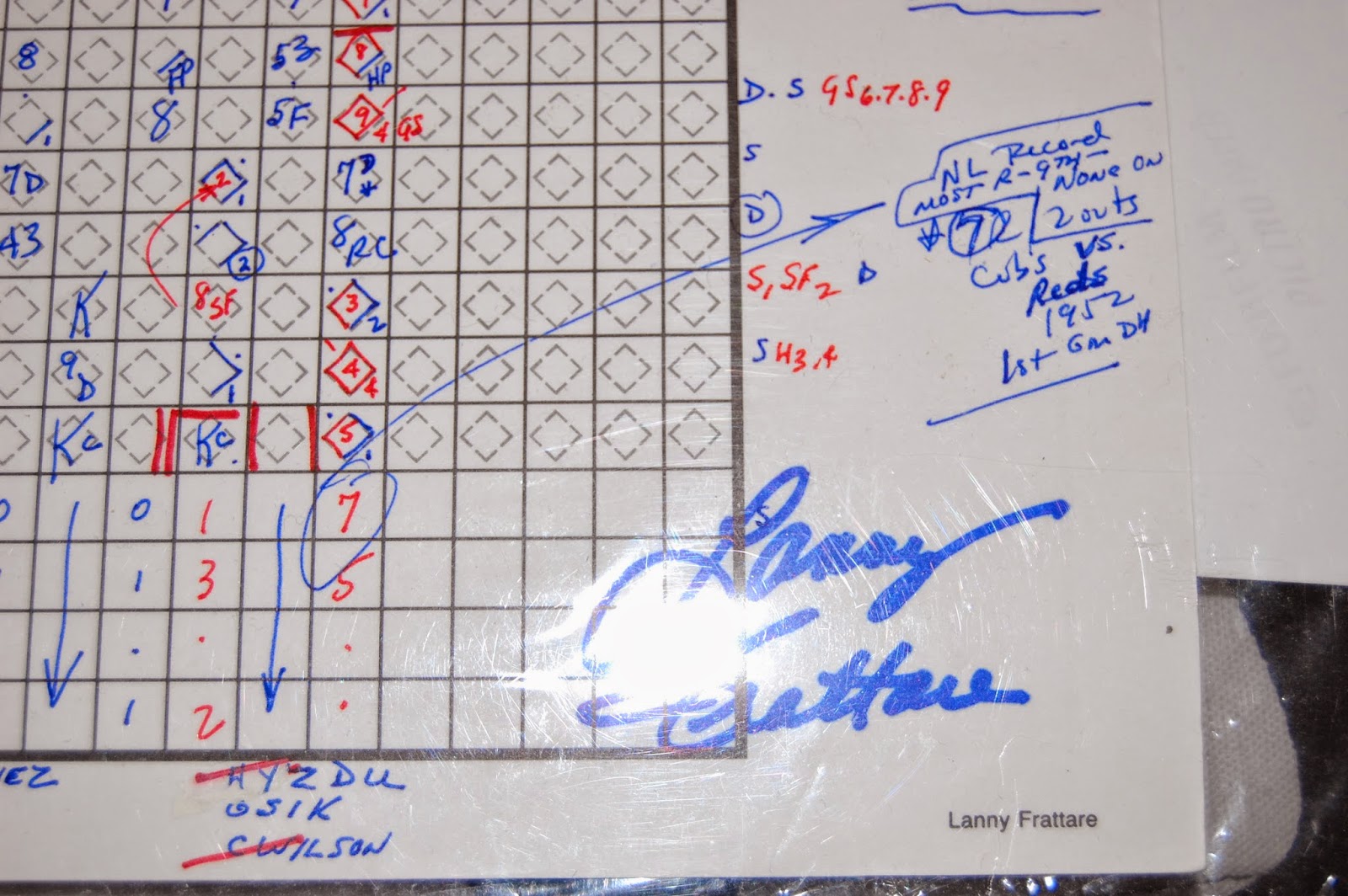 The package also includes a ticket from the game (I have two of my own from the game, which I'll probably swap in for Todd's), a couple cards featuring the fist pump after the HR, and a few other Pirates promotional materials that also recaptured the moment.

There was no question that this piece was heading home with me, a major addition to the stretch of Pirates history that means the most to me.  Maybe it's not the most visually impressive piece compared to the other pieces I picked up, stuffed in a toploader awaiting the time and cash to frame it properly.  But this is undoubtedly one of my favorite Pirate memories, and it is completely mindblowing to me that I now have a one-of-a-kind piece of memorabilia from that game.
Posted by Mark at 8:58 AM