Impulse Buys, Set Collecting, and the Art of Finding a Good Deal

I' mentioned a while back that I decided to start collecting the 1998 Donruss Signature Series autograph set.  I had the best intentions of sticking to the 99 card base red set.  I swear, I really did.

And then...I didn't.  After all, most of the 90's star power was short printed to be in the parallel sets only.  So my altered mission statement was the red set plus whatever select players who didn't make have base autographs that I could afford.

I was browsing ebay last week when I spotted one of those very short printed cards - Ellis Burks.  Burks was perhaps one of the lesser of the Blake Street Bomber crowd, but this was a great chance to pick up an auto of him.  Better yet, it was only $1.99.  Reading the auction description, I noticed the card was an un-numbered version, presumably one held back as a replacement that later made its way out the door during a bankruptcy sale.   Such things rarely travel by themselves, so I checked the seller's store to see if there were any other '98 Signatures. 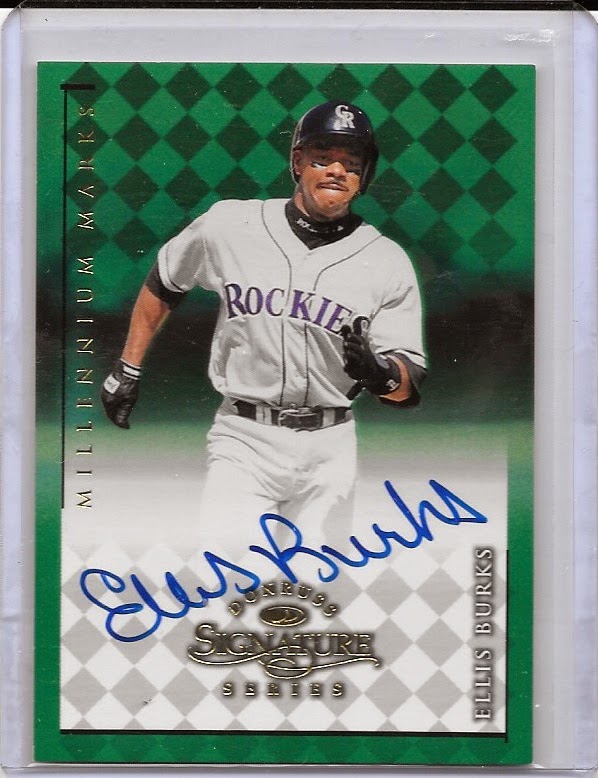 As luck would have it, the seller had a handful of un-numbered greens and blues, all at decent discounts on what the card would sell for as the numbered, pack pulled version.

And after all...combined shipping, yada, yada.  So yes.  I technically violated my rule of just having one autograph per player in the set.  But...the blues just look so damn nice.

All 5 cards ran me about $15.  That's the price of a single pack of the 1998 set when it released, which most likely would have yielded something like a Kevin Orie base auto.   Shot of winning the lottery there's no way I'd ever complete the actual master set.  But I do think I'll round up as many of the blues and greens as I can when they can be had for a decent price.

Or at least that's what I'll tell myself for now...