But so is the life of the player collector.  A plain white swatch of jersey.  ...that some company decided to limit to 15 copies.  Insert rant about artificial scarcity here. 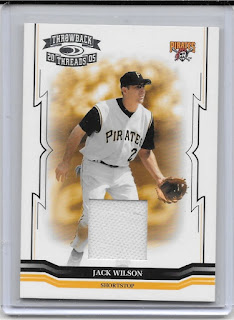 But with how infrequently I'm able to land new cards from the ever-shrinking list of Jack cards I need, I was happy to overpay to land this guy.  It's the only copy I recall seeing for sale, and it's not like people are rushing to ebay to dump their really rare plain white jersey swatches of middle infielders not named Vizquel these days.  But as for me?  I couldn't be happier with my plain white swatch of cloth.