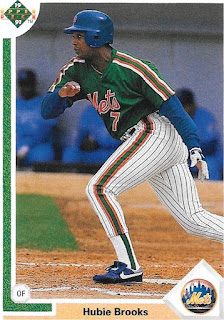 Flea markets are always hit or miss for me.  Around here, there are always numerous vendors set up with sports stuff.  But more often than not, the guys act like they're a mall sports store (note: it costs like $10 to set up at the flea market...that isn't the same as having the rent for an actual store!).  Insanely high prices, acting like that common autograph is the holy grail of collecting, and hoping that everybody that stops by has absolutely zero knowledge of the card market.  More often than not, I end up walking by after a couple seconds.  The faded boxes of their bobbleheads are usually a dead giveaway, a victim of sitting out in direct sunlight for weekend after weekend after weekend at prices nobody will ever pay.  No, you aren't going to get $15 for your Ryan Doumit bobblehead.  Yes, there are 6 copies at the nearest Goodwill.

When Kate and I hit the flea market last weekend, it didn't look promising.  After the first couple rows, I had spotted a few things I was interested in.  But the prices were either insanely high, or there weren't any prices.  Maybe I'm weird, but just like at a card show, I like to see some actual prices on your stuff.  I hate playing the "how much do you want for _____" game. 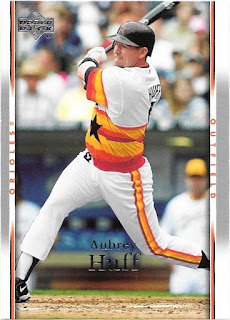 After going down two or three rows without any hopes of making a purchase, I was starting to worry I could leave empty handed.  And there was no way I was going to let that happen. 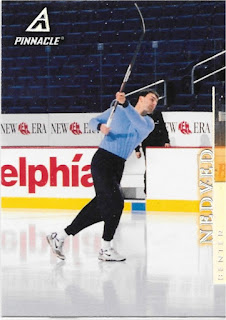 I came across a vendor with a few boxes out.  He's a regular, and I've looked through his stuff in the past, but always walked away due to inflated prices.  But I was desperate. 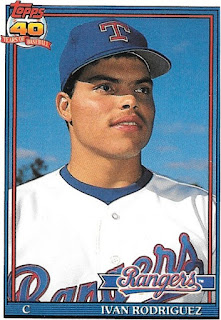 He had some boxes out front labeled as dime boxes, but he said anything in the boxes was a nickel.  Deal.  I started digging through the rows, which were broken down by year.  At some point, most of these cards have to belonged to an Indians collector, because each row had a short run of all the Indians star cards of the year.  And while there were only a couple Pirates cards, I did snag some nice finds for my collection. 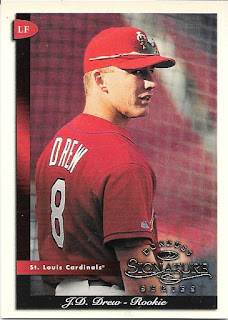 In the late 90's, some of the rookies would have netted a pretty penny.  I also grabbed Bowman Chrome rookies of Travis Lee and Sean Casey, both of which sold for a nice chunk of change at one point.  For $.05, why the hell not. 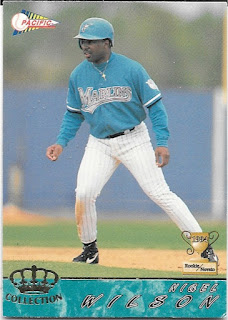 Having accumulated a whopping $2 in cards, I needed to keep buying.  I needed to, dammit!  Or at least I needed to kill some time while Kate did her own shopping.  So over to the dealer's toploadered boxes I went.  Most of the cards were, as expected, overpriced.  He told the cards were 1/5th of what they were priced.  And while I appreciate priced cards, doing math is not as exciting to me. 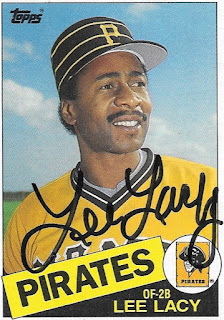 It looked like most were priced at full book or above.  A McCutchen Topps Chrome refractor priced at $20.  And while $4 is a better price, so is the $.50 copy on Sportlots. 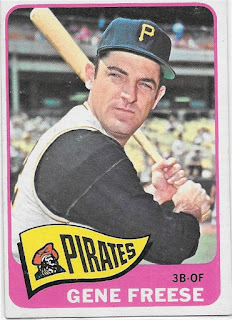 But I came across some autographs in the box.  The pricing seemed inconsistent.  $4 (post-discount) for a Zane Smith auto?  Nah.  But the significantly tougher Lee Lacy for $2?  Sure, why not. 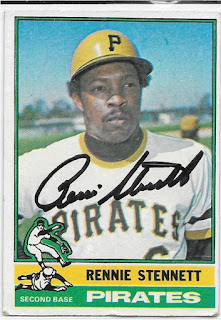 I ended up paying $2 each for all three of these cards.  The Freese is a high number, and while I may have been able to get a cheaper copy at a bigger show, it probably wouldn't be by much and this one is in nice shape.  Stennett is an auto I didn't have and have been after for a while, while the Lacy is an upgrade over a lightly signed ballpoint pen signature I have of his.

And I figured that even if that was it for my finds for the day, I did pretty well.  And then, like all my flea market finds, I stumbled on some stuff that would empty my wallet.  I guess I never learn...

I'll have the real goodies up in my next post.