It's a weird feeling, being out of the hobby for an entire year.  The last "collecting year" I missed was 1999.  But I was still a wee tike back then, and my "collecting" never ventured above the $1.50 a pack range.  It's a little weird being completely out of touch with the hobby. 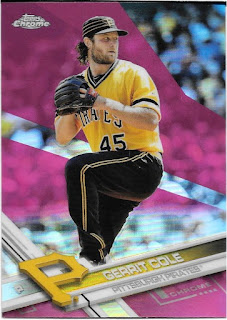 But on the plus side, it should make adding 2017 cards pretty easy.  No pesky remembering what I already have, or if I have the blue sparkle ice diamond refractor parallel of said card.  It has 2016 stats on the back?  I need it.  Easy peasy. 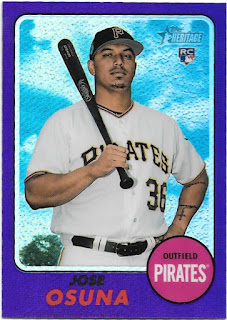 The other week I sent out a few mini packages to some collectors in the team collector group I've been a part of for the last 6 or 7 years.  It's a great group, and I've been woefully slacking not just in my collecting but in my friendship over the last year.  Taking a break from collecting meant there hasn't been a lot new I have picked up to send out.  But it also meant that some new collectors joined the group for teams that had previously been unclaimed. 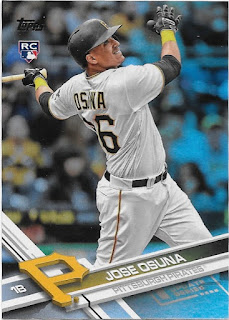 Time to unload some cards!  I sent out a small batch of packages, and our new Reds collector dropped some goodies in my mailbox in return. 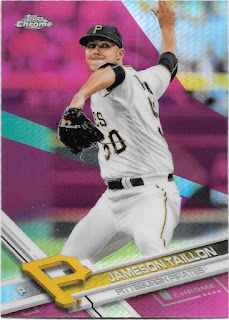 As luck would have it, all 2017!  Refractors are easy enough to figure out.  Heritage is purple, and Chrome is pink.  Got it.  Foil?  No problem. 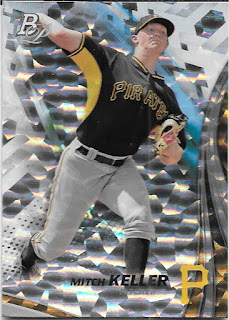 These Bowman...something cards?  Bowman Platinum?  Are they base?  Ice?  Something else?  I could search Beckett, and probably will when I get them entered into my spreadsheet.  But if anybody can id these cards for me, you get some instant karma. 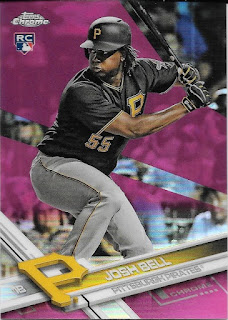 One thing I've realized over the last couple years is that Chrome without borders makes for some weird cards.  Sure, you can mostly tell what color a refractor is without much work in most cases.  But the colored borders really made the cards pop.  The colored backgrounds just don't do it for me.  Maybe I'm in the minority, but I do miss borders. 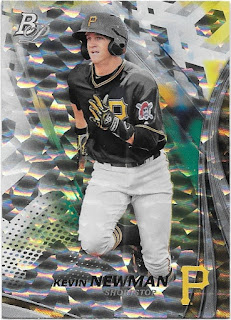 It was a great package overall, and slowly starts chipping away at my woefully empty 2017 collection.
Posted by Mark at 5:52 PM