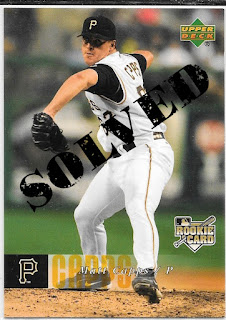 As I get back into the swing of blogging (semi) regularly, I'm trying to find some ways to spice up my postings both to keep myself engaged and to offer something to the readers that's more than just a look inside my binders and mailbox.  One of my favorite and least favorite parts of collecting has always been untangling the mysteries behind some of the hunks of cardboard in my collection.  I love stumbling across a card or set that I'm not familiar with and tracking down its origins.  But it can also lead to some real head-scratchers.

Over the coming weeks I'm planning to feature some of stranger, unexplored, and occasionally unanswered when it comes to the hobby.

And the first entry starts right in my own back yard.  I wrote over three years ago about an unsolved case that I came across in one of my dime box digs.  I found these two cards in a dime box at a show, and they caught my eye.  Something seemed different about them, so I tossed them in my pile and kept flipping through the box.

When I was doing my post-mortem on my show pickups, I took a closer look.  They're identical to the base cards in 2006 Upper Deck, except they lack the foil logo and player name of the set.  One reader suggested UD's Special F/X release, but those cards hard a Chrome-like finish.  These are plain, glossy base cards. 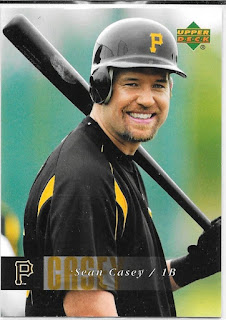 I posted on all the major forums with no leads.  I was stumped.  I looked through Beckett, Trading Card DB, and other online resources with no further luck.  There were no photo matches out there.

And then I got a bite.  Just minutes after this segment aired, a call came into our Unsolved (Cardboard) Mysteries call center.  One of my the collectors in my Team Collectors group had a lead.  The cards were part of a promotional giveaway in 2006.  As part of a kids' day giveaway, they gave out a binder with a 9 card set of Pirates inside.  I've been unable to find any of the sets available anywhere online, but have seen a few of the binders pop up for sale.  The Mariners also participated in the giveaway that year, though I'm unsure if any other teams did as well.

Join us next time when an uninvited guest gets mixed up with a high end card.  *spooky music*