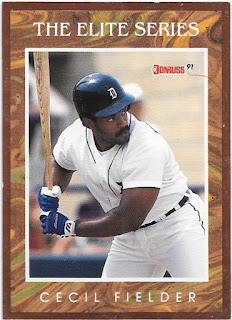 On Sundays, we take a trip into a random binder page from one of the 29 teams that isn't the Pirates...

My "other team" binders are hit or miss.  Teams I casually follow, like the Mariners or Marlins, come pretty close to filling their own binder.  On the other hand, the whole NL West fits in one 1 inch binder.  Call it East Coast Bias.

The size of these other teams pages are usually determined by two major factors: A) did they have 90's stars who hit lots of homers and B) do they have cool uniforms and/or logos.

B is a major factor.

And in the case of the Tigers, their classy and classic uniform and color combination is to be commended.  But not celebrated in the pages of my collection, apparently.  They're smushed into a binder with a dominating Indians collection.  The Tigers?  Aside from autographs, they only make up a couple pages.  But hey, quantity not quality!

And a '91 Elite Series card?  That's come quality.  I think I picked this up at a show or flea market for $1.  I can safely say I spent way more than that on packs of '91 Donruss hoping to pull one of these.  But I'm one of those sickos that like the '91 Donruss design, so it wasn't a total loss. 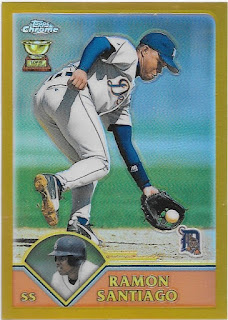 No matter the team, I end up hanging on to a lot of refractors.  Gold refractors are tough to beat in my opinion.  Add in a rookie cup and we have a winner. 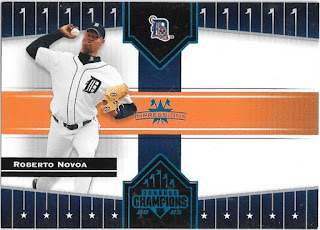 Speaking of which...occasionally I come across a card that is...less than binder worthy.  I loved '05 Champions, and the blue parallel on blue background is a nice look.  But I couldn't for the life of me tell you anything about Roberto Novoa.  Google says he spent 3 years in the majors, 2 of them with the Cubs.  So I probably even saw the guy play.  Huh...oops. 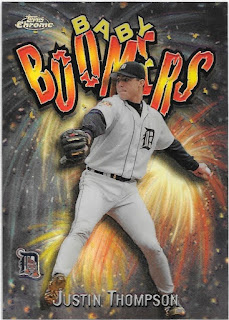 The late 90's were a strange time for pitchers.  Justin Thompson made the All-Star team as a 24 year old in '97, had two rough years, went to Texas as a major piece in the Juan Gonzalez trade, and then his shoulder imploded.  He and Tony Saunders were early lessons on "don't bet on pitchers."

I should get that on a damn poster on my wall.  Kris Benson, Luis Heredia, Stetson Allie, Sean Burnett, Bobby Bradley, John Van Benschoten, and Gerrit Cole later... 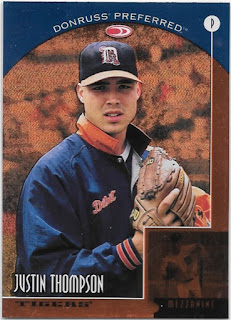 Donruss/Leaf/Playoff Donruss was decent while it lasted.  But original Donruss?  That was the stuff. 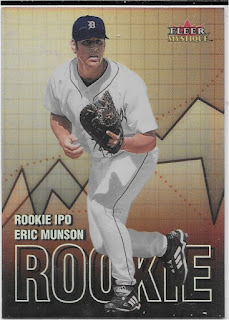 One of the things that I really miss in modern cards is the willingness to take a risk, both in design and on players.  This Rookie IPO insert is fun, even if the design is a little less inspired than maybe it could have been.  But they tried it, it was ok, and then life moved on.  Topps seems to trot out the same insert sets each year, with the same general checklist.  Am I the only one that gets bored. 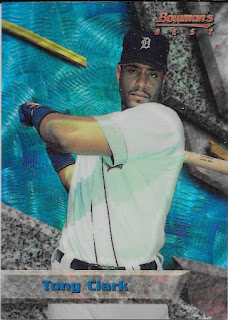 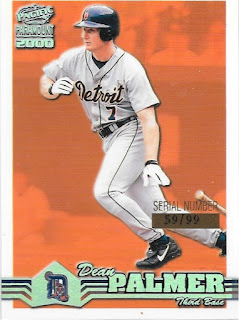 It's interesting to see how the hobby goes through cycles.  Today's hot player is tomorrow's answer to a trivia question. It's hard not to get caught up in the hype, but also sort of fun to see what cards you can score for pennies on the dollars years down the road.  Dean Palmer's most similar batter on Baseball-Reference is Jay Bruce.  I bet Bruce cards are selling for a fair penny more than Dean is right now.  By my math, I can probably get my first Jay Bruce auto somewhere around 2022! 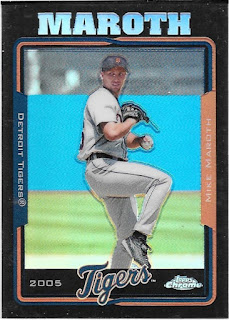 Most of the cards that make it to a binder make it on sheer willpower - they're sparkly, or shiny, or have a cool throwback uniform on them.  But on occasional there's a merit based selection.  One of my collecting pals used to work for the Disabled Veterans as a writer.  He worked on all kinds of cool projects, from documentaries on ex-players who served in the military to DAV sponsored card sets that would be given out at stadiums.  He always speaks highly of Mike Maroth, and how he was one of the most generous and kind players he met in his career working around the game.  And that alone was enough to earmark at least one slot in the binder for a Mike Maroth card.  But being shiny didn't hurt...

I finally dipped my toe into the water on 2018 Topps.  I'm a bit late to the party, but I'll have some thoughts up tomorrow.