I Prefer My Jerseys Used

It's been a while since I've added a new Pirates game used jersey to my collection.  My goal is to get one of every style worn by the team, but since the team partnered with Hunt auctions prices have gone through the roof.  I imagine the majority of these jerseys are being put up in a dentists office or basement with a very expensive pool table, and will reappear on the secondary market once the player leaves the Bucs.  And when nobody wants to pay $400 for that jersey that is worth closer to $100...

But I digress.  In the past, I've shown off my 1979 era throwback jerseys - a black Daniel McCutchen and pinstriped Ronny Cedeno.  But of course the crown jewel of the trio is the gold jersey, which was both the most commonly worn jersey during the Bumblebee days, and the most frequently worn as a throwback.  I had my eye on a Ruben Mateo years ago, but didn't pull the trigger.  I've been kicking myself ever since.

And then this beauty showed up in my ebay searching.

Better yet the auction ended for just over $50.  It is by far the lowest I've paid for a TBTC jersey, and I think almost half what the Cedeno went for.

The jersey was listed as a 2010 and game issued, a year that Pearce had only a handful of plate appearances.  But that didn't seem right, since I didn't remember the Pirates wearing that style in 2010.  After plugging in the MLB holo number, it confirmed my suspicion that the jersey was from a 2009 TBTC night.

Pearce started at first base, going 1 for 4 in the game.  Not exactly extensive wear, but it's about the best you can hope for with a one-off jersey.

Better yet, I have a pretty cool photo from the game featuring Pearce and our old friend Lastings Milledge. 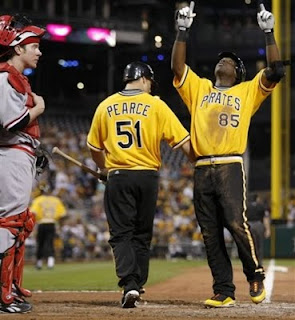 I'm still waiting for the day when I can properly display my game used jerseys, but in the mean time this finishes off my Bumblebee trio with one of my favorite Buccos who never quite made it work in Pittsburgh.

Email ThisBlogThis!Share to TwitterShare to FacebookShare to Pinterest
Labels: jerseys