No Cardboard, No Cry

The 4th of July usually means fireworks and baseball, but we decided to switch it up a bit and head to Rogers, OH for some flea market shopping.  We actually went last year over the 4th weekend as well, which was our first trip there.  It's a good flea market, but with any market it can be hit or miss.  For the number of vendors and the insane traffic and crowds, it wasn't a home run.  But I picked up some very nice pieces. 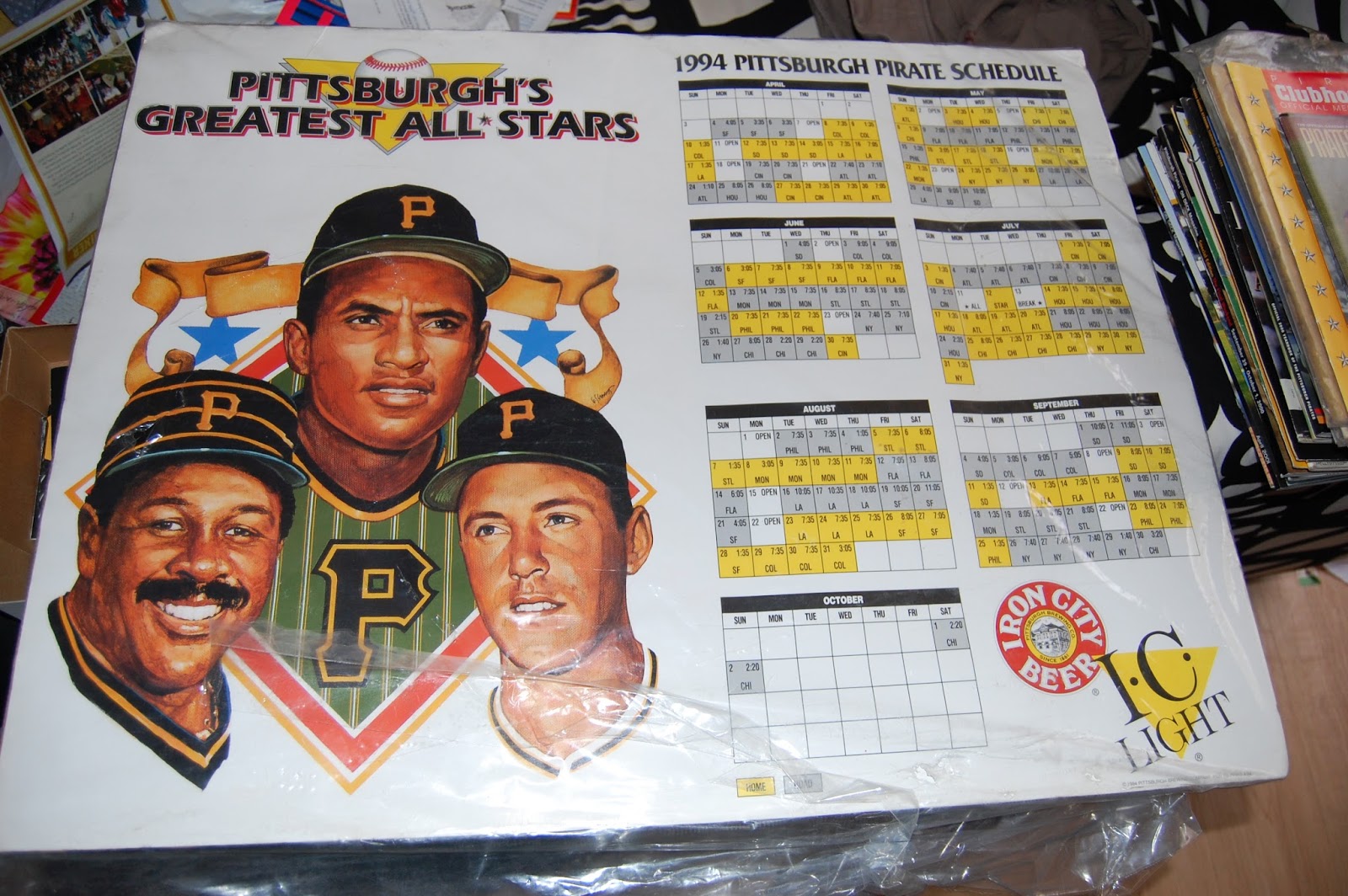 We walked around for quite a while until something stood out to me.  But when it did, it did in a big way.  I've been on a bit of a print/litho kick lately, if you've been reading over the last few months.  This piece features Maz, Stargell, and Clemente on the left, and the Pirates 1994 schedule on the right.  It's a little smaller than your average movie poster, so it would take up a good chunk of wall space.  I'm not sure that I want to dedicate that much room to an overblown pocket schedule that's 2 decades outdated.  I may cut/fold it down to just display the art portion, though that Iron City ad in the lower right corner may give me just cause to show off the whole thing.  And besides, maybe someday my future children and their friends can learn of a wonderful world before freaking interleague games every. single. day.  But I digress...
The seller initially asked $10 on the piece.  Within a matter of seconds of me not responding to his initial offer, he had made 3 separate counteroffers, landing at $5.  I managed to bundle in a couple of 70's Pirate scorecards he had, getting the trio for $10 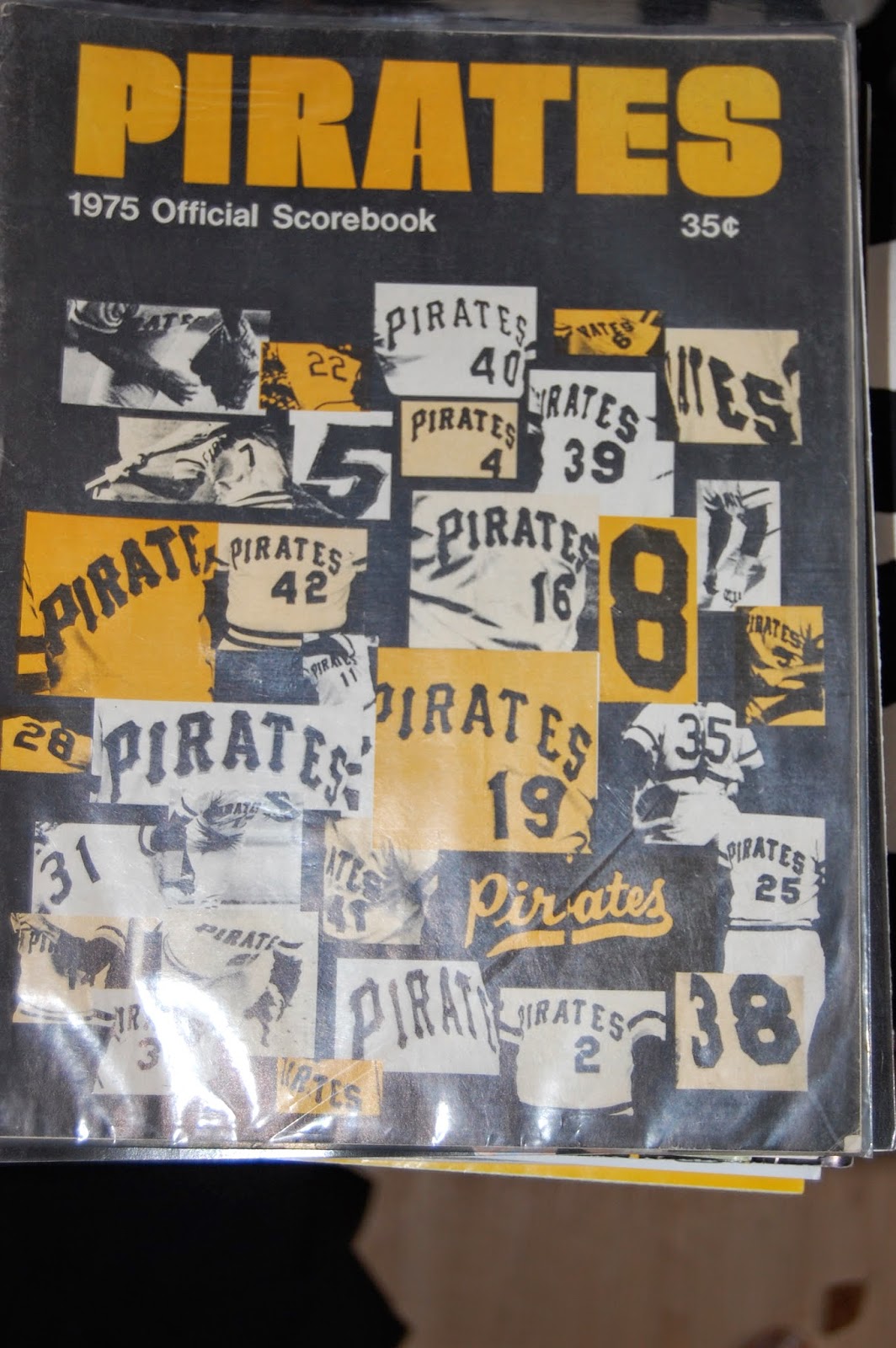 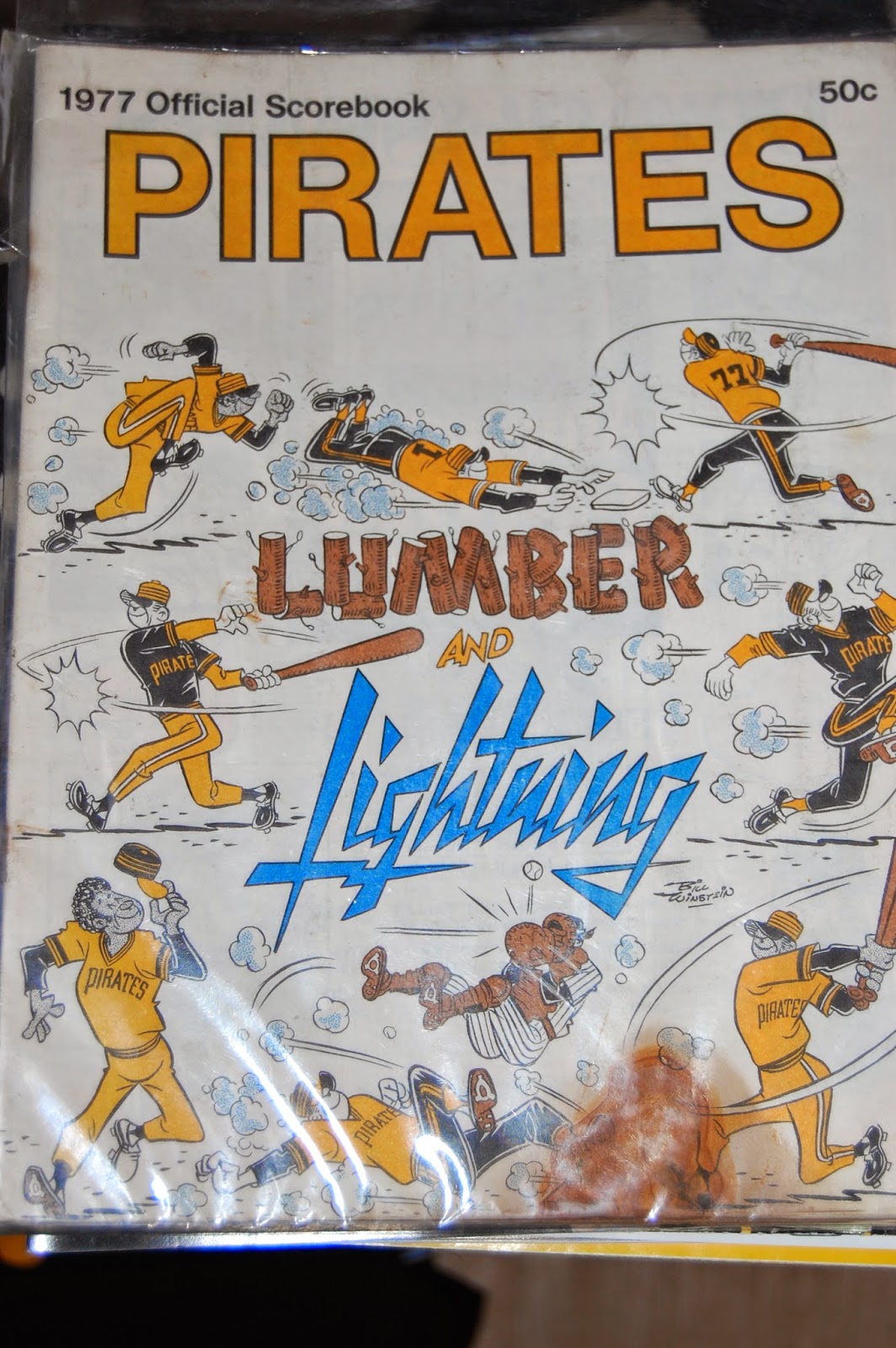 It was a program kind of day apparently.  A couple rows over I came across a regular dealer who usually has Pittsburgh sports memorabilia.  He had a stack of pennants, and some odds and ends photos, programs, and the like.  I picked up a 1962 Pirates yearbook with some slight damage for $10, and got him down to $5 on an awesome looking 2006 ASG pennant. 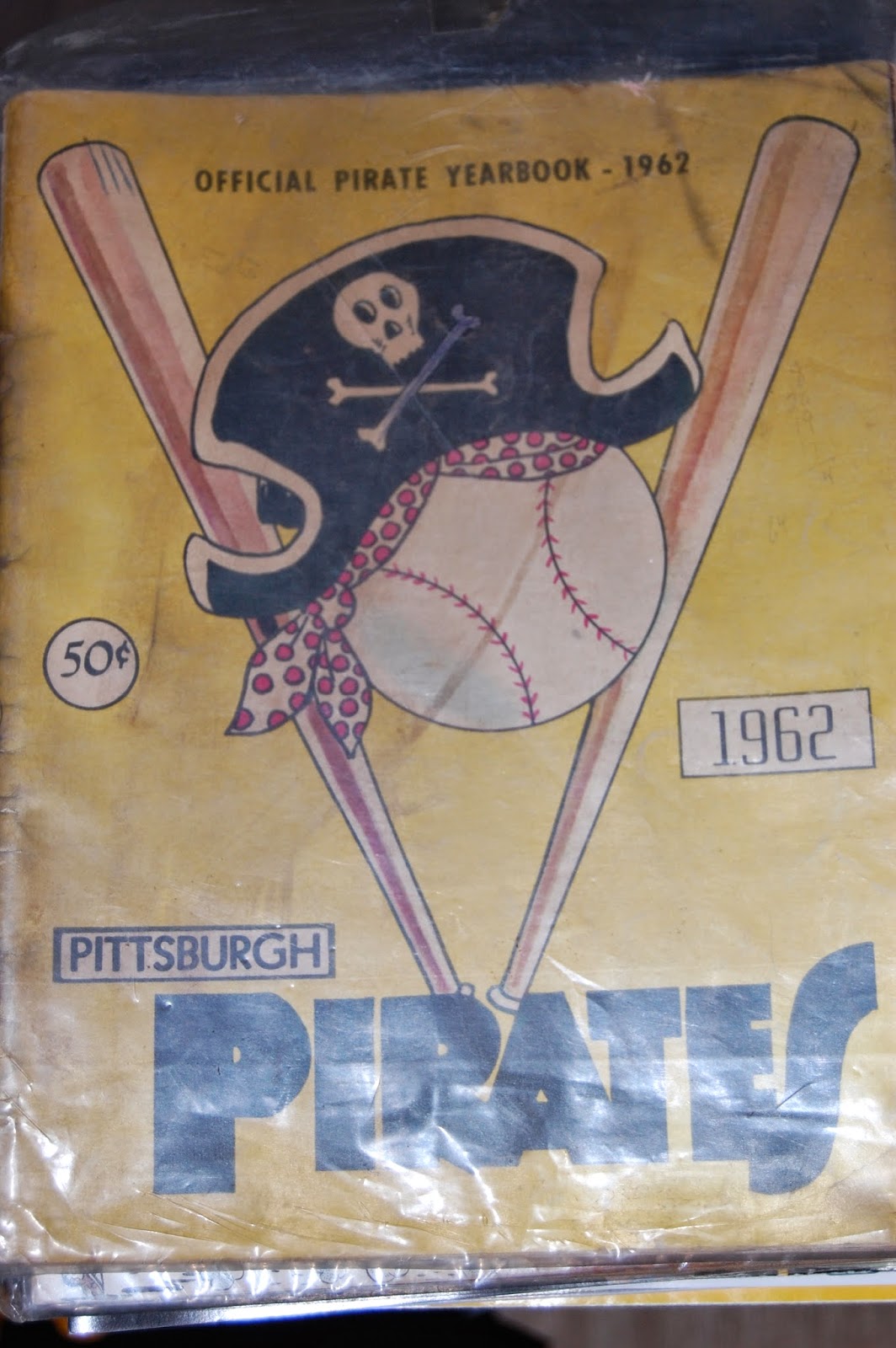 I've amassed a pretty nice pennant collection over the last year or so courtesy of local flea markets.  But the fragile tips and general flimsiness of them has me worried.  Pennant toploaders seem like a pretty pricey investment, but also seems like the only real option for longterm display/safety.  I'd hate to just ram a couple thumbtacks through them and stick them to the wall. 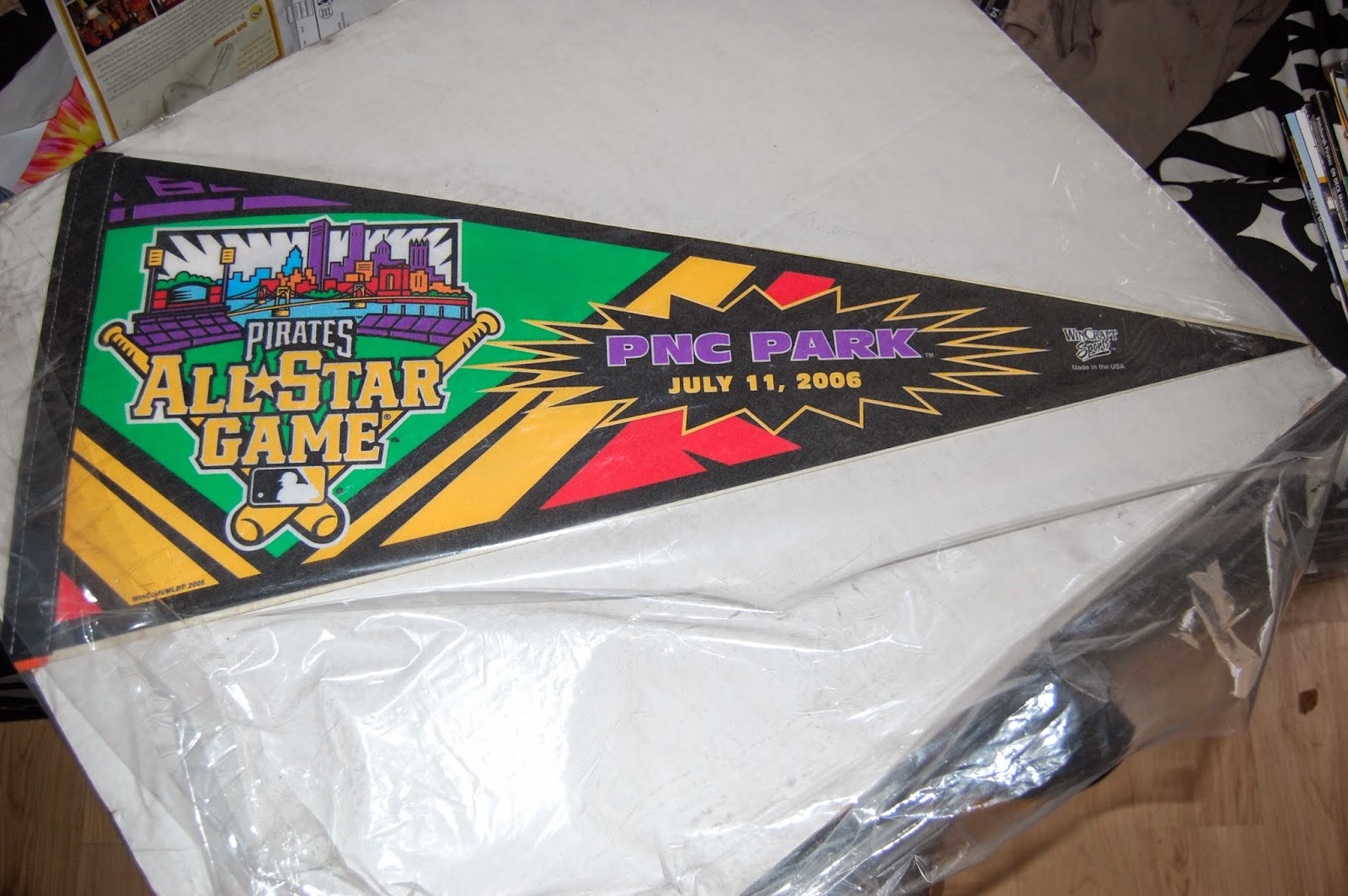 If anyone is more well versed in pennants than I, any tips on display/storage would be greatly appreciated.

What I had lacked in quantity, I easily made up for at the end of the day.  Kate was looking through a vendor with a few boxes of postcards (her first foray into collecting), and I wandered around a bit nearby.  I saw a dealer with some Penguins shirts in front of his table, where I snagged an awesome argyle print shirt with the 90's Pens logo complete with new tags for only $3.  Further back in his cove of tables he had some Pirate magazines - yearbooks, programs, some random stuff.

Nothing was priced, but he said they were $2 a piece.  At that price, I quickly grabbed up a half dozen or so that I was interested in.  The dealer came over and said I could take all the programs for $10.  Considering I already had more than $10 in my pile, I eagerly pulled out a ten while he boxed up the lot for me. 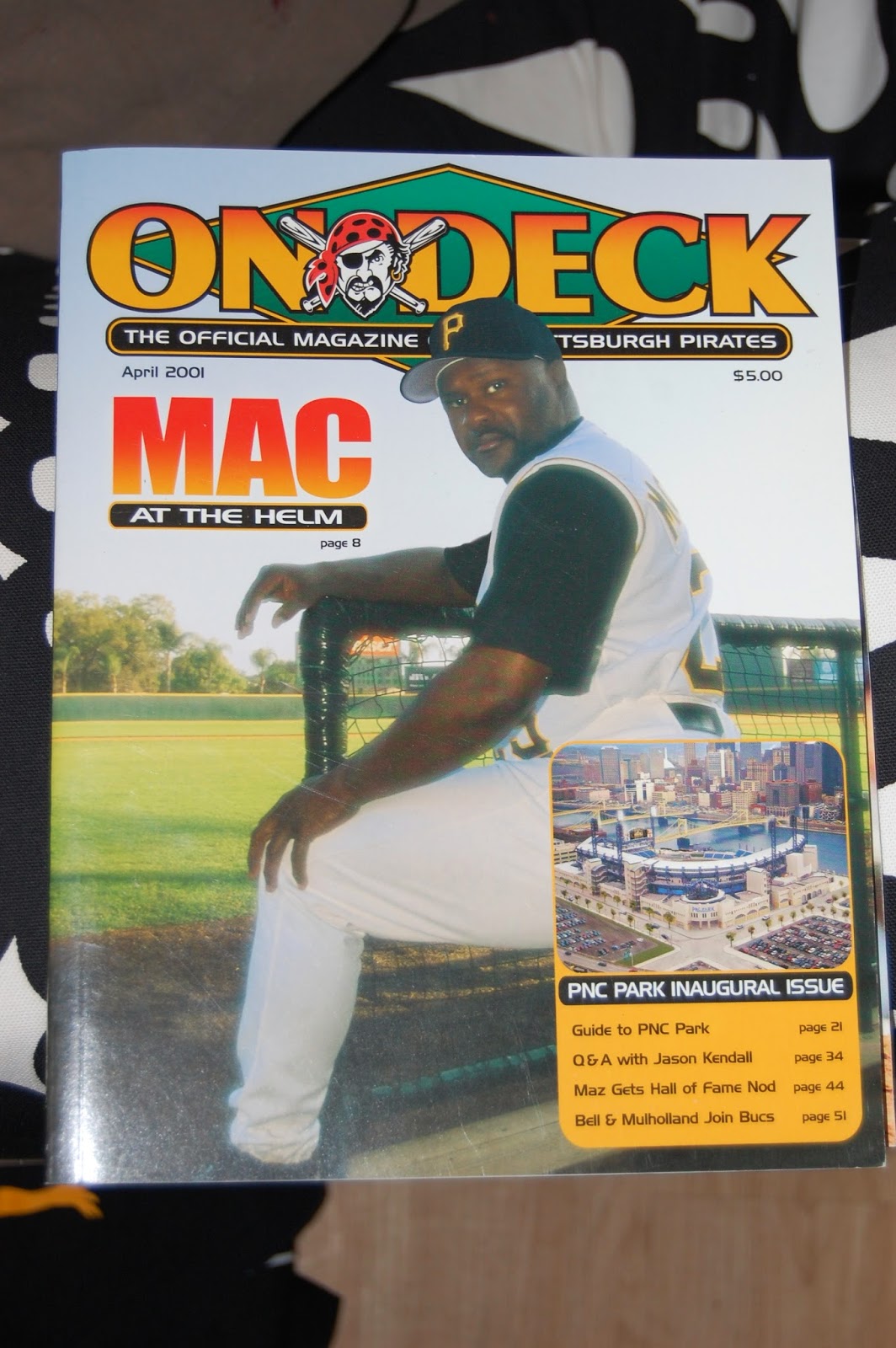 The vendor said that the collection came from an estate sale, and that the owner had worked for the Pirates in some office capacity.  Cool story, and I figured I could go through things in a bit more depth when we got home. 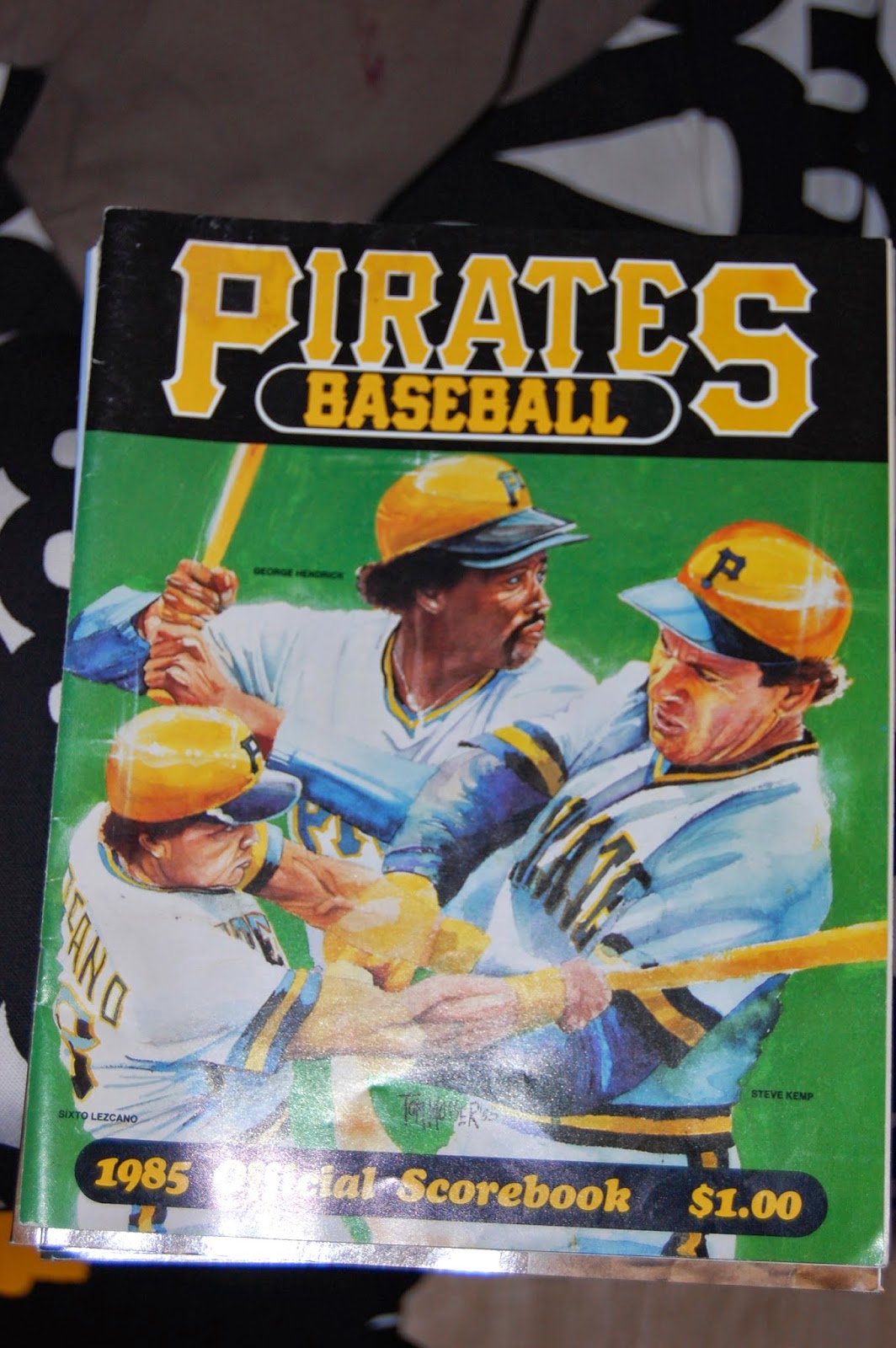 And boy was I pleased.  The box contained magazines, scorecards, and promotional materials from the mid 80's through 2001.  There was a business card attached to one - apparently this guy had been in the Pirates front office doing financial work for the team.  There were relatively common items - the On Deck Magazine, four media guides from the 90's, a couple 80's scorecards (seriously, can anything scream "We're in trouble this year!" more than Steve Kemp, Sixto Lezcano, and George Hendrick on your scorecard?).

But the real treasures for me were the oddball items - a couple Pirates' investor reports, magazines from the late 90's touting the future PNC Park, a merchandise catalogue (does anybody else remember those?) from the 1994 All-Star game, and what appears to be a back-area pass from the 1992 Stanley Cup finals. 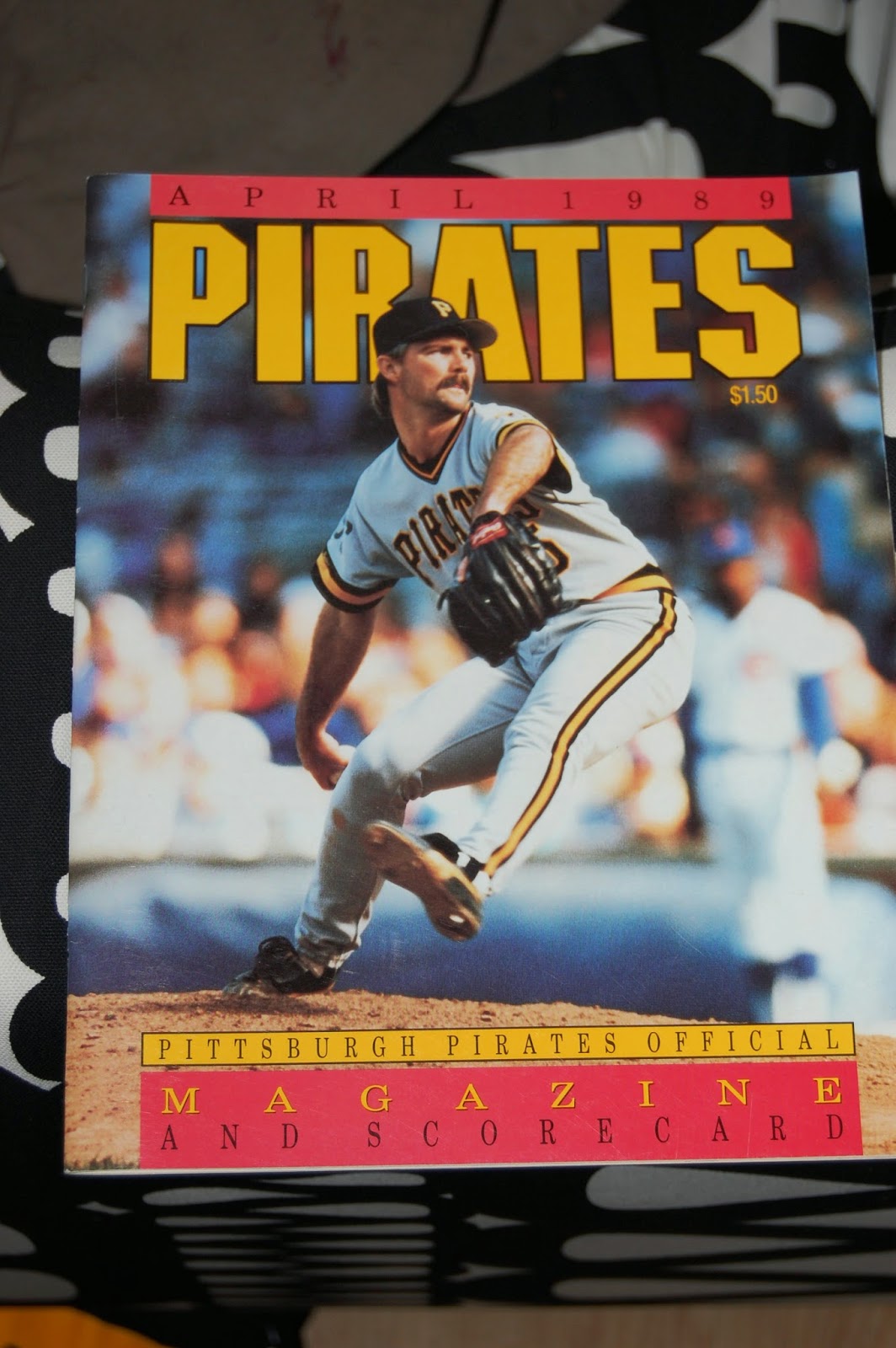 I guess this only adds to my problem of having way too much stuff and no idea how/where to display it.  But if nothing else there is some awesomely dated reading material in here.  I think I've been slowly building an unofficial Pittsburgh sports archive.  Even in this day and age of everything being digitalized and nothing ever really leaving the internet, it seems kind of cool to preserve some of these things that probably rarely got a second glance after they were published.