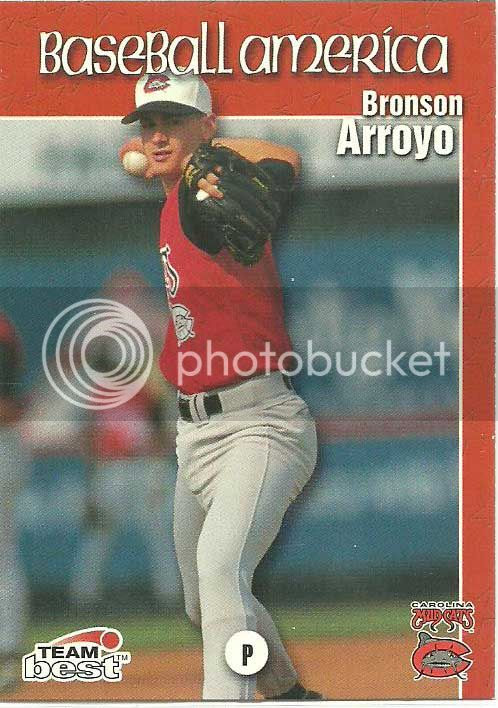 Bronson Arroyo pitched for the Pirates.

This is probably a fact both Arroyo and Pirate fans would like to forget.

Bronson was drafted by the Bucs in the 3rd round of the '95 draft.  He moved fairly aggressively through the system, reaching AAA at age 22, though he posted solid, but never dominant, numbers at every level.

When an insane string of injuries to starting pitchers hit the major league team in 2001, Arroyo was called up to the bigs, seeing extended time as a starter and long reliever.  He likely wasn't fully ready, and could have used more than the 25 AAA starts he had under his belt.

He spent the majority of 2002 pitching back at AAA, with a brief callup to the bigs.  His numbers looked strong, and there presumably would be space for him in a weak starting rotation in 2003.  After all, the 89 loss club of 2002 wasn't exactly setting the world on fire.

Instead, the Pirates placed Arroyo on waivers in early 2003, where he was claimed by the Red Sox.

And what happened to this Arroyo fellow you ask?  Oh, just a decade of consistent starting pitching.  Fortunately the Pirates have had that in spades over the past decade, so it was no big loss, as evidenced by our string of division pennants, while Arroyo's subsequent employers, the Red Sox and Reds, have wallowed in the cellar of their respective divisions.  Or...something like that.