The Kratz Out of the Bag

Catchers and middle relievers both tend to have some interesting career trajectories.  Sure, there is the occasional super prospect like Joe Mauer rushed to the majors to almost instant success, or the young flamethrower who makes a name out of the bullpen.  But the majors are also littered with guys who has a little less pedigree who spent years working their way up the minor league ladder.  And a large number of them do their work right smack dab in the middle of the action.

Erik Kratz is one of those feel good stories.  I'm sure there are a few newspaper articles that detail his great story, but basically he just about quit the game after spinning his wheels as a AAA catcher for a few years before earning a callup with the Bucs in 2010 at age 30.  Over the past two seasons, he's made a nice little mark in the majors as the Phillies backup catcher with the Phillies, including some extended playing time at the beginning of this year. 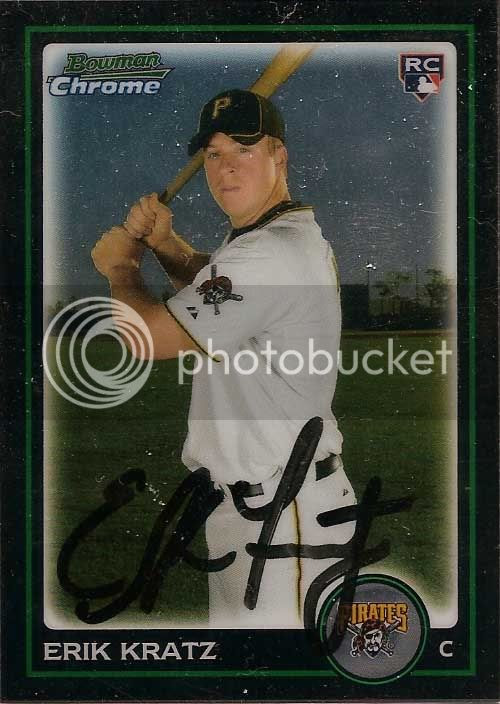 Kratz is the kind of player who you can't help but cheer for.  I had a brief interaction with him before a AAA Indy Indians/Columbus Clippers game in 2010 (prior to his callup) and he was a super fan friendly guy, who seemed genuinely excited to just have the chance to play, regardless of the level.

I sent this card out to Erik early in 2011 while he was still at AAA, and it came back signed in lightning quick time.  It would have been nice to see him stick with the Bucs a bit longer, but you have to be happy for him to get an opportunity.  Of course the Bucs have found a pretty nice backup catcher of their own in Michael McKenry.