Things have been slow-going for the collection this summer.  No card shows, busy weekends, and erratic work hours have kept us busy.  But we managed to squeeze in a little flea market time two weekends ago, making the trip about an extra 25 mins south of the city to hit a flea market before catching a 1:35 Pirate game on Sunday.

It was overall a bit of a bust for me, and most vendors seemed to be packing up when we got there around 11.  But I found one guy with some sport stuff mixed in with an otherwise random assortment of household stuff.  But nothing was priced!  My one pet peeve.  I was about to move on to the next table when Kate told me to come look at something. 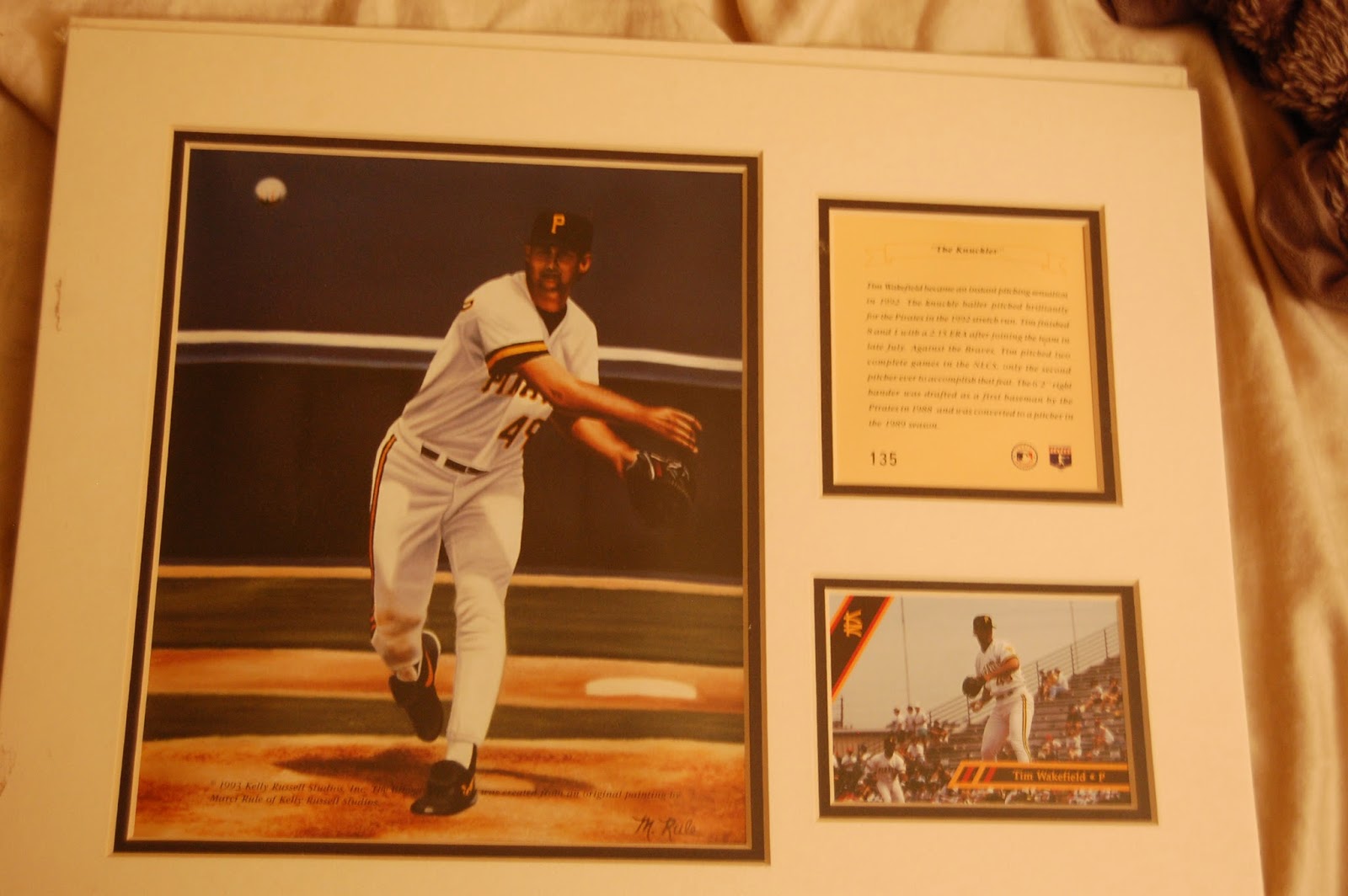 I had no clue what I was looking at, but I knew it looked cool.  They were some kind of matted lithograph, featuring some pretty nice artwork.  And complete with serial numbered coa, since in the early 90's the best way to make things seem official was apparently a number and piece of paper. 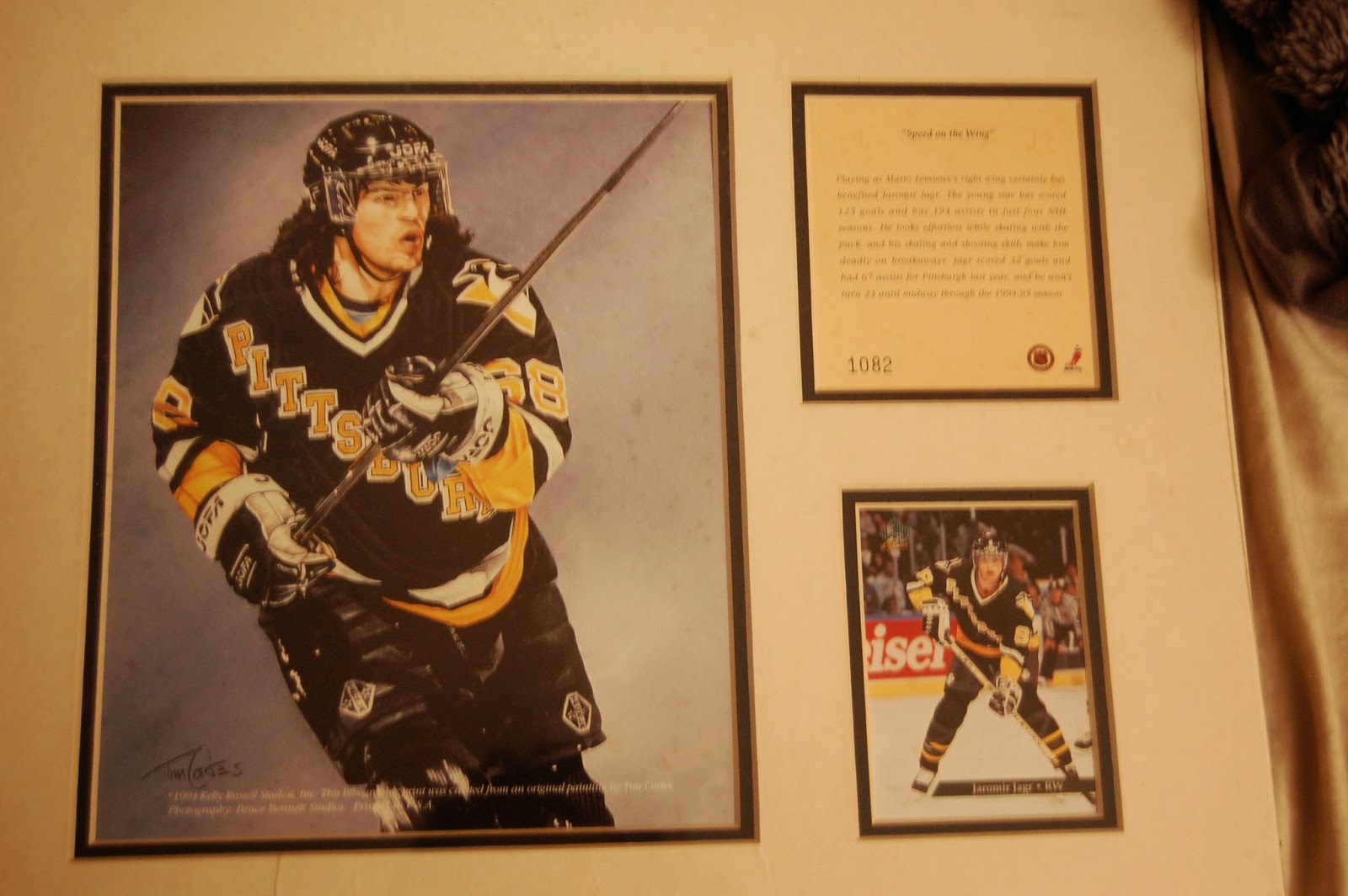 In all there were three different lithos:  Jay Bell. Tim Wakefield, and Jaromir Jagr.  The trio ran me a grand total of $5.  Whatever they were, they were definitely worth that price.

A little digging upon returning home unearthed they are from a series of Kelly Russell lithography produced throughout the mid to late 90's.  I have seen some of the more popular ones, including Jr and Ripken, somewhere - maybe a card shop in the 90's?  But there doesn't seem to be any complete checklist to be found online, and the Bell and Wakefield pieces are presumably some of the earlier pieces.  A few quick searches didn't unearth any other copies, though they say there are 10,000 of each piece.  Either way, they come pre-matted, and are perfect to stick in a frame as soon as I can pick up the right size.  Bam, instant art. 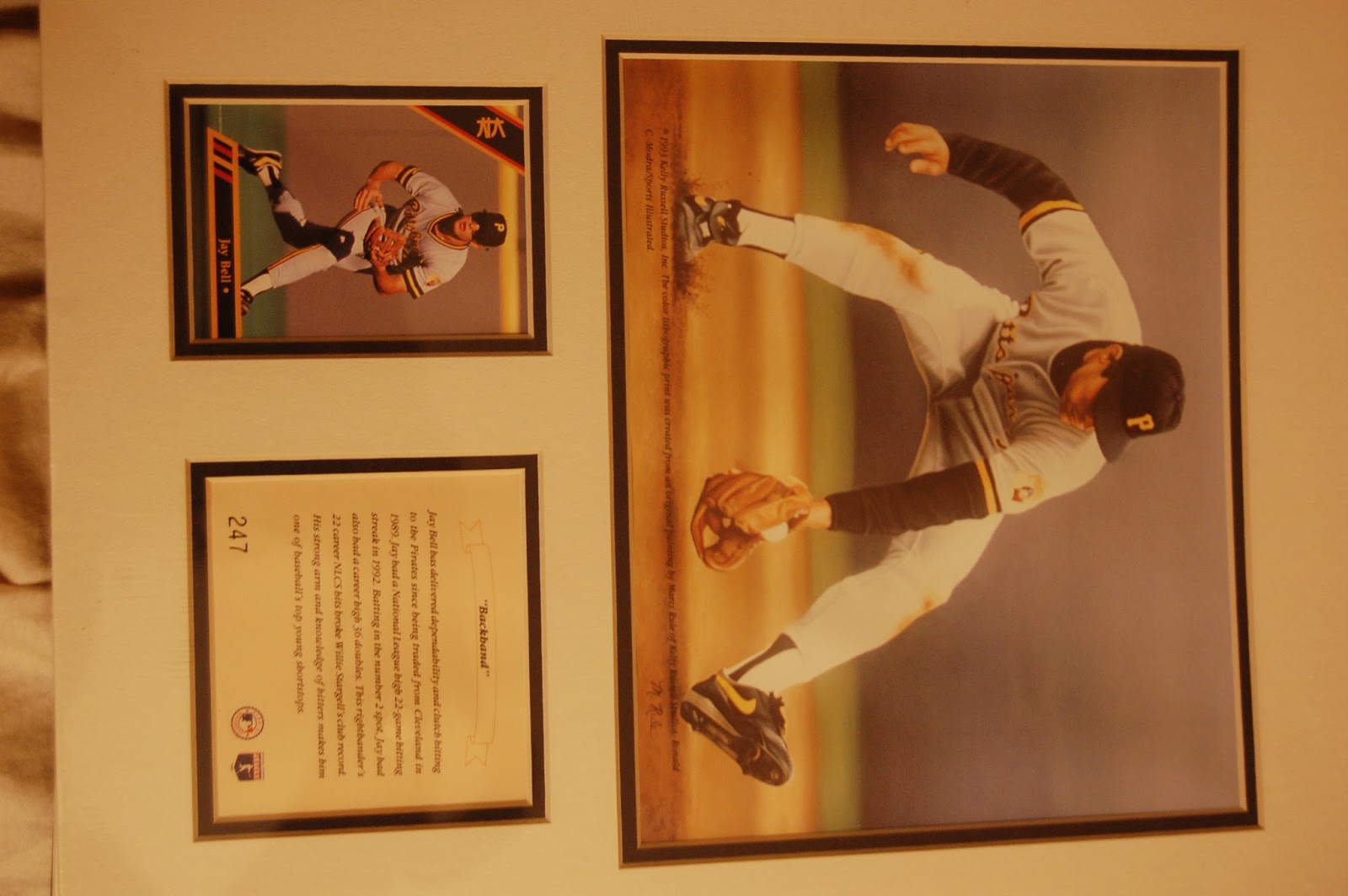 The rest of the flea market was a bust, so I doubled back to the same dealer, and asked about a signed baseball he had.  For another $3, I picked up what looks like a BP ball with 6 signatures. 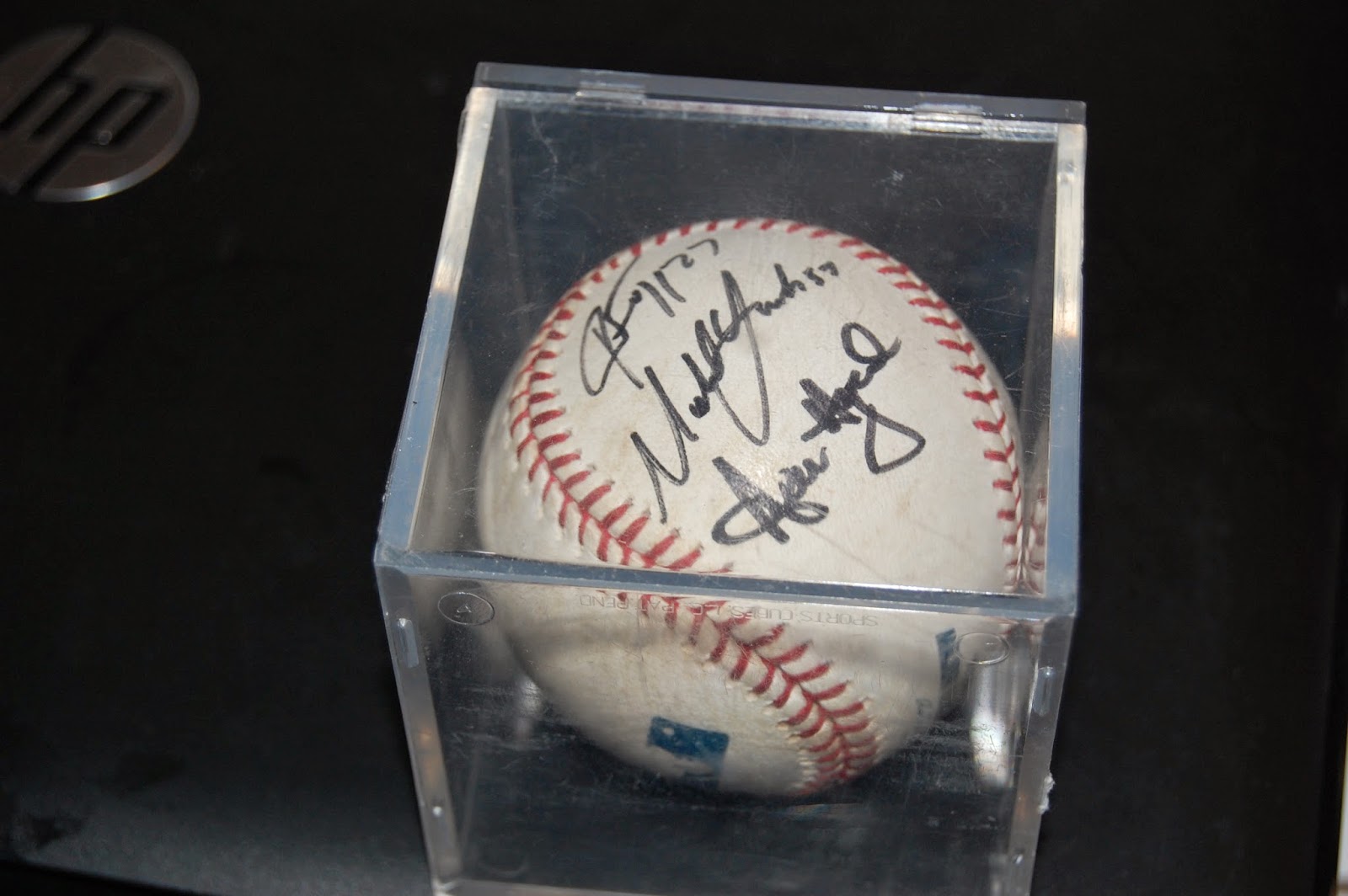 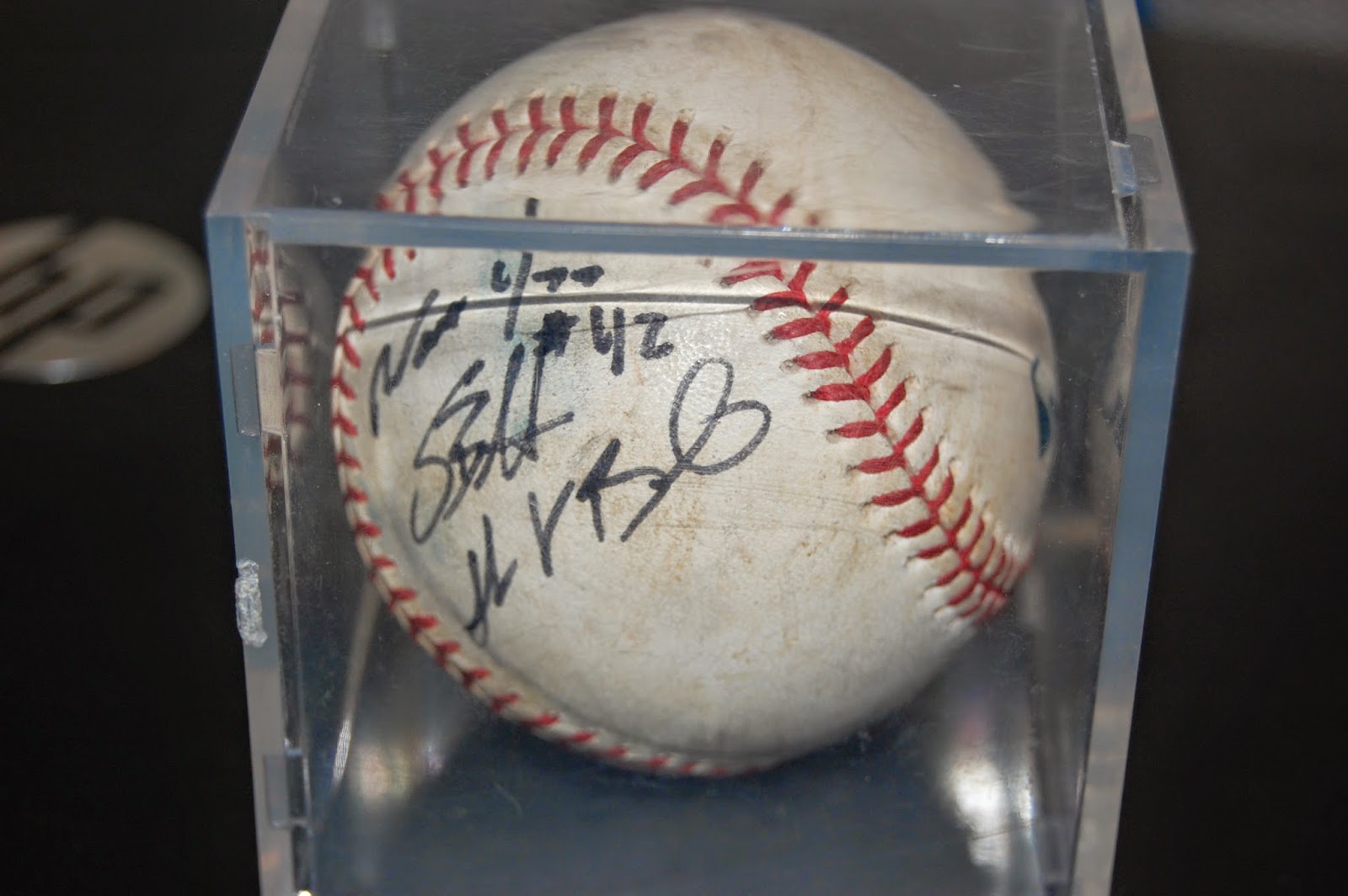 I'm not sure exactly where or when this ball came from - Hyzdu and Young were gone from the Pirates organization in 2004 when Burnett, Johnston, and Burnett all made their major league debuts.  Fogg made a couple rehab starts at AAA in 2003, but Burnett spent the year at AA, Young didn't play a game above A ball.  It could be from 2003 Spring Training, when all the players but Van Benschoten, a recent #1 pick, were on the major league roster to start ST.  It's possible he came up to get an inning or two in a split squad game, but the internet doesn't seem to have much info on 2004 these days.  Eithe way, it's a ball showing very nice scuff marks and some nice signatures from a not so great era of Bucs history.
Posted by Mark at 8:48 PM