The last year plus has been a bit a hobby dead zone for me.  But even though I haven't added a lot of new cards, that doesn't mean there haven't been some major cardboard developments.  I've managed to move the large majority of my PC to binders.  It's been a lot more enjoyable (and fewer card avalanches) now that I can grab a binder off the shelf and flip through my cards. 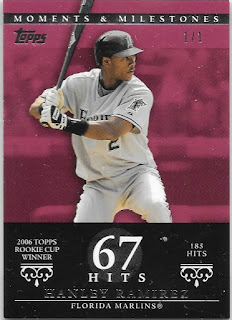 I'll be posting a walk-through of what that means for my team collections later next week.  But it's also trickled down to the random miscellaneous dimebox finds that I've accumulated over the year.  Cards are in binders by team, so I'll be pulling out one binder page on occasion and showing off some of the less heralded gems of my collection.

So what better way to get started than my second favorite team, the Miami Florida Marlins.  Let's see what this page has to offer.

Leading off is one of my favorite non-Pirate cards in my collection.  Topps Moments & Milestones took the oversaturation of numbered cards to a new level.  1/1's were so common they fall every other box.  But this card is special to me because it was pulled a couple summers ago when I got together with some of my team collector buddies in Baltimore.  Since we don't have a Marlins collector, Hanley headed back to Pittsburgh with me, and is a special memory. 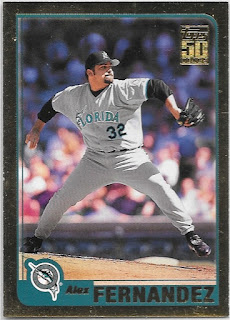 2001 was the first year the now over-done Topps Gold parallel.  At the time, I loved the idea.  Nearly two decades later, I've about had enough. 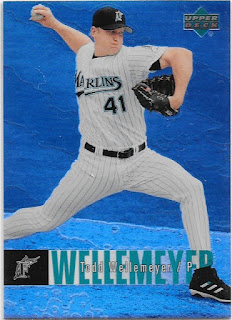 But one set that there wasn't nearly enough of was Upper Deck's Special F/X set.  The set was released in 2006 to compete with Chrome.  It was a total flop, but visually I love these cards and would gladly take them over Chrome refractors any day.  The blue parallels are unnumbered, but supposedly limited to 25 copies. 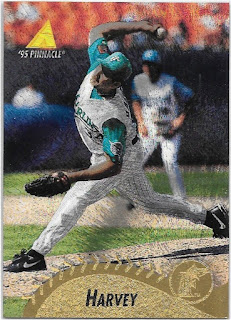 Similarly, defux technology doesn't get the love it deserves in the hobby.  It had a nice run with Pinnacle sets in the early-mid 90's, but revivals with 2005 Zenith and 2013 Pinnacle weren't as successful.  But boy do the colors pop on these cards. 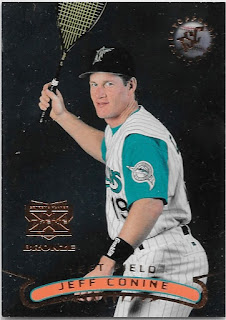 I think the first thing that drew me to the Marlins was the color scheme.  Teal and black really helped the team stand out.  I largely lost interest in the team when they switched up the logo, name, color scheme, and just about everything else a few years ago.  Still, it's disappointing to see a team that has already been smacked around for decades take a few more knocks from the new Jeter ownership group.  As a Pirate fan I can relate. 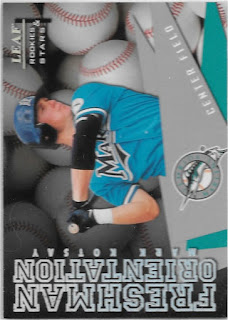 But boy, I didn't think it could get much worse than Jeff Loria. 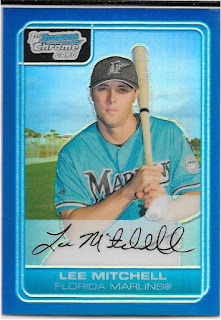 I have no idea who Lee Mitchell is.  Google says he was a decent power hitter who reached AAA.  But I'm more in love with the fact that Topps clearly photoshopped a jersey onto him that hadn't been worn by the Marlins in any capacity in probably a decade.  And hey, I do love blue refractors.  Maybe not quiiiiite binder worthy, but it's a sharp looking card. 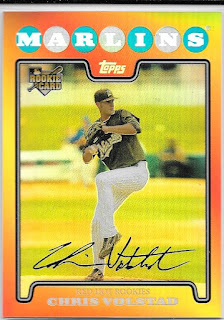 Short term stop Pirate Chris Volstad also mades an appearance on this page.  He spent all of two innings as a Buc.  But in 2008 he was a hot prospect rookie in Topps Red Hot Rookie redemption program.  I'm a big fan of the gradient on the card border. 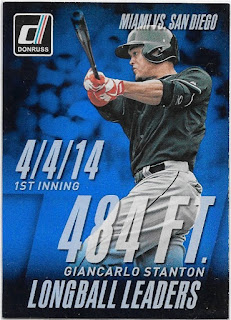 And of course there is one appearance from the recently traded Giancarlo Stanton.  I think this is the only Miami card in the binder, but made the cut because I love the revival of the old school Longball Leaders insert.  And damn, that is one long home run.