Getting Back Into My Flea Market Groove 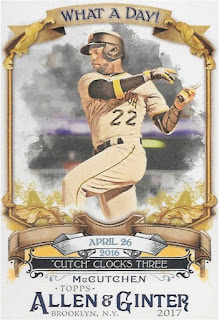 A few years back, I had been in a nice rhythm.  We were stopping at local flea markets pretty much every weekend, which was a great way to bolster the collection.  But since buying the house and moving closer to the city, weekends have been eaten up by yard work, house projects, and seeing friends.  I think we went to two flea markets last year, which was a total that we would occasionally match in a weekend in previous years.

But as I've hopped back into collecting, I realized I'm woefully behind on 2016 and 2017 releases.  And there's no better place to fill in team sets than an indoor flea market about 25 minutes away.  It's an movie theater that opened in the early 2000's that closed a few years later and then was turned into a flea market.  In the summer, they have vendors set up in the back parking lot.  But year round, there are permanent stands in the atrium, hallways, and what used to be the theaters.  And there's a card guy there that can always be relied on to have some Pirates, Steelers, and Penguin dime boxes that have cards from recent releases. 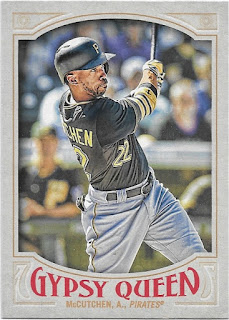 And this trip was no exception.  McCutchen cards have always been hard to come by, so it's always a plus to knock some of those off my list. 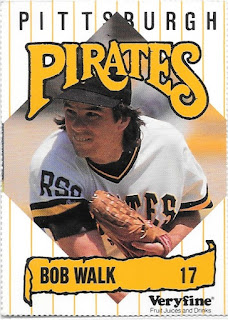 I posted a custom rendition of these 1989 Very Fine Juice cards earlier in the month.  But I found a couple of the real deals in the boxes, which I'll hopefully be able to get signed at some point. 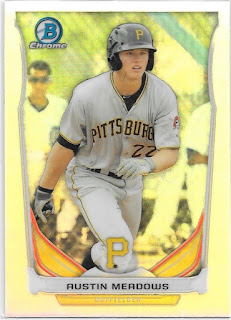 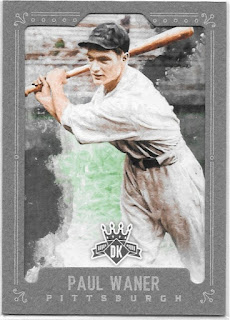 While the dime boxes are mostly base cards, I occasionally come across some low end inserts and parallels.  Nothing earth shattering, but a nice surprise.  As Bowman has cranked up the print run and checklist, refractors have gone from cards I absolutely love to a real pain.  They're tough to find at shows in this area, but too darn common to justify spending $.50-.60 per card on COMC. 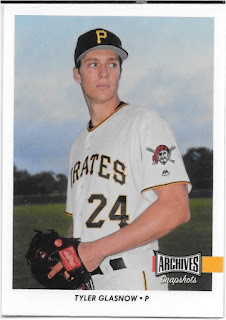 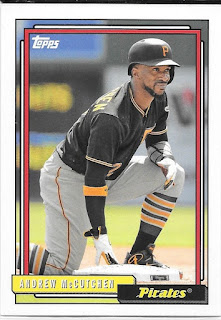 In past years, the flea market was where I would go to find the cards I didn't pull in a group break or fill in team sets.  This time, it was where I went to figure out what the heck was released over the last year.  I'm always a fan of Archives, but it's nice to see the '92 design getting some love.  It's an underrated design in that middle era where production was still relatively high but inserts and parallels were starting to gain the hobby's focus. 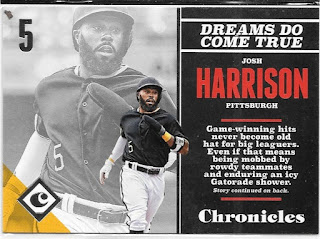 I was able to figure out what set most of the cards were from pretty easily, since Topps isn't known for their creativity in the design or naming department these days.  But this one threw me for a loop.  I at first figures it might be from Leaf or a similar offshoot.  I was a little surprised to see a Panini logo on the back when I got home.  I've been a big fan of Panini's releases since they jumped back into baseball a few years back.  But this design just looks amateur and uninspired to me.  I found the three common base cards as well as a blue parallel of Gerrit Cole, but it looks like there are some serial numbered rookies I still need to track down. 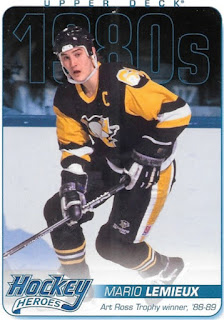 I was a little pressed for time, but I couldn't resist grabbing a few Steelers and Pens cards as well. 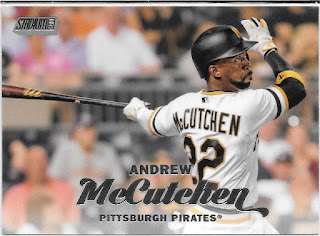 My haul wasn't as large as I might have expected, but I was still about to find about 80 new cards.  I buy from the dealer pretty regularly, and I'm probably the only customer his dime box gets so he always knocks a few bucks off.  So I could have been out the door at a cool $4.

...but what fun would that be?

I was browsing some of his other stuff.  He usually has a decent collection of bobbleheads and other SGA's.  Most of them I have, but every once in a while I find a gem.  Or in this case...a bear.

You can't see it in the photo, but underneath the arm tag is a Jack Wilson signature.  And that was enough for me to make what might be one of my oddest purchases to date.  To I'd like to introduce you to Jack, who is apparently a Build a Bear that was put together in 2005 for what was probably a lot more than the $10 I paid for it.  The bear was still in its carrying box, and didn't look like it had been loved, displayed, or any of the other things you would expect to do with a really freaking expensive teddy bear since 2005.

I have a hunch that the bear might have been signed because Jack Wilson was signing autographs at the Build a Bear store, but I couldn't find any news articles online to back that up.  Either way, I now need to figure out what to do with a large stuffed bear wearing a Pirates uniform.  The struggles of being a player collector, I suppose.

It was a lot of fun getting back to uncovering some hidden gems at the flea market.  I'm excited for the weather to start to warm up and to make it a more regular outing again this summer.