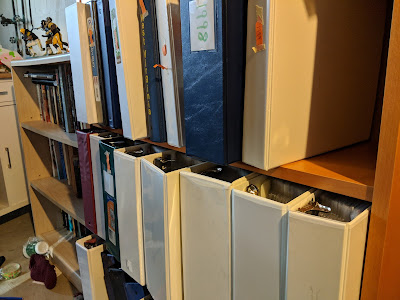 When we bought our first home in the spring of 2016, I had it all laid out.  The grand plan for my basement, which would become the permanent home to Mark's Pirate Museum and Other Assorted Stuff.

And as anyone who has bought a house knows, it never quite works out that way.  Car repairs, re-landscaping the yard, and getting a tractor to cut the 3/4 of an acre of grass I get to deal with meant that the fun projects got moved to the back burner.

Our move coincided with my break from blogging.  So I'm back, and a year and a half later can say that I'm at least closer to being moved in.  So I wanted to give you a tour of my collection setup.  It's not what the finished product will look like, but it sure beats all the boxes most of this stuff has been living in for the better part of the past decade. 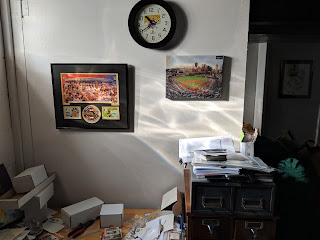 Probably the most exciting collection-related development of owning a house?  Space!  Card sorting had always been done in the worse places possible - on the floor, or a computer desk, or the kitchen table.  Somewhere that was going to be needed for something else sooner than later.  So with the added square footage came the chance to have a dedicated card sorting table. 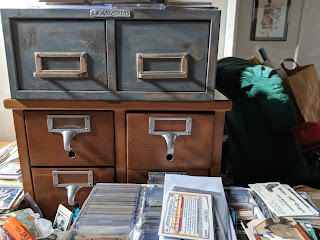 We do a lot of estate sale and flea market hunting.  One of the most useful pickups I've ever made was this set of library card catalogue drawers.  They're the perfect size for cards, and have an adjustable stop in the back that can be moved.  It's been great for dividing up cards - one drawer for Pirates that need logged in Excel, one for Steelers and Pens that need migrated to binders, one for future TTM autograph requests, and the others filled up as needed. 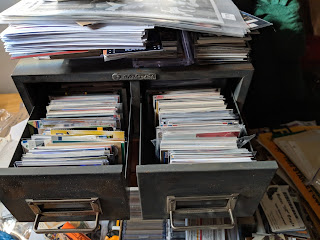 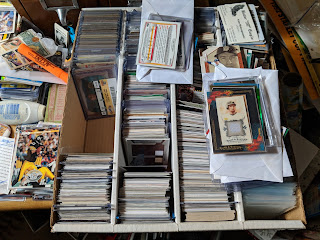 As for the sorting?  It's getting there.  I have roughly 18,000 unique Pirate cards.  That was a lot of 9 pocket pages!  It's been a long process, moving everything to binders that are organized by year and set.  But the light at the end of the tunnel is closing in.  I'm down to one row (one row!) of Pirate cards that still need to find their home in a binder.  That's a big improvement from the 3 or 4 four row boxes that I started with.

Only the far left row is Pirate cards.  The stack at the back of the row are oversized early 50's cards - Topps and Bowman - that don't fit in the standard 9 pocket pages.  At some point I'll need to get some of the oversized pages for those.  The group in the front of the row are the last cards that need moved to paged. 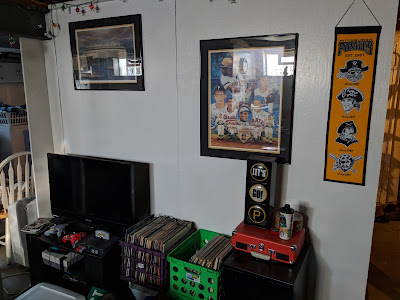 Off to the right of my card sorting setup is my basement entertainment setup.  Or more accurately, where I watch football when the living room tv is already claimed.  Without drywall, most of my memorabilia and posters are still waiting patiently to be displayed.  But I was able to find space for a few of the pieces in my collection.  The tv is hooked up to a PS2, N64, and SNES.  I'm not a big video game person, but it's fun to play a classic game every once in a while or when we have friends over.  I also have my small vinyl collection down here as well. 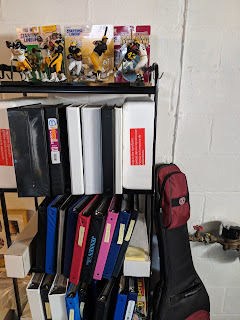 I've migrated the majority of my PC to binders over the last few years, including my autograph collection, player collections, and random cards that caught my eye.  All that dime box digging adds up fast. 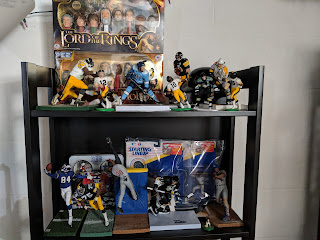 I've built up a pretty sizable collection of McFarlane figures over the years.  While some players, like Cadillac Williams or Jason Giambi may not have quite the luster they did when I first bought their figures, I have most of the Steelers figures that were released and some of my all-time favorites.  A lot are still boxed up until drywall goes up, but I managed to find room for at least some of my favorites. 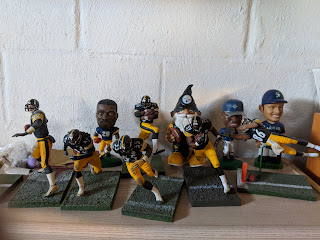 It's not perfect yet, but it's been great to have a space where I can enjoy most of my collection.  There are still boxes of bobbleheads, memorabilia, and plenty of posters that I haven't had the space to put out right now.  Nothing beats being able to come home and flip through cards for a while watching tv or putting a record on to wind down after a long day at work.