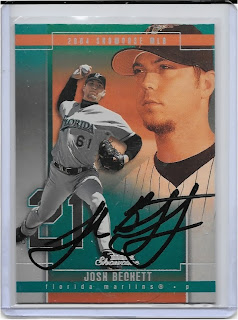 One of the things that really interests me about the hobby is the ebb and flow of hobby interest in certain players.  I've always shied away from paying market prices for just about...anything...when it first comes out.  I waited years to jump on  the flatscreen bandwagon.  I didn't buy a PS3 until the third or 4th wave of price drops.  Call me cheap (my darling bride certainly does).  Call me frugal.  Call me as you will.  I'm a bargain hunter - though not the the slightly obsessive, checking every flyer and coupon and spending my time on supermarket floors checking for dented cans ala the egg guy in Clerks.

Nah, I'm just a guy who likes getting the most milage out of my buck.  Which makes card collecting an interesting endeavor.

You see, it seems that many collectors have short memories.  Yesterday's star is today's quarter box find.  Sure, some of the upper tier superstars maintain a strong collector base well after their retirement.  But that second tier of guys?  They get forgotten about pretty fast.

As a Pirate collector, it's allowed me to put together some pretty nice collections of guys like Brian Giles and Jason Kendall over the past few years.  And I imagine Jason Bay will be added to that list pretty soon.

And it looks like that trickle down theory is making its way over to the autograph side of my collection too.  I was browsing for Pirate autos a few weeks ago when I came across a seller who had a few listings pop up.  I decided to check out his other auctions, and boy was I surprised.

It looked like the guy was a Boston autograph dealer, with a bunch of autographs listed from many of the bigger name players over the last decade or two. 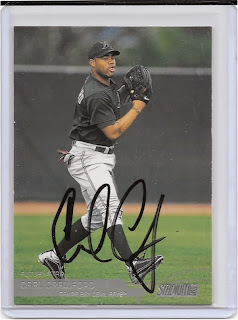 I got outbid on some of the players I was after - Mo Vaughn, Curt Schilling, Tom Glavine.  The prices were good, but I have been overspending lately, so I let a few slip through my fingers at great prices.  Bad timing, I guess.  But I was able to snag these two for a mere $1 each, plus free shipping.

Beckett and Crawford have certainly seen their stock fall in recent seasons.  And perhaps the fact that both cards are in uniforms of the Florida teams that get almost no hobby love helped.  But for two guys still currently playing, I was pretty surprised to see their cards nearly end without a single bid.

Cross two more guys off the "players I'd love to have an auto of, but will never pay more than $3 for" list!
Posted by Mark at 10:59 AM