And We Can't Stop (The Group Breaks), And We Won't Stop 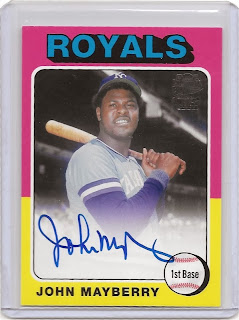 The group break insanity continues at Battlin Bucs.  And in case you were wondering, yes, I'm aware the cards in this post are in fact not Pirates cards.

This latest group break came from a group of team collectors I'm involved with.  We used to have a collector for every team, but as time goes by it's been pretty tough to replace lost members with quality participants.  The end result?  We were only able to cover 15 slots in the break, meaning everybody got a second team.

The ever faithful random.org spit the Royals out my way.  Not my preferred choice, but I'm glad I didn't try to swap them for another team.

The break consisted almost entirely of 2013 products - Update, Chrome, Gypsy Queen - with a box of 2012 Opening Day thrown in for kicks.

The Royals slot was actually the lesser of the two teams, so I'll be back with the Pirates half later today.  Hint: there will be natural elements involved.  It's safe to say I absolutely killed the break - sorry guys!

The Mayberry auto is a keeper.  I think I sent a TTM request to him around 2004 or 2005 that was never heard from again, so I consider this some kind of karma.  I know the Archives product has been pretty weak since it came back, but I do want to add some of the autos on the secondary market one of these days.  The other auto out of the first box of Archives was Larry Bowa - a guy I have about a dozen TTM autos of.  Dodged a bullet there. The blogosphere goes nuts over update, and rightfully so.  It's always a safe bet for some fun or quirky cards of less than superstar names.  Miguel Tejada managed to resurrect his career for a brief time before a PED suspension.  I doubt many will remember the former A's MVP in another city the Athletics used to play in. 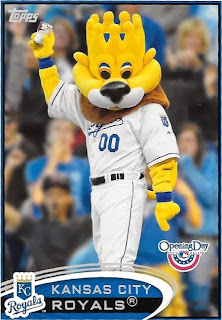 Opening Day is far from an exciting product.  Or at least it was until 2013, when Topps really stepped it up and added some awesome inserts.  But these mascot cards take the cake as far as I'm concerned.  Who knew the Royals had a mascot?  More importantly...what the hell is that thing? 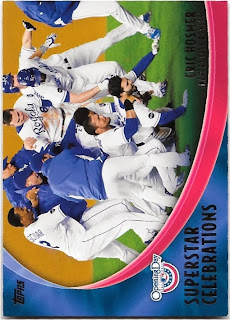 Insert, yes.  Celebration?  Debatable.  It looks more like a photo from a bench clearing brawl than a walkoff celebration. 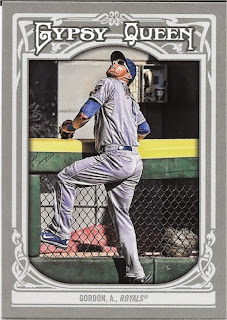 The photos in Gypsy Queen were among the highlights this year for me.  There are some absolutely amazing photos, only slightly ruined by the awkward photoshop effects.  I wonder if this one was initially an option to be in the Flagship Out of Bounds SP series? 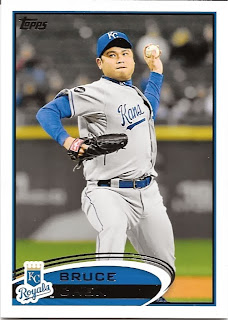 Bruce Chen is still a major league pitcher.  Anybody who followed baseball around the turn of the century should be absolutely amazed by that fact.  This one is binder hall of fame worthy. 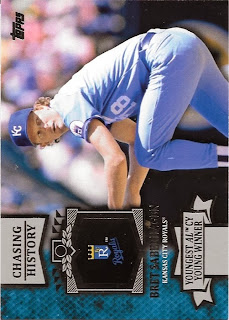 The Chasing History inserts are among my favorite in recent years.  But this was far from the best Saberhagen card of the break.  I also pulled a redemption for an Archives auto.  There are some live copies on ebay, so I'm pretty confident I'll be seeing the card in the near future.  Of the two boxes of Archives, I pulled two of the three autos (the second box was short an auto - thanks Topps!).  Oops. 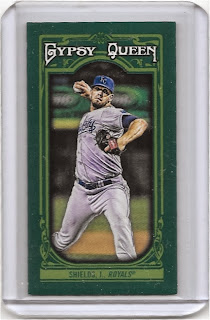 Amazingly I didn't pull a single base mini of the Royals or Pirates.  But I did manage to hit two numbered minis.  This green James Shields is a cool card, but it'll probably be looking for a good home soon.

So there ya have it.  Some fun new cards for the Royals binder, and a couple of awesome new autos for the collection.  Pretty nice start, so the Bucs slot will have a tough act to follow.
Posted by Mark at 9:49 AM