A few weeks ago Baseball Dad commented on an oddball Nolan Ryan prototype I posted.  I ended up with a stack of various players in a lot I picked up a few years back, and was thrilled to find a good home for one to decrease the pile ever so slightly.  I threw in a few other Tribe cards, because single card packages look pretty lonely.

I found out that we didn't live all that far apart when I was living in Lima.  And by not that far apart, I mean that in western Ohio, the smallest towns and villages are 30 miles apart, and the roads get such esteemed and thoughtful names as County Road 371, or Bluffton Road, which would, amazingly, go to Bluffton, Ohio.  So we were practically neighbors, and I wouldn't be surprised if our paths crossed at some point at one of the many card shows in the area.

While I was just happy to give some cards a good home, I certainly couldn't complain when a PWE arrived last week with some fantastic Pirate cards. 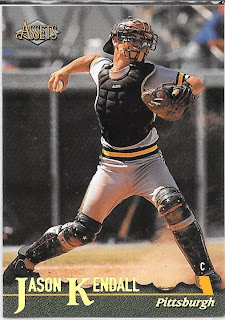 Jason Kendall is one of those guys whose early career greatness is overshadowed by a lengthy career that just sort of...exists.  Kendall was a perennial all-star for the Bucs (admittedly not a tough task for most of the 90's when there were really no other deserving candidates on the team).  But his time in Oakland, Chicago, Milwaukee, and Kansas City after leaving the Burgh were far less memorable.  Still, this card is an awesome minor league issue I've never seen before. 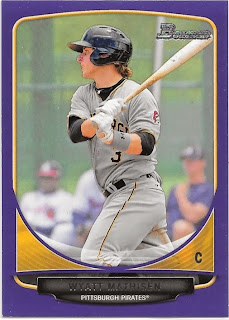 Speaking of the minors, I'm a little irritated with Topps' parallel-a-palooza the last few years.  The Bowman Toys R Us Purple parallel is just one more headache to chase.  Toys R Us?  Really? 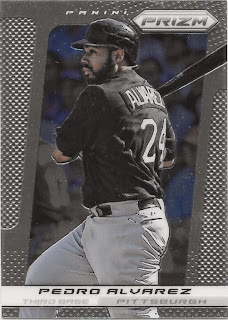 As my anger with Topps grows, I've become increasingly appreciative of Panini's releases.  I know many aren't for one reason or another.  Well, two reasons, really.  No logos.  Boxes that don't come close to delivering their SRP value.  No logos.

But I like 'em.  But with the limited number of parallels that I'm seeing listed, I imagine there is a ton of unopened Panini product these days. 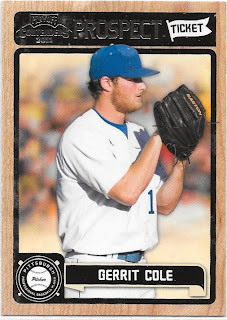 And now we have our MVP of the PWE.  Gerrit Cole cards in my collection are few and far between right now.  I think I have his base Bowman and possible a Chrome rookie, and one of his cards from Topps Heritage.  So I guess my Cole Train just added another car.

There was one last addition to my collection in the PWE, but it deserves its own post.  This package was a ton of fun to open, and I'm sure we'll have to strike up a bigger trade in the near future.  I had been stockpiling Indians, Reds, and Tigers cards in preparation to do a show right before we moved out of Ohio, and I'm getting really sick of finding stacks of Victor Martinez parallels in my card boxes.
Posted by Mark at 10:31 AM