Catching Up on the Mail, Part 1

As a kid, I was raised on some combination of cartoons, Nickelodeon cinematic brilliance like Pete and Pete and Keenan and Kell, and PBS programming.  The results were, I like to think, fairly positive.  The programs I grew up on felt real, and tackled issues that I may have been slightly oblivious to at age 6 or 7, but watching the shows now I realized left an imprint on me when they mirrored my life 5 or 10 years later.

Mister Rogers' Neighborhood held a special place in my heart now and then; Fred Rogers grew up about 30 mins away from where I lived, and the Pittsburgh centric episodes made me assume that the show was made just for me.  Probably my favorite character on the program was Mr. McFeely, the mailman.  He was just a warm character that always brought some piece of news or interesting information on his visits.

Our own mailman may not have been quite so exciting, but the mail was always something that excited me as a young kid.  You know, back when people actually used to send letters.  Or postcards.  Or anything more personal than a hastily typed email expunging any attempts at proper capitalization or punctuation.  But I digress.

In 2004, I started sending out requests for autographs through the mail after reading a thread about it on the now un-readable Beckett message boards (remember when Beckett was actually relevant?).  Suddenly the mail took on an entire new significance - each daily arrival could hold a new surprise inside an envelope.  Would it be the HoF'er I just mailed to, or some up and coming prospect in AA?

I don't mail as many requests as I used to, but the daily trip to the mail box is still a point of excitement, hoping for packages from ebay, group break shipments, or some mail from other bloggers.

Which I guess is the long way to say I'm pretty far behind on incoming mail from last month.  I'm going to make an effort to get caught up today, to check back for a few more posts on the exciting additions that have made their way into my mailbox recently.

I'm leading off with a package from my good buddy Mike at Tromps Sport Cards.  He updates his site pretty much daily, and has great prices on his cards. 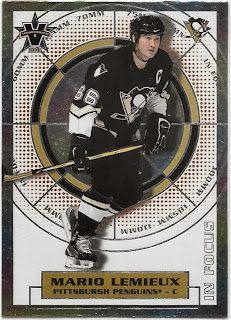 I picked up a few Pirate cards I needed, and threw in some other Pens and Steelers cards.  But the Pens cards stole the show.  My hockey collection is sadly lagging behind the other sports, but this package added some nice star power.  And shiny! 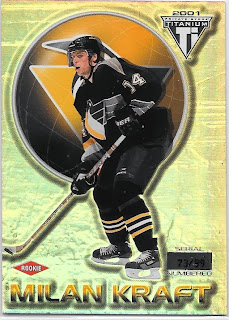 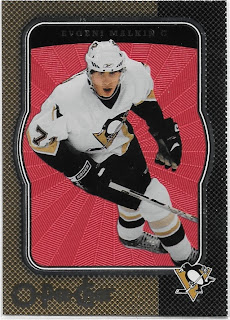 Call me shallow, but one of my favorite aspects of my growing Steelers and Pens collections are that there are so many products in those sports that never had a baseball counterpart.  When I collected baseball and football in the 90's, it was usually safe to say that most products released in one sports would come out in the other.  Most manufacturers had licenses in multiple sports, and the products usually translated well.

With the Topps monopoly running full steam towards boredom and repetition year after year, it's been really refreshing for my collection to see some of the unique cards in other sports.  I don't know what this Malkin card on the right is, but the ruby background looks great in person, and the card has some kind of weird perforation on the right edge (I assume intentionally). 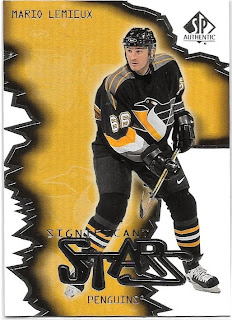 The other thing I like?  Star power.  Well, kind of.  On the hockey side, guys like Lemieux, Crobsy, and Malkin have mostly priced themselves out of my ballpark.  I add a few cards here and there, mostly of the dime variety, but even their mid range inserts are usually more expensive than I want to pay for what is really my third or fourth tier collection.

But what do I really love about my new collecting interests? 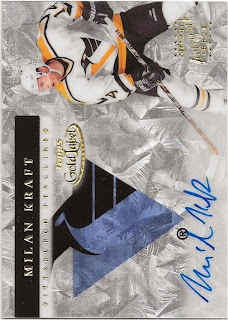 Jerseys!  Or I guess they're sweaters in hockey.  The Pens have a pretty fun uniform history - and for someone who likes pretty jerseys, that's a major plus.  This Gold Label Milan Kraft auto had been on I had been on the hunt for pretty much since I started collecting hockey last year.  It looks amazing in person, and is a beautiful on card signature.  The ice pattern in the background is one of the more impressive things I've seen on cardboard.  And of course a level of effort Topps wouldn't dare consider today.

I'll be back later today with some baseball pickups, and of course the obligatory Sunday Steelers additions.  But in the mean time, perhaps it's time for me to go turn my attention to hockey as the season gets under way.

Email ThisBlogThis!Share to TwitterShare to FacebookShare to Pinterest
Labels: Penguins