I don't always do group breaks, but when I do...

It seems like group breaks are all the rage these days (group breaks are the new midnight blaster run?). I've been hesitant to jump in on most.  After all, I can just pick up singles for far less than the average buy in for a case break, and be guaranteed to get cards I want and don't have.  With a group break, the high end potential is there, but the chance of tossing money down the drain is pretty high as well.

But some deals are just too good to pass up.  As anyone who has read a single post here probably knows, I love the 90's.  So when a massive 30+ box 90's break was proposed on a forum, I was all ears.  I had done a similar break a few months back (which I still need to post...doh), and hit the motherload.  When the break was expanded to 70 boxes for a little more than the cost of blaster, I couldn't get that paypal screen up fast enough. 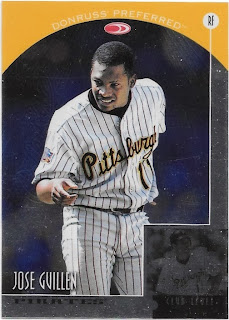 The break was a perfect fit for me.  I pretty much stopped collecting in 1998 and 1999. Even though I have filled some holes from those years, my commons needs alone made the break a worthwhile investment for me.  Anything beyond that was just icing on the cake.

And this cake ended up well iced. 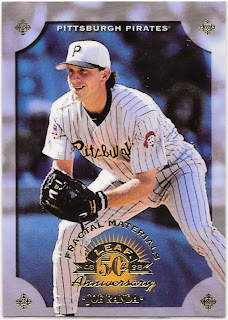 The break had a pretty broad range of boxes, including a few top end boxes.  Nearly twenty years later, it's no small task to come across unopened wax from some of these products.  Some products that were widespread and had investor appeal, like Bowman, seem to be easy to come by.  But 1998 Leaf Fractal Foundations?  Not so much.  The product was pretty limited (for the time) to begin with.  And the cards are big holes in my collection these days.  Same goes for 1998 Donruss Collections, from which the Jose Guillen above hails, which were basically chrome and refractor versions of the primary Donruss sets released that year.  Donruss would be out of baseball later that year, but they put out some interesting products on the way out.

If you're not familiar with the products, I suggest a google search and preparing a flow chart.  They're some doozies.

But of course not all the products can be those upper tier boxes.  The price and rarity makes it tough enough, so many of the boxes were lower end product.  But that's fine by me, since the 90's were great for 1 per pack parallels that leave big, gaping holes in my binder pages. 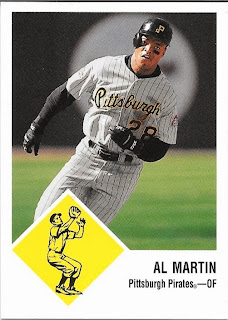 Like these great '63 Throwback designs from the 1998 Fleer Tradition set.  Fleer would later use the design for their base Tradition set in 2003, but I'm preferential to the parallel version.

There was enough 1998 Bowman (I believe 7 boxes between Series 1, 2, and Chrome) that I hope I don't see any more in my lifetime - though I stilllll have some holes in the International parallel set.  But 2000 Bowman and Chrome were welcomed sights.  The Bucs slot largely struck out on the Bowman boxes, but I did come away with a beauty from 2000 BC's Retro/Future parallel.  It's still one of my favorite parallel sets. 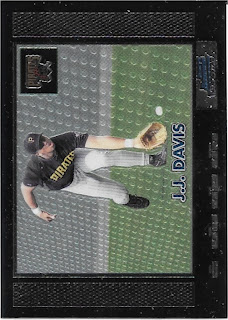 One of my favorite aspects about a break this size is that there is something for everybody.  Some of the more expensive slots may have been disappointed.  But on the whole the break hit some bigtime cards.

But of course one of the biggest perks of participating in a group break is the break itself.  The break was streamed live across two nights, and was a great learning experience.  For example, I now know that telling Kate I'm too busy to do thing X because I'm watching a man open boxes of baseball cards on the computer is probably not a good choice.  It's also about as interesting as watching paint dry when the boxes are from the 90's, where a card numbered out of 3000 may be the hit of the box. 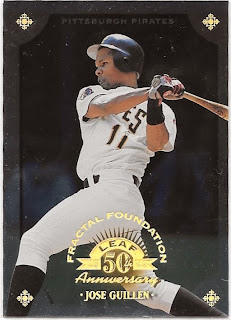 Speaking of hits, they come in all forms during a break.  Sure, there were some big hits.  And a few big dollar cards came out (though never in black and gold).  But as I said, it was the smaller joys, like half a dozen of 90's Pacific product that is nearly nonexistent in my collection, that made the break for me. 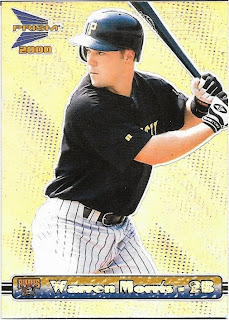 The flat rate box that came in yesterday had nearly 400 cards.  Sorting through all of them was a relatively painless process, since I knew which products in the break were my biggest needs and which I probably already had a good deal of the cards.  Some of the boxes were also repeats from the previous 90's break, so I knew those sets were probably already completed.  All told, I added about 160 new cards to the collection.  Not much more than a dime a card.  And considering that many of those were inserts or parallels, not bad at all.

The break yielded some fun cards that I just wouldn't be able to come by with ease otherwise. 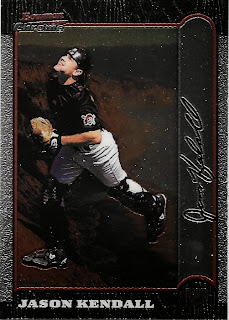 It didn't scan well, but this 1999 Bowman Chrome International parallel of Jason Kendall features an awesome California seascape in the background.  And while not a super rare hit, it's also the kind of card that isn't quite rare or valuable enough to make it into a show box or ebay.  Yet hard enough to find that it's not just sitting on sportlots.

Oh, I had been promising hits, hadn't I? 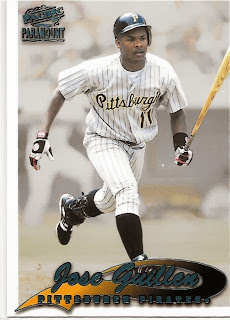 Again the scan leave something to be desired, but this Paramount Platinum Blue parallel falls 1:67 packs.  Not a bad pull, if I do say so myself.

But the monsters of the break... 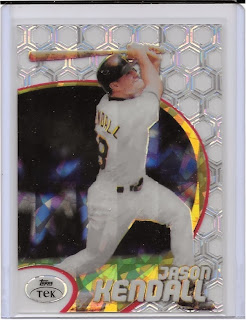 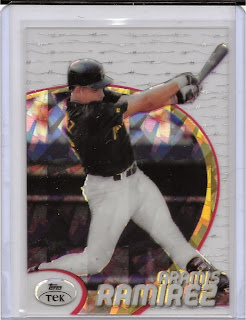 For the uninitiated, these beauties are 1998 Topps Tek Diffractors.  If that means nothing to you, these are basically the old school Atomic Refractor design on acetate cards.  But there's a catch.  Each player has 90 different patterns.  And the cards came in packs of 4 that carried an astonishingly high price tag of $4 or $5 a pack, which was insane for the time.

The Tek base set alone is an almost insurmountable task.  I think I have 3 or 4 patterns of each player.  But the Diffractors?  They fall about 2 per box on average.  Completing all 90 patterns for one player would be a jawdropping accomplishment.

These cards both came out of the box that was the highlight of the break.  A Diffractor hot box that yielded I believe 8 or 9 Diffractors in the box.  Talk about killing the odds.  If I wanted to sell them, these two would probably just about pay for my slot.  But I couldn't dare let such amazing cards leave my collection.

But the breakin' fun isn't over yet.  I went with the hot hand and bought into another, much smaller, break that just came in the mail today.  And the results were even better!