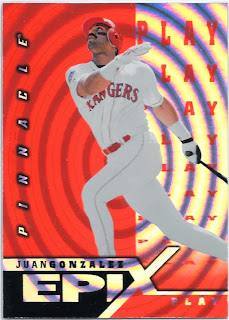 Over the last few months I've made an effort to move my Pirates collection, autographs, and other random cards I'm rather fond of into binders.  From an organizational standpoint, it has certainly made life easier.  I don't know about you, but it seems that any time I open up a box I manage to screw up whatever order may have existed in the box by the time I put the lid back on.  With binder pages, the cards are at least staying in some type of organization once I get them in there.

So now that there is some order to the chaos, I thought it would be a great time to start showing off some of the binder pages.  You've been warned: there's lots of foil goodness from the 90's, an obscene love of throwback uniforms, and way too many autographs.  I'll try not to disrupt the black and gold theme too much, but hopefully the variety is appreciated.

This page is almost exclusively Juan Gonzalez, except for one perky Pudge card that snuck in.  The Rangers were a team I liked as a kid.  Maybe it was the homers flying out left and right.  Or maybe it was the blue and red color scheme (my two favorite colors as a kid).  Or maybe the fact that a Dean Palmer Starting Lineup figure was one of my favorite toys.  Who knows. 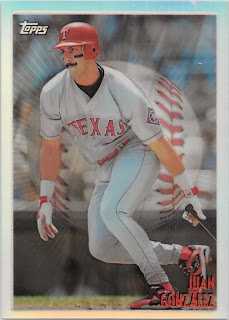 The thing that stands out about all these cards the most is the color explosion.  Foil, refractor, colored goodness is in full effect here.  To some degree I think that's the look Topps has been trying to replicate over the past few years with the Flagship set, mixing up the colors of foil.  But for me the modern cards just don't have the same appeal of gratification.  Not that I don't get excited when I see that foil shine peaking out of a pack. 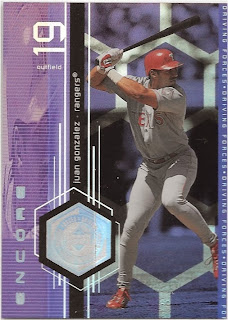 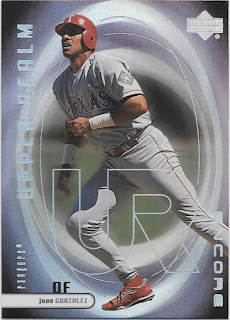 A few years back I picked up a box of Upper Deck Encore on the cheap.  I don't think I paid more than $20 or so, and the box was worth every penny. 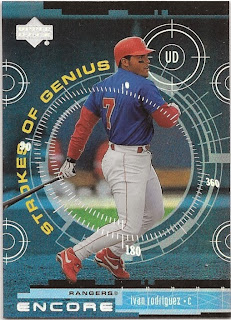 The product was absolutely loaded with inserts, all of which have a rainbow foil - refractor-ish look to them.  The designs are unique, though admittedly a little busy.  But most of all the cards are just downright fun. Speaking of fun, remember the Crash the Game inserts?  I don't think I ever hit a winner (or at least never realized if I did), but it was always fun to check box scores in the paper to see if any of my cards won.  Of course now the only reason anyone checks a box score is to see how their fantasy player did.  I think I'll be the guy screaming "Get off my lawn, you hooligans!" by age 30...

But there were still plenty of misses back then, as there are now. 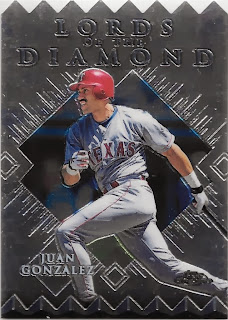 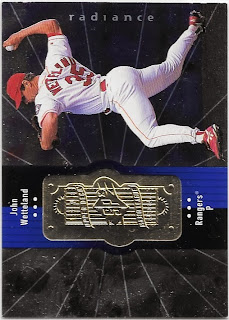 The Lords of the Diamond inserts look nice in the base set, and the refractors are great.  The Chrome version leaves something to be desired though.  Unfortunately that thing is not the ability to be used as a fully functioning knife, though.  Those points are SHARP.  And of course nothing was more fun than serial numbering every single card, right?  Right, SPx and Topps Stars?  Of course Moments & Milestones acted like that was some kind of new concept (though that set did take it to annoying new heights).

The 90's Rangers were a fun team to watch, though obviously recent versions of the club have had more success.  Still, the team is just about the only thing out of Texas I like.  So it could be worse.

My miscellaneous binders are organized by team and division, so expect to see some more AL West cards in the future.  Perhaps some Angels cards with their ever changing logo, city, and name?
Posted by Mark at 5:22 PM