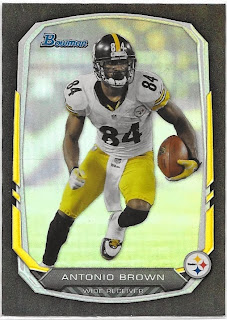 I've written before that the addition of Penguins and Steelers cards to my collecting stable has made the hobby more interesting for me.  While Pirate cards will always be my primary collection, it has been fun to see the sets that come out in other sports.

One area where that really manifests itself is in a much more subtle area than card sets, or numbering of super shiny refractors.  One thing I have noticed is how much the photography changes when you get to hockey or football cards.

Sure some of that has to do with the manufacturers (and competition *gasp*) in other sports.  But theres something else.  Baseball is about repetition.  How well can a pitcher or batter repeat their delivery or swing?  Most ground balls or fly balls are going to look pretty much the same.  In short, there are only so many ways the game will "look" aside from the exceptional event.

But the other sports?  Well, when you have somebody actively trying to stop you from doing what you are doing (catching, tackling, passing, etc) it means the body will do some interesting things. 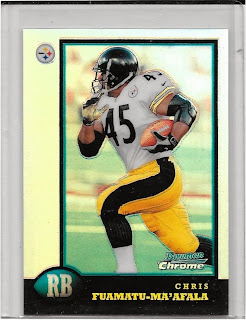 All these pickups came from a flea market trip a few weeks back.  At a dime a piece, I was able to score some nice cards that were well above and beyond you standard dime box fare.  Which of course was a welcome invitation to snag anything and everything that caught my eye.

Of course one of the other things that differentiates football is the celebrations.  While I don't disagree with the No Fun League title, it's hard to deny that most celebrations in football are more involved than most baseball ones.  Of course anything more than a fist pump after a homer will probably get you getting acquainted with a 94mph fastball your next time up.  In football, the celebrations come all to often, even on those most routine of plays. 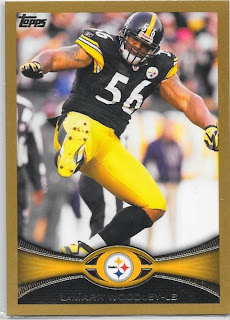 But of course it's never allllll about photos.  Hell, perhaps the best part of 90's cards was all the other stuff going on with the card.  Is Kordell Stewart standing in the middle of some kind of metal plant explosion? 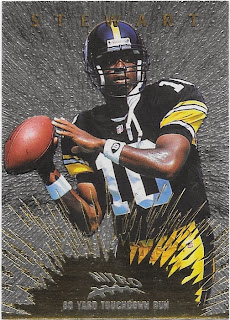 But it wasn't all bad.  This Bowman parallel took customization to the next level, including Bettis' nickname on the back licenseplate.  Sure beats the current efforts, where manufacturers don't even designate parallels and refractors anymore. 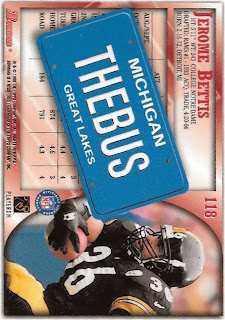 The adding legends to current sets fad has been doing on a decade plus now.  But it doesn't mean I'll get tired of seeing Rod Woodson back in black and gold. 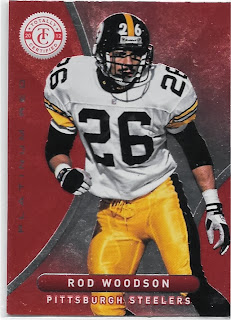 Speaking of which...this bumblebee card is just amazing.  The card is framed perfectly in the black parallel.  I may be one of the few, sick individuals who love these jerseys. 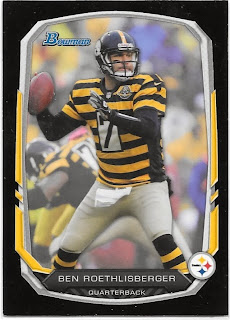 And of course who doesn't love the boomerang players, who end up back with a team after a few years away.  Plaxico Burress may be done for good after an injury in training camp, but it was nice to see him back with the Steelers for a few games last year.  Even cooler to see that memorialized on cardboard. 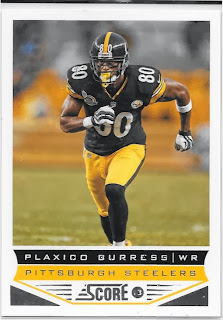 And of course you have the famous helmet seat.  It's not a pose I see too often, but I can think of at least 3 or 4 Rod Woodson cards in this exact same pose.  A Mirror Gold for a dime?  Gotta love flea markets. 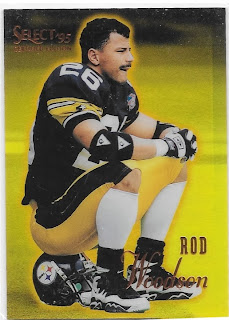