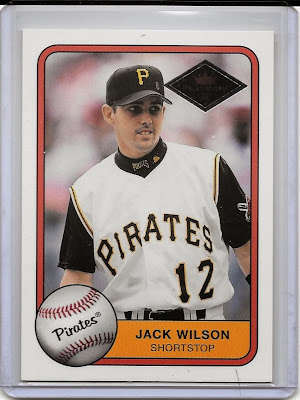 The wedding daze is wearing off a bit, and now I can finally turn my attention towards some of the mail that came in while I was a zombie.  I was going to do one megapost with all the new arrivals, but this one warrants special attention.

I've discussed how Jack Wilson's arrival in the bigs as a light hitting, slick fielding rookie coincided, and probably helped develop, my renewed interest in baseball and card collecting around 2001.  He will forever be my favorite player, and I don't think I realized just how significant that was until I have been unable to find any single player I really wanted to focus on collecting since Jack left the Bucs.

2001 was a magical year for baseball, for collectors, and for me personally (well, other than the broken arm I got that year).  With a strong rookie class, every product seemed like a can't miss.  And near the top of that list was 2001 Fleer Platinum.  As the anniversary theme was in full swing, all three major manufacturers (Pacific would be out of the game early in the year) had anniversary themed sets.  But Platinum was by far my favorite (in retrospect, breaking a few boxes of 2001 Heritage may have been the wiser decision).

One of the rough things about being a super collector of a non-star player is that the good ole supply and demand curve doesn't work too well.  The demand is...me.  The supply is...buried in $.50 boxes somewhere in Nebraska.  I'm at about 70% completion, and new additions have slowed to a trickle of 4 or 5 new cards a year.  Everything else I need is either really high numbered or really low numbered.  Either way, they don't see the light of day often.

In some cases, never.  You see, 01 Platinum had a really annoying parallel.  The cards looked exactly like the base cards, except the outline of the logo was in silver foil, and the cards were numbered on the back.  Base cards were numbered to 201, while rookies were to 21.  And the cards were so drab that I had pulled one of Tim Redding in 2001, and didn't realize it was a parallel version until 2003 or 2004.

The Wilson foil version was a card I had never seen before, and one of only a handful of 2001 RC's I don't have.

And then one landed on ebay just a couple days before the wedding.

Did I overpay?  Maybe.  But $15 is a small price to pay for a card that I had never seen before, and may very well never see again.  Now it's back to playing the waiting game to see when the next card I need will surface.
Posted by Mark at 10:40 AM