No, not the set.  We mark our collections in ways that are in many ways arbitrary, but in our own individual world views makes perfect sense.  Set builders have relatively objective, concrete goals: get every card in a specific set.  But for the rest of us?  Collecting habits differ, and I think the blogosphere is a great example of that.

A PWE from Baseball Dad last week put me at exactly 11,000 different Pirate cards according to my excel file. 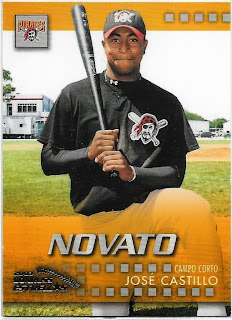 The card itself was rather pedestrian.  A 2003 Donruss Estrellas card of short lives second sacker Jose Castillo.  The card is unique in that I had no idea a 2003 Estrellas set was even released (I thought the 02 issue was a one-and-done set).  But otherwise it's...ordinary.  Not to mention it includes the same photo of Castillo Donruss recycled on about half a dozen cards between 2003 and 2004.

And in all honesty, the milestone itself is rather arbitrary.  For some reason we like nice round numbers.  And 11,000 cards is an impressive achievement.  But no less impressive than 10,999.  Or 10,964.

And even then, odds are that my excel count is off in some way, shape, or form.  Maybe a double entry of Bill Madlock's 1983 Fleer card (just checked, and we're in the clear on that one), or some 1995 Ultra common that stuck to the back of another card when I was cataloging them.

So arbitrary?  Yes.  But collecting is about the journey.  And in the past eight years, I've gone from exclusively a player collector, to trying to collect one certified autograph of every player to appear as a Pirate, to a team collector, to what would probably be described by my loving bride as an out of control super-collecting monster hell bent upon picking up every single Pirates card ever produced.  Those collecting evolutions get dropped onto the mile markers of my life over that time as I moved from high school student, wide eyed college student, grad student, dumped, dating, single, engaged, married, in shape, not so in shape.

And I think that's one of the interesting aspects of collecting.  I'm quite sure many of us can associate a specific card with a place or time in our lives when we added it to our collection.  Or a card that has special meaning as a gift from a parent, child, or partner.  Maybe not every single card.  But some of those cards take us on this weird, spiraling journey both to a different time in our lives and a different time in our recollections of and relationships to baseball or a specific player.

Not to get too waxing and philosophical.  At the most basic level...11,000 unique cards is a pretty cool (and insanely frustrating to organize) accomplishment.  Especially since my goal for this calendar year was 10,000 (I think I was at about 8,700 on New Year's day).  And while it's quality, not quantity...there is something magical and exciting about each and every one of the cards in my collection.  Even those hideous 1995 Fleer cards.

So here's to all of you moving ever close to those ever changing collecting goals.  After all, it's the thrill of the hunt that's half the fun.
Posted by Mark at 4:07 PM