I swear it was unintentional, but with today's black and white themed posts, I'm finally back blogging full steam.  At least for now.

Wedding week was pretty much a lost cause - without a smart phone (yes, I'm quite possibly the only 25 year old sporting a flip phone) I didn't even have a chance to check email or facebook, let alone browse ebay.

Still, I was able to sneak in a couple purchases before things got crazy.  Consider it a wedding gift from me to me.

I long ago gave up any hope of completing entire team sets of the Topps Black parallels.  From any year.  Ever.  They're just too tough to chase, and I'm never willing to shell out the big bucks at release to try to fight off set collectors, player collectors, and team collectors.  I love the look of the cards and pick them up when I can.  But there are perhaps two dozen total in my collection.

As I mentioned in the post earlier today, I haven't really felt attached to any specific player since Jack Wilson left the Burgh.  But if I had to pick a guy, Neil Walker would probably be at the top of the short list.  He's a Pittsburgh native, former first round pick, and perhaps most importantly was drafted and developed by the Bucs.  I just hate having early-year cards from a guy in another uni, which has been the biggest reason I never took any major steps towards a Jeff Locke collection.

I have a decent array of Walker cards, but on the whole my collection from the last few years has been sadly lacking.  There have just been too many high end products released that I have no interest in chasing, or cards that are more than I want to pay.  And as you all know by now, I do love the 90's. 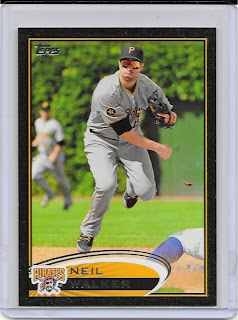 But this Walker was just too sweet to pass on, especially when I was able to win it for .99+shipping.

I've noticed a lot of the Pirate photos from recent seasons have been at Wrigley.  I know we play the Cubs quite a bit, but I wonder if there's a larger connection.  I honestly have no clue, since the process Topps uses to get their photos nowadays is equally mysterious.

Either way, this is a sweet shot of Neil turning two, prominently featuring the Chuck Tanner patch on the sleeve from 2011.  The colors really pop with the yellow near the text and the ivy backdrop.

My only complaint?  I wish Topps would have replaced the Pirate logo in the lower corner with the simple Pirates P that the team has been using as their primary logo for the past few seasons.  But with a new logo coming in a couple months, hopefully we'll have something less dated to look at.