Starting 9: Band On the Run 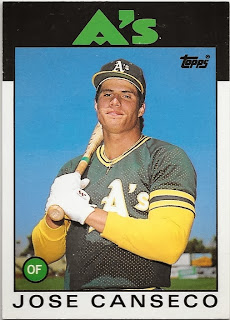 I don't know that any major league franchise has had quite the luck the Athletics have had.  Philadelphia to Kansas City to Oakland.  Some world titles.  And a stadium that looks like it could be outclassed by a A ball stadium in Oshkosh.* But the team just seems to keep winning through all of it.


*note: The author hasn't the slightest idea if there is actually a baseball field in Oshkosh.  Or people, for that matter.

One thing I love about the A's is the infinite number of uniform variations the team has used over the past few decades.  And who can't love a team with an elephant mascot?

At one point a Jose Canseco RC was the grail of collectors.  When this one came to me, it was a dime box pickup.  Oh how the mighty have fallen.  But thankfully the world has done away with those awkward mesh jerseys. 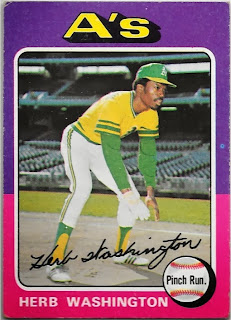 It's not every day you see a player whose position is "Pinch Runner."  I've always liked cards that have unique position designations.  There aren't many of them, but perhaps it's time to focus a mini collection of "Utility Infielder" "Pinch Hitter" and "C-OF-1B" cards. 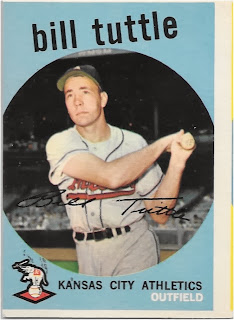 Some of my favorite non-Pirate cardboard is from the KC A's days.  Teams don't move around nearly as much as they did before sports became big business.  I'm still not sure whether I consider that a good thing or a bad thing. 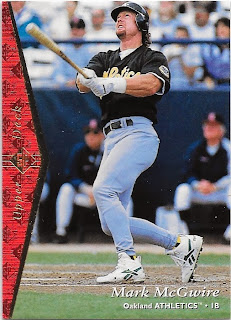 His days in St. Louis have made a lot of people forget about Mark McGwire's turbulent tenure in Oakland.  In retrospect, the haul for Big Mac was insanely low, and that kind of power would have been a huge addition for quite a few teams *cough*Pirates*cough*.  of course his 7M salary was almost equal to the Pirates payroll in 1997, which clocked in at 13M.  Oops. 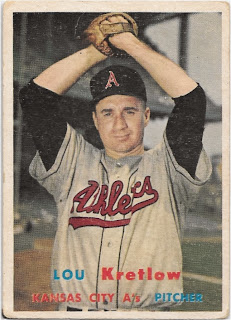 Another vintage shot of a team gone by.  There's something interesting about the dark blue/red color combo to me, and I find it interesting that neither the Oakland incarnation of the A's nor the expansion Royals utilized those colors after the A's left KC. 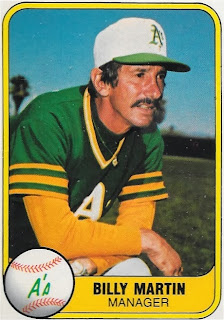 Does anybody remember the white hate the expansion Diamondbacks used in promotional material and photoshoots leading up to their inaugural season?  I have a few spring training photos of the club wearing them, but the hats never seemed to make it into regular season action.  I've been looking for info on that story for years with no luck.  Regardless, Billy Martin.  White hat.  It's related, I swear! 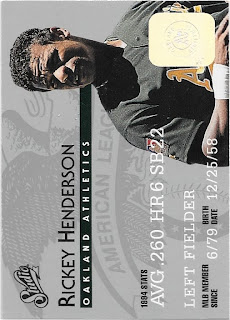 Rickey Henderson is a man of many hats.  But I think most will always look at him as an A.  But take a look at that very un-HoF stat like.  .260, 6 homers, and 22 steals?  The Man of Steal looked like he has lost his touch in '95.  Of course he would somehow manage to hang on for almost another decade.  A decade!  Plus another stop in Oakland. 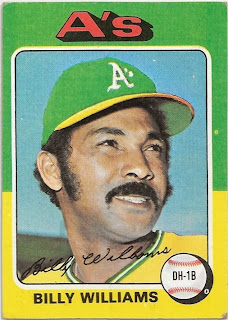 Honestly I had no idea Billy Williams played for the A's.  But I do like the DH-1B position designation. 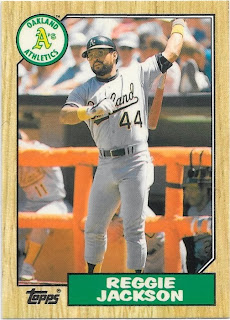 Wait, wait, wait.  Reggie played for the A's?  Apparently the bargain bin hunting A's attracted more than a few post prime superstars (Mike Piazza?  Frank Thomas?)  This one is of the Topps Glossy variety.  Guess Mr. October is full of surprises.
Posted by Mark at 9:48 AM