Do It For the Kids 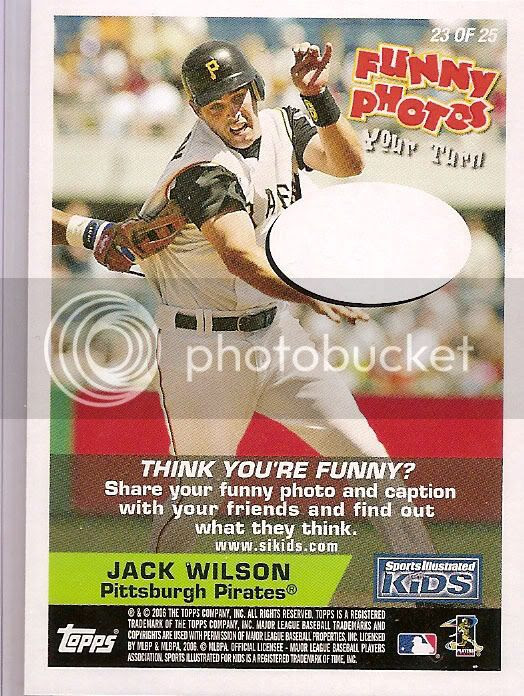 I don't think it's any secret that this hobby isn't exactly for the kids these days.  As hits continue to replace....actual cards, and boxes of product holds more fabric and ink than cardboard, it shouldn't really shock anyone that this isn't a hobby specifically designed for and marketed towards kids.  But card companies continue to make the faintest of efforts to reach out to that kid demographic.  And for good reason.

But it's sort of hard to me to take any of that at face value when those same companies are dropping $400 boxes like they're Hersey kisses.  The result?  Something that's more laughable than anything.  And while I don't claim to be an expert on what would or wouldn't market toward kids today, I can safely say that a good shiny insert or some foil would always win out over a design that looks like it came from the shattered skull of Bozo the Clown.

So in the "what the hell are you doing?" file, cards.  For kids.

The SI for Kids insert set from 2006 Opening Day may be the hands down winner.  Caption your own photo?  Sure, a staple of kids magazines for decades.  Caption the photo in a text bubble large enough for only professional calligraphers?  Not so kid friendly. 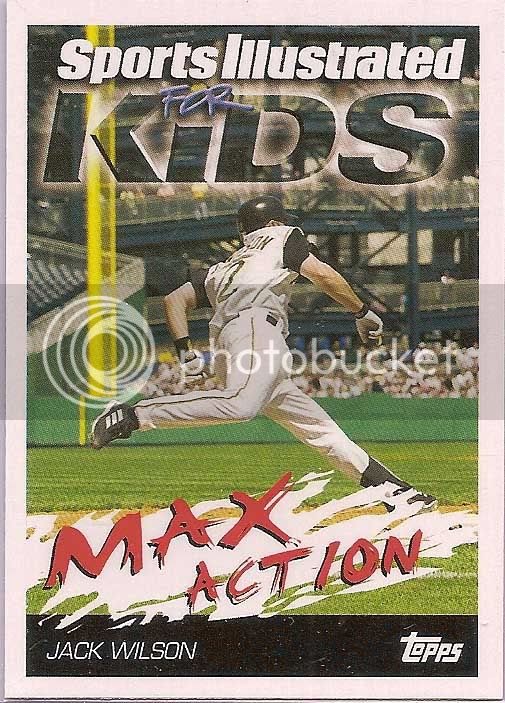 This card?  It may simultaneously be everything right and wrong about trying to market cards to kids.  You have a stunning action shot at a relatively unique angle.  A card of one of the more popular Pirate players at the time, and one who had a ton of appeal to younger fans.  And you even have a nice little SI for Kids graphic at the top, just to keep your cross promotion going.


And then you have to go all "I just discovered MS Paint" on it.  What's up with the eraser action at the bottom?  And why in the world is Max Action scrawled in blood?  Did Sid from Toy Story grow up to become a statanist who also collected cards?


But it's just Topps, right?  Hell, they've been finding good ways to screw up cards since 1951.

In the early 1990's Triple Play was indeed a very fun and kid friendly brand.  And while I do find a horror film-esque shot of Andy Van Slyke a bit creepy in retrospect, it didn't seem thaaaat creepy at the time. 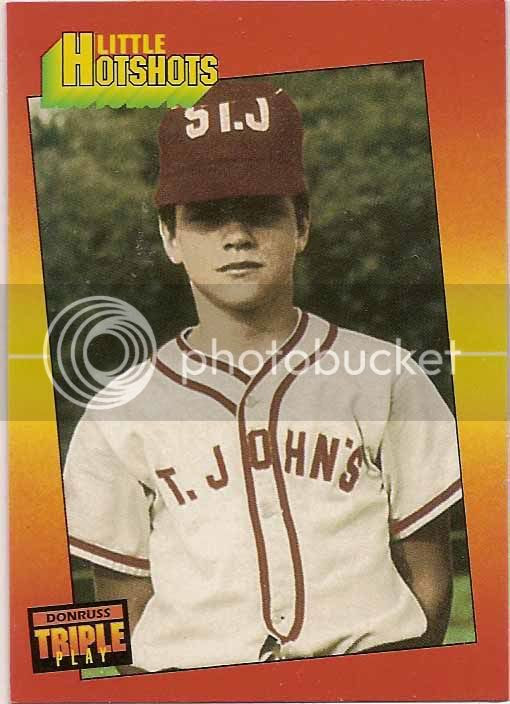 Somebody call Mulder and Scully.  We just found our little green men.  And apparently they play baseball.  I'm not sure how exactly this vaguely representative caricature is supposed to represent Pedro Alvarez.  Or baseball (by the way, what's up with the whole "turning every single uniform black since we've been blackballed out of an MLB license" thing?).  This little critter could just as easily be the dude who rang me up at Target Saturday or the new look for a new line of Chucky movies.

But perhaps if we cover every square centimeter with text, graphics, and disturbing art the kids will just gobble it up.  After all, they've been on media overload their whole lives anyway, right?

If and when Kate and I ever have kids, I'll start 'em on the good stuff.  A wax box of 1993 Donruss, and ABPA baseball.  The kids will thank me some day, after years of intensive therapy.
Posted by Mark at 10:38 PM

Email ThisBlogThis!Share to TwitterShare to FacebookShare to Pinterest
Labels: I love the 90's, Jack Wilson