The Oddest of Oddballs

With so many cards out there to chase as it is, I've never really been a fan of many of the off-brand oddball cards that came out in the 80's and 90's.  Sure some make interesting novelty pieces, but overall the cards just scream knockoff.

Whether it's airbrushed logos, terrible designs, or paper thin card stock, they just don't do much for me. 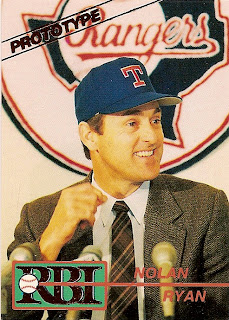 I picked up a large lot a few years back.  Mixed in were a few large stacks of these RBI Prototypes, including all of the biggest starts of the early 90's (except of course Bonds, whose card I would have actually wanted).

See all of the above commentary.  Paper stock that could pass as toilet paper.  Designs that any modern day photoshop amateur could surpass in minutes, and...wait.  A cool photo?

Most of the cards were lackluster at best.  But this Nolan Ryan card just screams awesome.  Clearly the photo comes from some kind of press conference.  Maybe his introductory presser after signing with the team?

Either way, it was a nice little gem in a otherwise unexciting stack.